As I was doing a bit of research online I stumbled on this Children's Corner page 311 from the American Farmers' Magazine 1858. And, frankly, there are a lot of words that look totally foreign to me. I've underlined them, below the excerpts I'll do my best to guess their meanings. Where there is a blank, that means I haven't the foggiest idea. 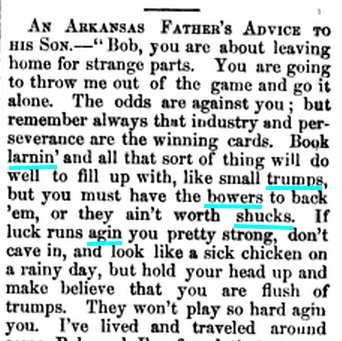 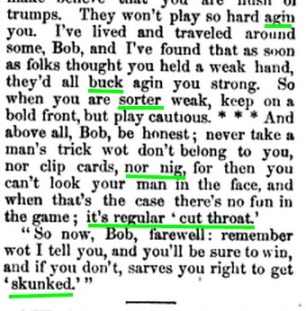 I love the expression: (don't) look like a sick chicken on a rainy day

Is it a well-known idiom in the States? Or is it unique to this article?

I think the theme of cards/life being a card game and playing like an honourable man is where this collection of words comes from.

Are these slang terms still used in the USA, or have some become dated and almost quaint? Are these terms regional or widespread?

Not most of them. In the south, they might say agin'; buck is well known, as is it's a cut throat world.

I never hear of "Don't look like a sick chicken on a rainy day".

Although I am uncertain as to this excerpt's original publication date, I have found the full article reprinted widely in newspapers around the country beginning in 1858 and then in many, many newspapers beginning in 1858, with a flurry of reprinting in October and November 1860.

Generally, the article has a prefatory title to what is mentioned here: The Game of Euchre and Life: An Arkansas Farmer's....

Thus, the responses that indicated terminology related to Euchre is on mark. Indeed, the entirety of the article would need to be understood within the context of the card game Euchre.

There are other Euchre references in the passages:

"throw me out of the game and go it alone" refers to a partner possessing a sufficiently strong hand to play the opponents without the assistance of his partner; winning all tricks in the hand would score the highest score possible for a single hand, 4 points.

"sorter weak" refers to a weak hand or a "sort of weak hand," which is a characterization of the cards held by a player in any given deal

"nor nig" is certainly reference to "reneging," which, within Euchre, is what an action is called if a player does not follow the suit of the card led. It is considered cheating. If this is discovered during the course of that hand of cards in subsequent tricks, the opposing team is awarded two points.

"cut-throat" refers to a particular variation of Euchre, in which three, rather than four players, are participating. There is no partner or help and everyone is out for themselves.

"skunked" is the term used when one pair of players fail to score any points against a victorious team in a game to 10 (today, although in the mid-19th century, the victorious pair usually won when they reached the score of 5.)

I can answer most of those.

Your interpretations of items 1 and 7 are correct.

'Buck' can mean to writhe like a horse attempting to throw its rider, and also to oppose or resist in a more general sense. I take 'to buck agin you strong' [= strongly] as using the image of the former to convey the sense of the latter.

'Shuck' = the discarded husk of a vegetable, such as that which encloses an ear of corn (i.e. maize).

'Get skunked' = to lose a card game without winning even a single point/trick, etc.; this also fits in the context of the text you posted. (My Colorado-born wife also uses the term in that sense.)

On page 3989 of the Century Dictionary, I found several senses of the word 'nig'.

One of these is as a variant of the verb 'niggle'; one is as a verb meaning 'to be niggardly'; another is as a verb variant of the masonry term nidge, meaning 'to dress (a stone) with a pick or kevel' (kevel = a particular type of hammer); and what I originally suspected might be meant in the reference you found in the text, namely 'to clip (money)'. This sense of the verb is apparently related to the English dialect noun nig, meaning 'a small piece or chip', which is clearly relevant both to dressing stone and to clipping coins (in the days when some coins were made of gold or silver).

This explanation seemed plausible, given that it follows on immediately from a reference to clipping cards.

However, Robusto has provided an explanation in his comment that fits the card-playing context better still. I quote it as follows:

"...I believe nig is a shortening of the word renege, which means to trump a card instead of following suit when you still have a card of the led suit in your hand. For example, if someone led hearts and you had a heart you would be required to play a heart. If you trumped the trick instead (which is permissible only if you are out of the led suit), and were later caught at the subterfuge, you would be said to have reneged. Saying "don't nig" is another way of saying "don't cheat." "

On page 646 of the Century Dictionary, I found that one of the meanings of 'bower' is 'jack or knave', two of which are the highest-value cards in euchre.

So the father is telling his son that he must have the bowers (high-value cards) to back the low trumps; I assume the reference to the low trumps is therefore also in the context of playing euchre.

Finally, on page 2022 of the Century Dictionary, I discovered that 'cut-throat euchre' is a three-handed euchre game "in which one person plays against the other two together".

But exactly what the comment "it's regular 'cut throat' " is supposed to imply in the context of the warning against dishonesty that has just been given is still rather mysterious to me, beyond my inference that it too alludes to the game of euchre.

You need to consider the fact that your source, American Farmers' Magazine was published in New York. I have family from Arkansas, so I know they talk funny -- but seriously folks, not like that. Here you can read an authentic Ozark mountain newspaper of the same era, and get a more realistic impression of their dialect: An extensive list of historic Ozark regional newspapers.

You will find numerous 19th century abstracts from an established Northern Arkansas newspaper, The Mountain Echo. These were painstakingly preserved by genealogists. They were so intent on accuracy, that whenever something was illegible, they refused to allow guess-work. Instead, they just used ellipses to cover unreadable portions.

A reporter met Senator Jones last evening and asked him plainly why he remained in Detroit. "I will not be interrogated on any except public questions," he replied. "There have been intimations in various newspapers and injustice may have been done you." "I want no vindication. I am not the only Senator who has been away. Cameron went to Europe and Logan was in Illinois during the session of the legislature, and I do not see why I cannot do as others have done. It is nobody's business." "When do you intend to go to Washington?" "That I won't say."

Although a senator was quoted in the example given here, he was an Arkansas senator (so most likely also a farmer). I've read these papers extensively, and can say that you will find occasional quotes from farmers, and lots of humorous tall tales written in authentic dialect.

Also keep in mind that the newspaper (in print for 80+ years) was locally read by a mostly farming, very rural community. Even doctors and other professionals were usually also farming in that region, in those times. The publishers knew their audience, quite intimately, and did a great job of reflecting their personalities, speech, and mannerisms.

Not the answer you're looking for? Browse other questions tagged phrases meaning-in-context american-english slang neologisms or ask your own question.

4
What does the verb "nig" mean?
5
Seeking etymological explanation of card game Euchre based on its spelling