Is there a saying or proverb for a situation where the weakest party will always lose?

Context - One might use it in the following situations:

You can say it to your son/daughter as a prediction: “Be careful mate, remember…(the saying)…

And you can also say it when he/she comes to you for comfort and support: “I told you, mate, they say that........(the saying).

is a proverb that comes out of gambling, where the house, the people running the gambling establishment, are setting up the rules so that they themselves are favored.

There's an English proverb that seems to cover this situation (ironically or otherwise), namely:

which also exists as

The explanation plus example at thefreedictionary.com reads as follows:

The belief that you can do what you want because you are the most powerful person or country:

To allow this invasion to happen will give a signal to every petty dictator that might is right.

One popular⁷ saying for this is

Part of the lyrics for a song about this appear on a mudcat.org webpage. The chorus:

⁷ I should, perhaps, add the qualifier “among those who specialize in sayings or proverbs about situations where the weakest party always loses” after the word “Popular”. Numerous comment votes below suggest it isn't well-known in general.

There is a proverb for this:

The weakest go to the wall

From the book "The Facts on File Dictionary of Proverbs" By Martin H. Manser (2007): 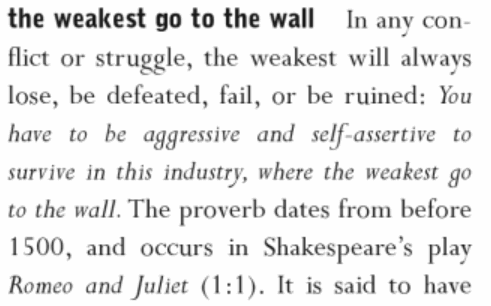 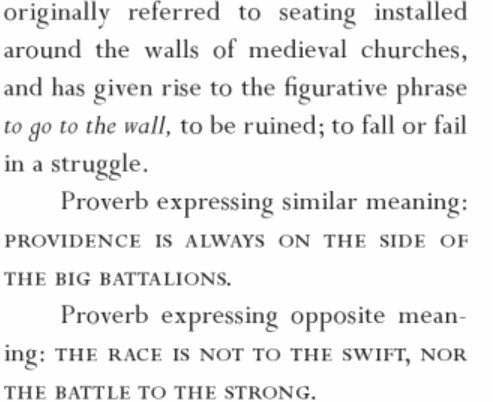 He who has the gold makes the rules.

I can't find a reliable origin for this, but it seems common in political and economic criticism. It appears to be a perversion of the Golden Rule.

Better to be the windshield than the bug.

I'd put it this way:

Be careful, mate. You know the rule at Manor Farm: "All animals are equal, but some animals are more equal than others."

This quasi-proverb is the single, catch-all commandment at the reconstituted Manor Farm in George Orwell's Animal Farm (1945).

The primary stress is that of ruthless competition, but in my mind that carries a strong implication: with decorum and ethics out the window, all that’s left is to determine who is stronger.

Either of these can be employed positively by someone in favor of the situation, but this second phrase is especially complimentary of those who find themselves in power.

I am reminded of the Damon Runyon quote:

"The race might not always go to the swift, nor the battle to the strong, but that's the way to bet."

"Bringing a knife to a gunfight".

The Boss is always right.

In business, which applies well to your first and third examples, there's an old saying/joke that you might see on a mug or poster:

There are two rules:

Shortened up, you might warn a colleague before he confronts the authority figure in any situation "Careful, mate. The Boss is always right."

Rule #1 has some interesting theory: 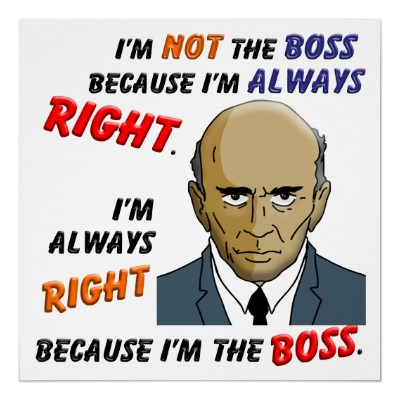 How Rule #1 is typically applied:

Alternatively, "The house always wins" is very good and has already been mentioned.

Another also mentioned "Whoever has the gold makes the rules" which seems close but not exactly what you are looking for. Along the same lines is "Nice guys finish last." Another close one is "Don't rock the boat."

The original question and associated examples have one more common thread (aside from weak vs strong) and that is that the weaker party is the social beneficiary of the strong.

In that case, 'don't bite the hand that feeds you' comes to mind. The advice is, then, not to oppose the authority on which you're dependent.

This is a commonality that I think the other answers missed. The true caution that needs to be conveyed is that, even if the individual argument is won, the superior power will enact revenge in some way and the end result will be a net loss for the weaker, dependent party.

Two proverbs that directly address this:

One that seems to have been missed:

The Devil take the hindmost

A proverbial phrase indicating that those who lag behind will receive no aid.

Origin: The line was first recorded in print in Beaumont and Fletcher's tragic/comic play Philaster, or Love Lies a-Bleeding, 1611

All three of your examples involve disputes with the so called "powers that be."

This is why they say the best advice in such a situation would be to "choose you battles carefully," mate.

But the title of your question gives no hope of winning, so when David meets Goliath; no bookie went out of business betting on Goliath.

I always liked "It's not final because it's right, it's right because it's final" Might be a little bit of a stretch from the question, but could be applied in each of the examples

Sometimes actions done with the best of intentions backfire and have unexpected and usually negative repercussions.

The three examples you give, however, are not similar to each other in the motivations ascribed to the actors.

In the first example, the working girl has an argument of unknown character. Was she unprofessional? Was she airing a legitimate grievance? If the former is the case, then she was in the wrong and was fired for her insubordination. If it is the latter, the employer is in the wrong and is guilty of wrongful termination.

In the second example, the student goes over the teacher's head to confront the teacher's superior, who cannot takes sides either out of fairness to the teacher or out of sheer laziness. This example is least like the other two.

In the third example, the workers may or may not be striking for legitimate reasons.

The Nail that Sticks Out will be Hammered--Japanese proverb

A chain is only as strong as its weakest link.

Somewhere it means that, if chain breaks it would be due to its weakest part.

There is a proverb in malayalam lanugage(lang in kerala, india) like

"where there is flesh, the knife moves"

I heard this as my grandma says..

Not the answer you're looking for? Browse other questions tagged expressions popular-refrains proverbs or ask your own question.

0
Is there a saying or proverb for a situation where the weakest party will always lose?
0
"Evil always wins because it stops at nothing": A phrase or expression to reflect that ideology

2
Is the expression “Be flattered that” right? Couldn’t it be “Be flattered to do sth.”?
5
Proverb for Someone will work, but another will get the benefit
2
English folk saying or proverb involving the number four (of people)?
0
Proverb to explain the given situation
1
An expression that expresses I know someone can do their job
2
Is there a proverb/saying which means “good people are always treated terribly and unfairly"?
0
Is there a proverb, idiom for "those only who in line of fire only understand the agony"?
0
Phrase or expression to describe intentional upward discrimination when the favorable situation comes along
1
What is equivalent of "pottakkannente Maaveleru" means blindman throwing stones in a waterless well, but he thinks he is throw stones at mango tree