Is there a term for someone performing worse at something because they are being watched?

Is there a term for a person performing worse at something because they are being watched?

For example, a person makes more mistakes typing when someone is watching over their shoulder?

I've considered the Hawthorne effect and observer effect as an options, but they seem to relate to specific experimental, information technology-related, or physical (as in physics) situations rather than daily life.

I don't think stage-fright applies to the example, because the decreased performance is not driven by anxiety.

Edit: I've seen people very at ease in a one-on-one situation still make more frequent typos when I watched them and vice-versa. Neither they nor I were anxious.

Idioms, single-word answers, and short phrases are all acceptable answers.

There is the term choking in psychology. It is performing worse under pressure or if you are expected to perform well. It is also mentioned that, if you are being watched when you are performing a task, it means that performing well in this task is important. Thus, people perform worse.

The term choking is usually used in sports but you can choke in social interactions or anywhere.

Below is an explanation of choking and an example from the book "The Curse of the Self : Self-Awareness, Egotism, and the Quality of Human Life" By Mark R. Leary Professor of Psychology Duke University (2004). 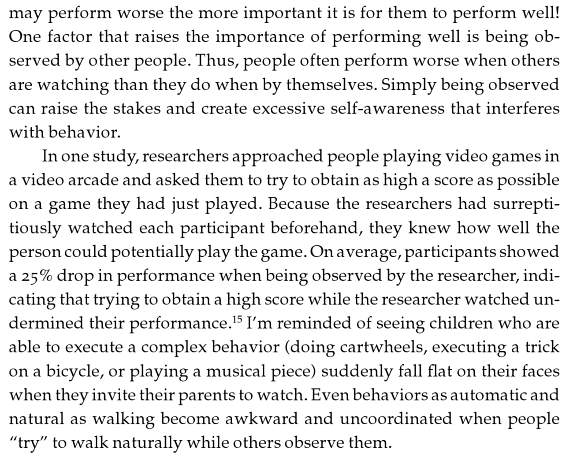 Social loafing is a related term also. It is not exactly about being watched but you perform less when you are in a group or if there are people around.

In the social psychology of groups, social loafing is the phenomenon of people exerting less effort to achieve a goal when they work in a group than when they work alone.

I know you disqualified "stage fright" because it relates to anxiety, but is the effect not anxiety-driven?

I do seem to remember some research about both typing speed/accuracy and shoe-tying speed when being watched. I have failed to locate it...

How about under pressure or pressurised?

I think 'self-conscious' expresses this.

Example: 'when the man appeared before the panel of judges he became self-conscious and fluffed his lines.'

It means that he became aware of what he was doing and that somehow... put him off doing it.

5
What's a good idiom to describe someone who is included in a group only because they have something the group needs
29
Word for winning because the competitors were miraculously all worse
2
Term for being mad at someone for something you know they didn't do
13
Term for "to have a hidden purpose for being involved in something"?
2
Is there a way to ask someone if they've gained knowledge from something new they experienced?
1
Elegant English term for performing a "fausse manoeuvre"