We know what coffee is and where the word comes from. Coffee was originally borrowed from:

The word "coffee" entered English language in 1582 via Dutch koffie,[4] borrowed from Turkish kahve, in turn borrowed from Arabic qahwa, a truncation of qahhwat al-bun 'wine of the bean'.

... but why does coffee have two e's? Shouldn't it be Coffie like its original word?

Having two e's might be not a problem for people who use and speak English but for other languages we can see people usually make mistakes between these words: coffee against coffie and coffe.

The word "coffee", pronounced /ˈkɒf.i/, is said to be a loan word from the Dutch koffie. Which begs the question why the dark red-brown beverage isn't spelled koffee or koffie with a “k”.

In Italian it is pronounced /kaf'fɛ/ and spelt caffè, and etymologists claim it was derived from the Turkish pronunciation of kahveh. The letter -k, along with j, w, x and y do not form part of the Italian alphabet which has 21 letters, consequently the -k plosive is usually represented by the letter -c. It is, therefore, most likely that the English spelling for coffee was influenced by its Italian counterpart caffè.

'Qahwah’ is the Arabic term for the coffee drink, and while scholars disagree on the exact link that led to the English word “coffee”, there is no doubt that it was an Arabic word with some connection to ‘Qahwah’. It is generally agreed that the term coffee found its way into European languages in about the 1600′s, most probably from the Italian term “caffe” which was derived from the Turkish pronunciation “kahveh” of the Arabic word ‘Qahwah’ (قهوة).

Interestingly, in German it is written kaffee, which suggests that the Arabic vowel sound ă most resembles the pronunciation of a as pronounced in Italian. Sylvestre de Sacy in his Chrestomathie Arabe (1806), believes the word kahwa, synonymous with makli (roasted in a stove), holds the key to the etymology of coffee. Jardin in his Le Caféier et le Café (Paris. 1895) is convinced that coffee is derived from an Arabic word, be it kahua, kahoueh, kaffa, or kahwa, and different nationalities have adapted the Arabian terms to match most closely their pronunciation.

Here below is a chart listing the different translations for the term coffee. 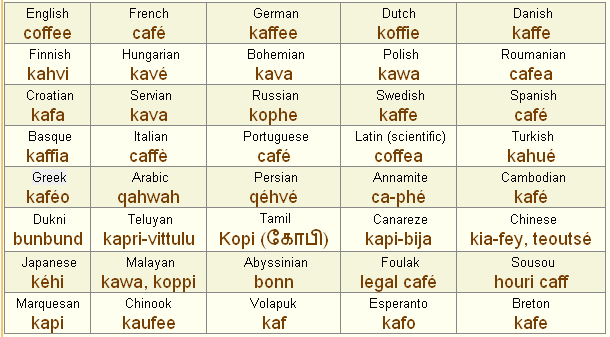 An alternative explanation could also lie in the pronunciation of the last two letters in koffie, -ie is often pronounced the same as -ee. In fact the following combination of letters; ea, ee, ei, ie often share the same pronunciation, the long e: /i/

In Italian the coffee plant is called Coffea arabica, which is exactly the same term used in English. Note the -ea spelling.

Coffea arabica /əˈræbɪkə/ is a species of Coffea originally indigenous to the mountains of the southwestern highlands of Ethiopia. It is also known as the "coffee shrub of Arabia", "mountain coffee" or "arabica coffee". Coffea arabica is believed to be the first species of coffee to be cultivated, being grown in southwest Ethiopia for well over 1,000 years. It is said to produce better tasting coffee than the other major commercially grown coffee species, Coffea canephora (robusta), because robusta cherries contain twice as much caffeine as arabica.

There is some evidence to suggest that the term coffee was loaned from the Italian caffè and not from its Dutch equivalent koffie. The author in The Oriental Herald... (1827) speculates that it was first introduced to Venice by Pietro della Valle, in a letter written from Constantinople (today, Istanbul) dated 1615. This date is confirmed by Etymology Online's entry for cafe derived from the the French term café.

A 1673 education manual for Young Gentlemen uses the term coffy-house and in the following excerpt, dated 1710, we see the same spelling repeated.

However, it was today's spelling convention that was by far the most common, barring the norm for capitalizing common nouns which ended by the late 18th century, this 1680 link proves that the spelling of Coffee had already been established. Google Ngram appears to confirm between 1620 and 1750 coffee was the preferred spelling. Further proof that the the vowel /i/ represented by double -e had been standardized before the late 17th century is seen in this pamphlet dated 1674, printed only twenty-two years after the first coffeehouse in England had been opened. 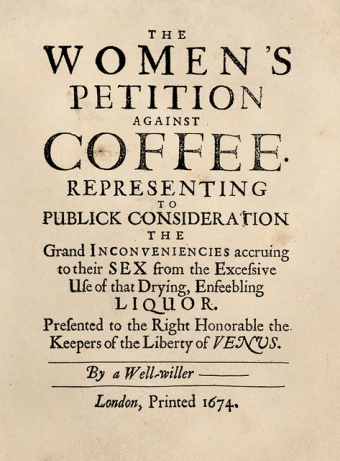 It appears it is for reproducing the sound of e that otherwise would be mute:

Actually, according to Etymonline the term comes from the Italian 'caffe' and the Turkish 'kahven'. The long-e sound is more naturally represented with a double 'e' in English

The OED registers the following spellings, just for English, in chronological order:

So, as you can see, it took a long time for the spelling "coffee" to defeat all its rivals.)

Not the answer you're looking for? Browse other questions tagged etymology pronunciation orthography history pronunciation-vs-spelling or ask your own question.

-1
Why is a coffee bean not called “coffee”?