Smoking, drinking and eating are not allowed

Because you would normally say It’s not allowed to smoke, drink or eat.

Can someone explain what is the grammatically “correct” way to say this? And maybe explain why I find it so awkward.

Smoking, drinking and eating is not allowed

would mean that if you try to smoke, drink and eat all at the same time, as one activity (good luck with that!), then that activity is not allowed.

But smoking, drinking or eating (as separate activities) would be ok.

Smoking, drinking and eating are not allowed

means that neither smoking, nor drinking, nor eating, is allowed. Collectively they are not allowed.

So the subway authorities probably do intend the latter meaning, although I'm just guessing.

Let's do a little research: 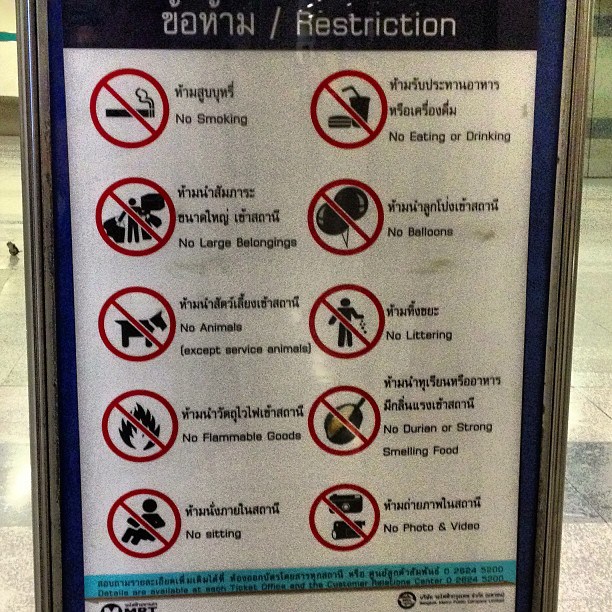 Aha. Neither smoking nor eating nor drinking is allowed. All three of them are forbidden.

The possession of balloons is also forbidden (the balloons themselves are plural but 'possession' is a single action - use 'is').

It seems particularly harsh to completely forbid 'sitting'. Is this a mistranslation of 'sitting on the floor'? Or does this sign apply only to an area without seats (such as a corridor)?

There is nothing grammatically wrong with the sentence. It is equivalent to:

"They are not allowed."

In which the verb is plural because the subject is plural.

Smoking, drinking and eating are not allowed.

Three separate activities, none of which are allowed.

Smoking, drinking and eating is not allowed.

Three activities which you are not allowed to do at the same time. But doing just one or two is okay.

Sawat-dee khrapp, khun Dan! English language signage in Bangkok & the rest of Thailand takes on mirth-inducing proportions for the uninitiated. The examples the OP cites on the MRT (subway) are tame, but otherwise largely correct, in comparison to some of the howlers one sees on the sois and byways of upper & lower Sukhumvit. Gone, but not forgotten, is the travel agent whose signage proclaimed in upper & lower cases, RIP Travel. I could never figure out if this was a subliminal warning to "Watch it, we are ripoff merchants", or some kind of morbid salutation prior to a flight out of 'old swampy' at Suvarnabhumi

Best of all was the signage in a loo at an internationally renowned hospital that requested, "Broken Man & Imbeciles: Summon help. Pull red cord". As we say in Thailand, TIT - This is Thailand!

Not the answer you're looking for? Browse other questions tagged grammatical-number conjunctions verb-agreement or ask your own question.

31
"None" as plural indefinite pronoun

6
Is it: My apples and orange are/is wrong?
3
"Changing and improving are not always the same thing" or "Changing and improving is not always the same thing"
2
Proper usage of "is" and "are" when specifying multiple nouns
0
"How are Mike and Chris?" vs. "How is Mike and Chris?"
5
Why "a" bow and arrow?
2
On the combination between "to be allowed to" and "to be entitled to"