Origin of *sheerleg* in reference to marine cranes

What is the origin of the term sheerleg in reference to marine cranes? Etymonline, most dictionaries, and Google ngrams don't have entries for this term. (OED1 (1914) has an entry for a related term, sheer hulk.) From www.collinsdictionary, sheerleg means “one of the spars of a sheerlegs” (note, shear legs “are a form of two-legged lifting device”). More helpfully, en.wikipedia says “A sheerleg is a floating crane, but, unlike crane vessels, it is not capable of rotating the crane independently of the ship.”

Anyhow, what's the origin of this term?

The spelling of this word is highly variable, with all four of these forms presenting in the historical record: 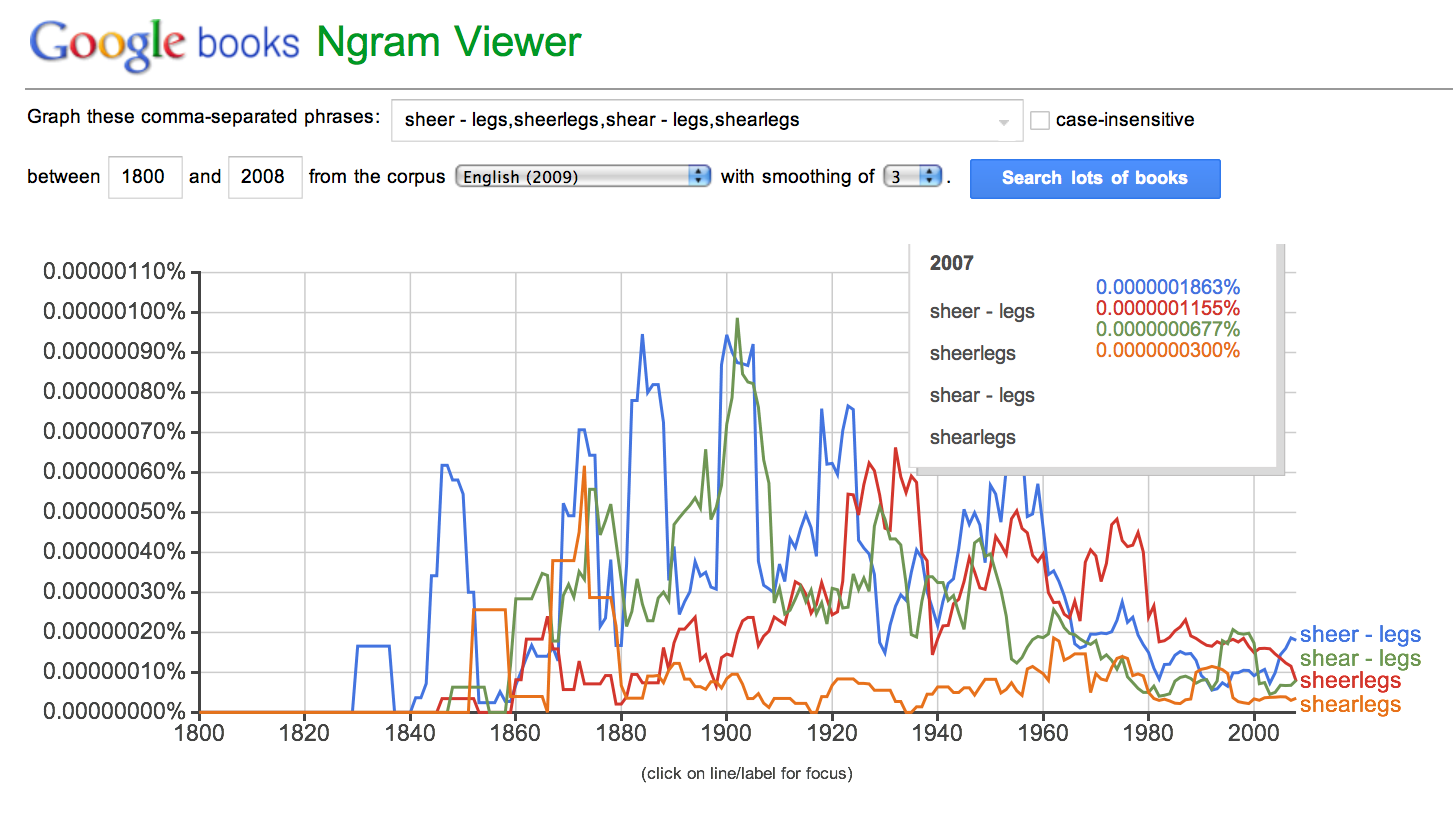 It is possible that the -ee- writers are thinking of it differently than the -ea- writers are. If so, then they’re probably called a sheerleg in Wikipedia with the distinctive double-e spelling because they stand at an oblique angle from the bow–stern line. It may also be that some people spell it sheerlegs and think of sheer, while others spell it shearlegs and think of shear. It might also be a spelling “mistake” or variation.

Anything you look up about sheer and shear becomes confused, because people tended to use the two spellings interchangeably historically. There is some nuance to be found, but much blurring of the lines, and eventually the trail grows cold.

The OED does not attest sheerleg in the spelling giving by Wikipedia, but it does include sheer- used as a combining form.

Spelled differently than given in the Wikipedia article, but apparently meaning the same device as pictures there, the OED does have have a singular count noun shear-legs that it attests as coming from the noun shear, and means:

A device consisting of three poles of wood or iron bolted together at their upper ends and extended below, carrying tackle for raising heavy weights for machinery; cf. shear noun1 sense 4.

The use of shearlegs dates only from 1860. But if you consider the sheer spelling, there is another possible origin, one related to something other than shears. The OED provides one citation from 1900 spelling this word sheer-legs:

It is possible that the writer was thinking of the combining form sheer, which is different (perhaps) from shear.

Tracing back to the spelling on Wikipedia, we find a confusion of sheer and shear. The sheer spelling is worth some exploration. Per the OED, the noun sheer is a nautical term referring to an oblique angle position with respect to the vessel’s heading — or, if you would, the vector connecting stern to bow. It is used in combining forms like sheer-boom or sheer-line.

The noun’s own origins lie in turn with the nautical verb sheer, which has these senses:

However, there the trail grows foggy and confused (which may be what you were asking about; I could not tell). The verb’s etymology section reads:

Perh. a use of shear v.; but the development of the sense is obscure.

A smaller note explains why the editors could draw no clear conclusion:

In MLG. and mod.LG., MHG. and mod.Ger., mod.Dutch (but not MDutch) the vb. scheren (etymologically identical with shear v.) often occurs intr. and refl. with the sense to withdraw, depart, ‘be off’ (coincident with sense 1. c below). This sense is commonly regarded by lexicographers as developed from the sense ‘to divide’. The word in continental Teut. does not seem ever to have been in use as a nautical term, so that the common view that the Eng. vb. is of LG. or Dutch origin is not convincing. The correspondence between the senses below and the Ger. and Dutch senses above-mentioned is not sufficiently exact to warrant the assumption that the course of development has been parallel.

To clarify; shear legs or sheerlegs is simply the name for a lifting device consisting of two spars tied together, a rope attached from the junction to the payload, and then the frame pushed or pulled vertical; it's commonly maritime but certainly used elsewhere (ask a garage mechanic). A sheer hulk is just a barge or ship with a large device mounted (formerly used to lift the masts out of other ships). I would suggest that the name came from shear legs in the sense of large scissor blades, which the device closely resembles.

A sheer is the top runner from stem to stern between the top of the sides and the deck of a boat. The Sheer leg is, as mentioned; like a crane using two or three legs and tied at the top. This allows control of lowering heavy items down into a hold, hole etc. Shear, as I know it, refers to two different things. The Shearing scissors on cloth, and shears that are hand used, or electric, when cutting the wool off a sheep/goat.