Is there a word or phrase for someone who has difficulty telling his right side from his left side?

For some neurologic reason such person can't tell right side from left side. He may have a ribbon round his wrists to save him trouble.

There is the colloquial phrase directionally challenged for someone who confuses their right and left.

There is also the phrase "Your other left" in slang. It is not used to define someone but used mockingly when someone confuses their right and left.

Sarcastic phrase; used with the directionally challenged to make them aware of their error.

Neuroscientists call this phenomenon as left-right confusion (or right-left confusion/disorientation). It is believed that there are neurophysiological explanations or it can be even related to your personality.

It is also mentioned that the brain region called parietal lobe (specifically left perietal lobe) plays a role in this phenomenon. This region is responsible for spatial sense and navigation (proprioception) and sense of touch (somatosensation).3 It is said that if you are one of the 20% that has a problem detecting left from right, you may very well have the other problems associated with the left parietal lobe.1 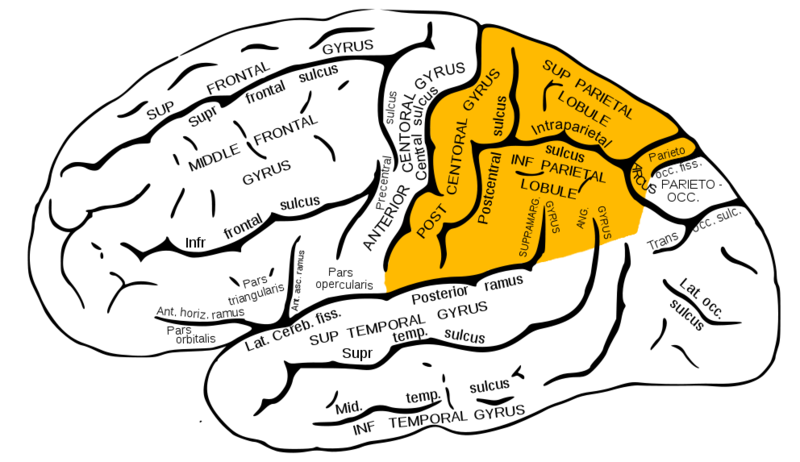 1. "Left or Right? Why Some Smart People Confuse Them" By Erin Froehlich [smartlivingnetwork]
2. "Can't tell your left from your right? You needn't worry about it" By Susan Perry [minnpost]
3. Perietal lobe [wikipedia]

How about "ambidexterous"?
Or, "ambisinstrous" if both hands are equally clumsy (two left hands) instead of equally dexterous (two right hands). [I actually found a cite for that word, and here I thought I'd made it up!]

Usually, people find it easy to tell left from right because one hand (or side) is dominant, then it's just a matter of matching up which hand goes with which term. Those who are actually ambidexterous - that is, can use either hand equally well (from dictionary.com) or even vaguely similarly - may find it harder to tell left from right because there isn't an instinctive "default" to pin those definitions on.

I myself am somewhere between mostly and partly ambidextrous, and I know it took me a lot longer to learn right from left because I had to keep thinking about it, no default to lean on (or reverse) - I might reach out with either hand based on convenience rather than conviction, and I used my watch to keep track of handedness when I was (finally) learning. So this hiccup may hold even with those who do have some preference when actually using their hands, the mixup is more about the instinct-and-impulse that says the directions (or more primally, the hands) are different, instead of the same or equal.

MeghaMegha
89711 gold badge66 silver badges99 bronze badges
1
Add a comment  |
-4
Want to improve this post? Provide detailed answers to this question, including citations and an explanation of why your answer is correct. Answers without enough detail may be edited or deleted.

Although this isn't specific to left-right disorientation/confusion, 'Dyspraxia' is a term that could describe this issue.

Not the answer you're looking for? Browse other questions tagged single-word-requests phrases expressions or ask your own question.