How can choosing to speak in English rather than French have an emotional impact on me? [closed]

I’ve grown up speaking two languages. I can seamlessly swap between French and English, but somehow I often feel like I can’t speak my mind when speaking French.

When it comes to things that are meaningful or things that are relatively important to me, I don't want to speak French: it just sounds wrong, like it’s not actually what I meant to say.

For example when speaking to my lover, or when writing an essay, or when I have to apologize, it will not come as naturally if I have to say or write it in French. It will even sound untrue. I feel free, liberated when speaking English.

Why is this so? I don’t think it has anything to do with my vocabulary because to be honest my French vocabulary is much richer. French is also the language I use the most, even though all my courses are in English.

It's common for bilingual people to feel that different languages put them in a different 'emotional register', or even change their personality.

This article from The Economist summarises:

It’s an exciting notion, the idea that one’s very self could be broadened by the mastery of two or more languages. In obvious ways (exposure to new friends, literature and so forth) the self really is broadened. Yet it is different to claim—as many people do—to have a different personality when using a different language.

Take a look at the concepts of neo-Wharfianism and linguistic relativity:

The principle of linguistic relativity holds that the structure of a language affects the ways in which its respective speakers conceptualize their world, i.e. their world view, or otherwise influences their cognitive processes. Popularly known as the Sapir–Whorf hypothesis, or Whorfianism, the principle is often defined to include two versions. The strong version says that language determines thought, and that linguistic categories limit and determine cognitive categories, whereas the weak version says only that linguistic categories and usage influence thought and certain kinds of non-linguistic behavior. ...

So, for factors innate to a language, there probably are some effects but it's controversial how significant they are.

But of course your choice of language is also very strongly influenced by the cultural context in which you're making that choice.

As you're Canadian and I'm not, I'm certain that you know a lot more than I do about the Canadian context of English-versus-French language choice, but for other readers to get an idea of the cultural importance of this issue, here is a 1963 statement of goals by Front de libération du Québec:

Suicide-commandos of the Quebec Liberation Front have as their mission to completely destroy, by systematic sabotage:

It's very noticeable that 3 out of 4 of those bullet points - written by the terrorists themselves to represent their goals - mention English-French language choice.

(I'm presuming that the statement itself was originally made in French).

For those not familiar with the history of Canadian terrorism: the FLQ killed 8 people and injured many more. Although English-French language choice was of course not the only issue, it was important in that it stood as a symbol of many deeper issues. The October Crisis is notable for our purposes in that troops were mobilised to resolve what was at least in part a language dispute: 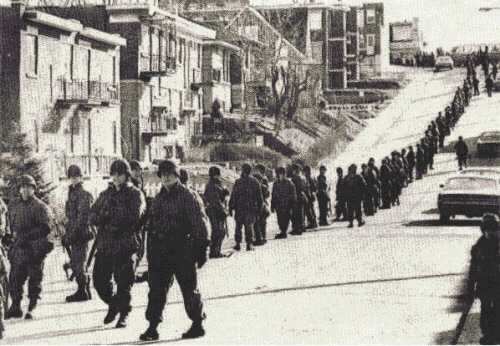 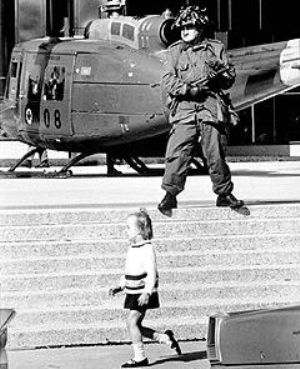 So in summary, English-French language choice in Canada is an issue which (historically) has been so symbolically important that some people were willing to kill or die over it. A small minority of people, of course - but it shows the extreme emotional importance of this issue in a cultural context. And of course acts of terrorism are - purposely - extremely high-profile in the media, so the entire adult population of Canada is likely to have at least known of these events, with a substantial minority being physically involved in them (e.g. evacuations, explosions, sight of mobilized troops) or knowing someone who was.

The issues which are bound up with this choice are ones with very strong emotional significance - issues of personal and group identity, nationality, independence, colonialism - and so on.

So given that it's so important in Canada, how could it not be emotionally loaded, at least to some extent, for you and for all Canadians? Even if you're too young to remember the FLQ and the events of the 1970s, the culture as a whole must have been affected by them - and of course the Quebec nationalism movement continues to this day.

You'll certainly have different emotional associations for the two languages. Perhaps one parent favoured one language and other other parent favoured the other - in that case each language will be (perhaps unconsciously) bound up, for you, with the virtues and vices of that parent. And this holds in many other different ways - I'm sure you can see how it works.

When a childhood in one language lacked affection or was marked by distressing events, then bilinguals may prefer to express emotion in their second language. For example, an adult English-French bilingual who moved to France in early adulthood once wrote to me that she found it easier to speak of anything connected with emotions in French, her second language, whereas in English she was rather tongue-tied. She then explained that it was in French that she had discovered what love meant. She ended by stating, "Perhaps one day I'll even manage to say, 'I love you' in English".

The Canadian and French novelist, Nancy Huston, gives a similar testimony. Nine years after having moved to Paris from North America, her daughter Léa was born. She had married a Bulgarian-French bilingual with whom she spoke French. Huston tried to use English baby talk with her daughter but couldn't continue. She explains that the memories and feelings stirred up were simply too strong (her English-speaking mother had abandoned the family home when she was six).

On a less poignant level, many late bilinguals state that they can swear more easily in their second language. Both the English-French bilingual above and Nancy Huston have said the same thing. The former stated that she has a wider range of vulgar vocabulary in French and Nancy Huston wrote her master's thesis on linguistic taboo and swear words in French. As she wrote, "The French language in general.... was to me less emotion-fraught, and therefore less dangerous, than my mother tongue. It was cold, and I approached it coldly." (p. 49).

When bilinguals are angry, excited, tired or stressed, their accent in a language can reappear or increase in strength. In addition, they often revert to the language(s) in which they express their emotions, be it their first or their second language, or both. I was once bitten by a stingray in California and I recall clearly switching back and forth between English and French. I used English to ask the English-speaking friends I was with to take me to see a doctor and I cursed in French to help me ease the pain.

Emotions in More than One Language, Psychology Today

Languages are not emotionally neutral objects, because they are spoken by people about whom we all have beliefs and feelings. Many prejudices are hidden from others and hidden even from ourselves. We may not want to recognize that we have biases and stereotypes about other people.

Conscious or unconscious choices you're making

So those are all things that affect your choice of language. But it also works the other way: sometimes you choose the language which is more beneficial to you in the conversation you're having - e.g. the language which (for cultural or other reasons) more greatly favours you or the point you're making.

Switching backwards and forward between languages within a single conversation is called code switching:

code-switching occurs when a speaker alternates between two or more languages, or language varieties, in the context of a single conversation. Multilinguals—speakers of more than one language—sometimes use elements of multiple languages when conversing with each other.

Some discourse analysts, including conversation analyst Peter Auer, suggest that code-switching does not simply reflect social situations, but that it is a means to create social situations. ...

Sometimes one language might put you in a better position to make a particular argument:

The Markedness Model ... posits that language users are rational, and choose to speak a language that clearly marks their rights and obligations, relative to other speakers, in the conversation and its setting. ... Many sociolinguists, however, object to the Markedness Model’s postulation that language-choice is entirely rational.

Another theory is that the switch itself carries inherent meaning:

Scholars of conversation analysis ... Rather than focusing on the social values inherent in the languages the speaker chooses ("brought-along meaning"), the analysis concentrates on the meaning that the act of code-switching itself creates ("brought-about meaning").

And another is that you're making an emotional connection with your conversational partner through your language choice:

Giles posits that when speakers seek approval in a social situation they are likely to converge their speech with that of the other speaker. This can include, but is not limited to, the language of choice, accent, dialect, and para-linguistic features used in the conversation.

These theories aren't mutually exclusive of course - there might be (and probably is) more than one reason in play at any given time.

Not the answer you're looking for? Browse other questions tagged french canadian-english bilingual or ask your own question.

25
Why have English words adopted the feminine version of French words with -if endings?