Is “Click bait” an Internet buzzword? How can I rephrase it?

I found a video showing a fireman who rescued a suffocating kitten from a fire smoke and resuscitated her by oxygen inhalation introduced in the article titled “Why that video went viral” in New York Times Science section (May 19, 2014). The video is really moving, and the text follows;

“Social sharing is powerful enough to topple dictatorships and profitable enough to merit multibillion-dollar investments. But scientists are only beginning to explore the psychological motivations that turn a link into “click bait” and propel a piece of content to Internet fame.” http://www.nytimes.com/2014/05/20/science/why-that-video-went-viral.html?_r=0

I thought the word, “Click bait” interesting. Is this becoming a popular word? Can I rephrase it with “Click trigger / enforcer”?

Is “___ bait” specific to Internet? In other word, can I use “bait” in combination with other motivations / impulses, like “Gamble bait,” “Investment bait,” and “Shopping bait”?

As FumbleFingers mentioned in his comment the bait suffix is predatory in nature. The only other terms, which are very offensive, are jail bait or rape bait. They are offensive because they are indicating the sexual offender was "baited" by the victim some how.

This stark contrast in trivializing the others is where click bait comes from. A headline is misleading or overly sensationalized into somehow tricking the user to click through for content.

I think it's a widely recognized term on the English-speaking Internet, but that's my culture so my perception may be biased. I agree with the comment that it suggests predation by whomever has laid the bait. Because the Internet is funded by advertising, click bait typically suggests a monetary incentive for getting "hits" (page views.)

I can't agree with atxdba's assertion that "The only other terms [using the suffix bait] ... are jail bait or rape bait." Merriam-Webster's Eleventh Collegiate Dictionary has this entry for bait:

bait n (14c) 1 a : something (as food) used in luring esp. to hook or trap b : a poisonous material placed where it will be eaten by harmful or objectionable animals 2 : LURE, TEMPTATION

There is every reason to protest against and to reject the implication that rapists—statutory or otherwise—are lured or tempted into rape by the attractions of their victims. I disagree, however, that the examples jail bait and rape bait (a term that I have never seen previously) define or exhaust the category of "NOUN bait" words.

The earliest form of "NOUN bait" that a Google Books search finds is fish bait. The earliest instances of the phrase refer to a small fish used as bait for a larger fish—a usage that is not directly relevant to the usage at work in click bait. But by 1804, we have instances where fish bait refers to bait of any kind used to catch a fish. From Samuel Freeman, The Town Officer ; or the Power and Duty of Selectmen, Town Clerks, ... in the Laws of the Commonwealth of Massachusetts (1808):

SEC. 7. Be it further enacted, That all shelled clams, or other shelled fish used for fish bait, hereafter offered for sale, shall be put in barrels or half-barrels, of the descriptions mentioned in the act to which this is an addition, and the casks shall be filled full and salted sufficient to preserve the same, and any person who shall offer for sale such aforesaid shelled fish, which are not packed agreeably to this act, shall forfeit and pay for each offence five dollars, to any person who shall see fit to prosecute such offender. [This Act passed March 9, 1804.]

And from Elijah Parish, A New System of Modern Geography (1810):

Annually they [the Sandwich Islanders] have a great festival when the taxes are gathered. The nobility are really the proprietors of the land, and the lives of their tenants are at their disposal. In some instances they kill their servants for fish bait.

I also note that supporters of Louisiana State University's athletic teams have a long history of chanting "Tiger bait! Tiger bait!" at opposing teams and their fans, as this excerpt from Giles Tippette, Saturday's Children (1973) about a 1971 football game in Baton Rouge, Louisiana, between the LSU Tigers and the Rice Owls indicates:

Some of the players could not keep their eyes from straying occasionally to the window.

An official stuck his head in the door and said, and called out, "Three minutes."

The earliest occurrence of jail bait that a Google Books search is from "Natal Notice," in Aeronautical Industry, volume 10 (1929) [combined snippets]:

Little Eva, the sweet child who greets you in the Gates Aircraft offices, is just about to turn 18. Yeppy, on Nov. 21st, she emerges from that category which is sometimes referred to as, Jail Bait. Congratulations.

This notice is probably intended to be whimsical, but today it comes across as more than a little creepy. It may be that jail bait owes its origin to another historically problematic term, alligator bait. Though the earliest instance of alligator bait that a Google Books search finds is in an article from the October 1878 issue of The United Service Magazine that uses it to refer to an adventurer who is nearly drowned by a hungry alligator. But at some point in the late 1800s the term began to be used as a supposedly witty way to refer to small black children in swampy areas of the U.S. South. It's hard to think of a more repellant "humorous" usage than that.

At the very least, click bait needs to be understood in the broader context of the many other forms of "NOUN bait" that pop up in U.S. English. It is certainly true that click bait is a derisive term: It's a hostile, dismissive way to characterize an online article that the critic believes was designed to dishonestly attract maximum clicks (that is, page views) by using an exaggerated, overheated, or otherwise misleading title and description). But in my view, bait is not an inherently sexualized term. Instead, it is suffixed to many things that are neither sexual nor inherently offensive, and those combinations produce "NOUN bait" terms that, objectively, are no more predatory than various "NOUN lure" and "NOUN trap" combinations are.

I thought the word, “Click bait” interesting. Is this becoming a popular word?

Yes. According to Google Trends: 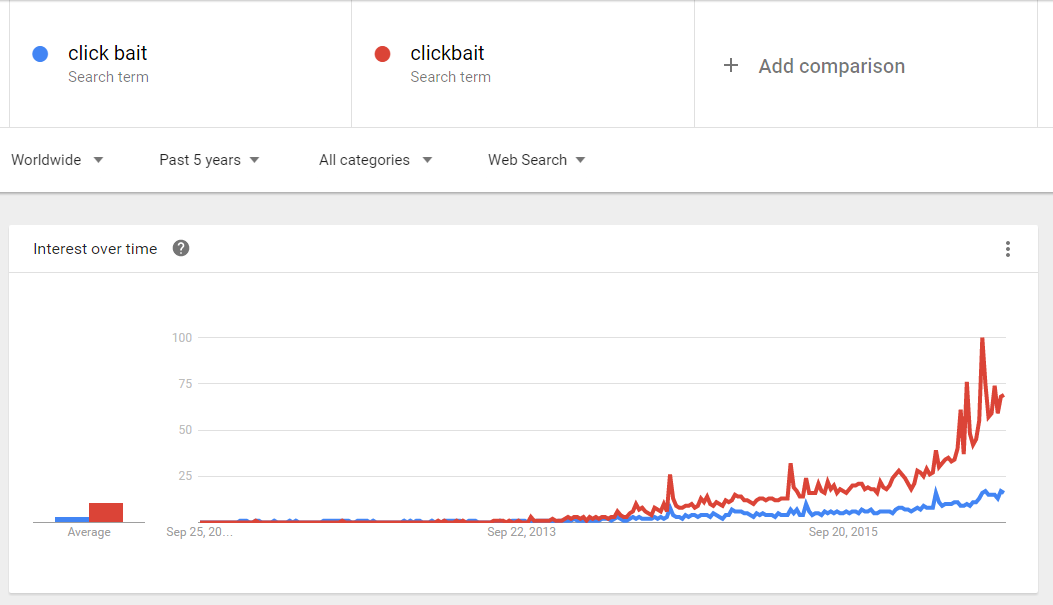 No. It's worth noting that the results for "click trigger" are mostly programmers talking about how to trigger a click event. 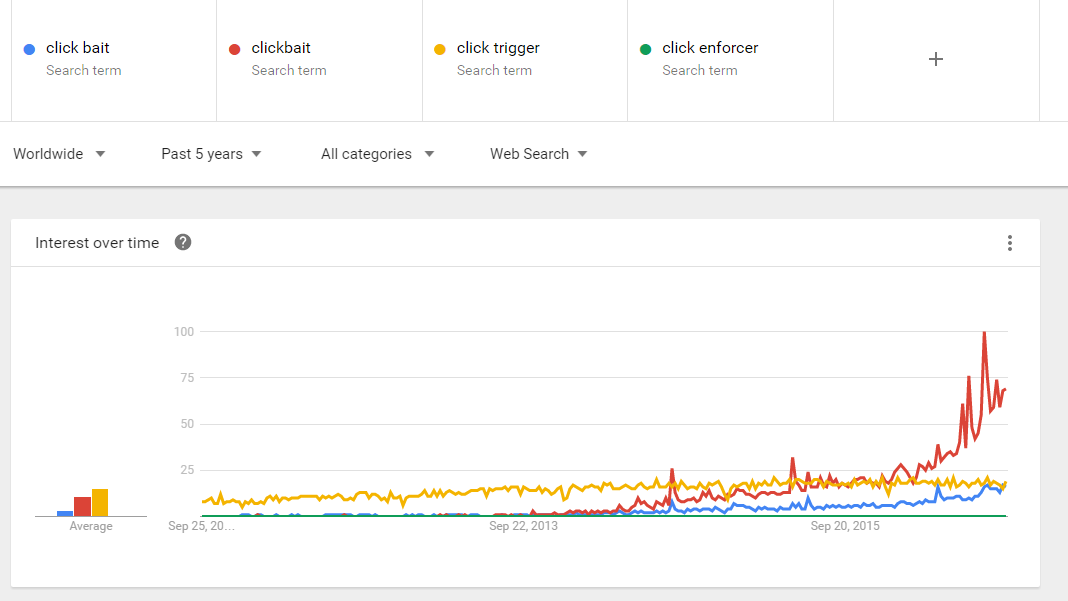 Is “___ bait” specific to Internet? In other word, can I use “bait” in combination with other motivations / impulses, like “Gamble bait,” “Investment bait,” and “Shopping bait”?

If you're going to do that, the terms would more likely be "gambler bait", "investor bait" or "shopper bait." These terms would be understood contextually, but they aren't nearly as common as the term clickbait.

Not the answer you're looking for? Browse other questions tagged meaning usage contemporary-english or ask your own question.

1
Grammar: Is it correct to say 'irresistible to click'?

3
Can you use “say” to refer to things on the internet?
1
How I can use a word of “whereas”?
3
How can one best clarify the different senses of “compare”?
4
How can empathy be distinguished from sympathy?
12
How can the word “no” be an adverb?
5
Can I say: “He took a savory bite” to describe how he acted when he bit the hamburger
0
How can I research the first recorded usage of a particular sense of a word, especially not the most commonly used sense or most 'basic' sense?