I'm looking for a word that would carry the same connotation as "Private Realm." If you can think of a good word, you can skip the rest of this.

I'm working on some architectural projects where I'm contrasting publicly visible and accessible space (whether publicly owned or not) and private space not visible or accessible to the general public.

I've decided to call the public space "Interface" -- people seem to understand this and they don't get sidetracked arguing about whether privately owned plazas etc. are "public".

I'd like to pair Interface with a single word that indicates private space, places that are not necessarily intimate but are simply not public. Basically I'm describing the difference between a front yard and the living room in a house. The front yard can be described as interface -- it's a public space (privately owned), and also a connection between the public realm and the private realm. The living room is private space. If someone walked through your front yard it wouldn't be a big deal -- if someone just walked into your living room it would be a big deal. See the difference?

It would also be fine with me to coin a new word as long as it sounds good next to "Interface" and as long as it doesn't trigger negative associations.

"would also be fine with me to coin a new word". My friend is a grad student in architecture. He tells me that both students and teachers pride themselves on making up words that no one notices were just made up. lol, so my suggestion is to make something up. Maybe innercore.

Maybe just core. although not made up, it would contradict Interface well.

Things that flow well in conversation (with Interface).

A little bit of an archaic flavor, but how do you feel about "demesne"?

This is a long shot, but how about "sanctuary?"

Granted, it would be a rather poetic use of the word, but to be honest, "interface" seems just as poetic to me.

To contrapose "interface" I would suggest "cache"; "core" flows nicely from the same computer metaphor as the place where processing happens as opposed to where input is received.

If interface is where input is submitted, the kernel is how it's received (and communicated to processing mechanisms). You could use call gate to refer to the door. 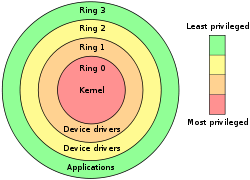 1. The innermost parts of a building, especially the sanctuary of a temple. 2. The most private or secret parts; recesses: the penetralia of the soul.

Though I am unclear of the architectural style, It sounds both mysterious and modernistic -ergo "Interface" next to "Penetralia" or IP

It all depends on how you want to do the word building in English.

Sunder means apart, different(ly), private, separate, special and readily compounds with other words. In OE and ME many compounds were found with it, such sunderland — private land. (Sunderland is now often seen as a surname.)

On the one hand, it is common to call such an area (as distinct from public) in the most easy to understand designation of just plain private. This can be seen in many places.

One alternative would be den, once again easily interpreted as a 'personal space' in most contexts.

When the stress is on the fact that it is a question of privileges, so that only an individual or a group has access rights or control of the area, perhaps a suitable word would be domain.

14
What do you call a person who refuses the love of another?
5
Single-word verb for "to keep private/confidential"
2
Single word for "finding company"
1
What's a verb that indicates a change from public to private?
3
Word or phrase when a person vanishes when you look away
0
"private space" or "private domain"?
2
Word for "doing/getting away with something only because you're 'concealed' in a big group..."
1
Is there a word or term to describe "persons, hazards, valuables, and/or features of interest" in the context of thievery/spycraft?