Is there a word that describes this gesture of interlocking hands on the lower stomach?

Specifically, I am referring to the traditional gesture some female service staff members seem to do, when demonstrating their work or their readiness to receive orders.

Also, this is the gesture Alice Cullen performs in Twilight movies on several occasions (if I remember correctly).

I could not find a photo with this exact gesture. It is similar to the one shown in the first photo, but the hands are held higher with demonstrativeness, tension, sharpness of movement and gesture itself (possibly with emotion and a smile), and military-like demeanor. The main difference with with the second photo is that in the gesture I refer to, the hands are held in the front and not in the back; also, the way the hands are interlocked is different (more like in the first picture). 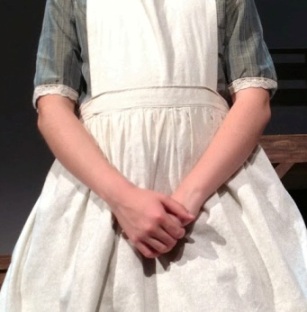 My first posting here. This piqued my interest, to the point of actual Google hunting. :) I thought perhaps the style of hand clasp is similar to how singers hold their hands. Not sure if I've helped, hindered or befuddled. 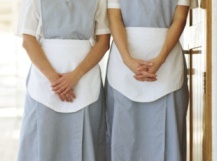 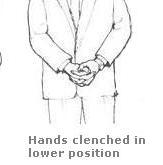 I'm posting images, so if anyone knows the correct terminology for these different hand gestures, because I've become curious myself, please post your answers.

For image No. 1, the person on the right is clasping or clenching her hands. In Image No. 2, I'd say she is holding her own hands. The caption for Image No. 3 reads: hands clenched in lower position.

Hand and Arm Gestures:
Research by Nierenberg and Calero on the hands-clenched position brought them to the conclusion that this was a frustration gesture, signalling that the person was holding back a negative attitude. The gesture has three main positions; hands clenched in front of the face, (Figure 39), hands resting on the desk (Figure 40) or on the lap when seated and placed in front of the crotch when standing (Figure 41).

Source: BODY LANGUAGE How to read others’ thoughts by their gestures by Allan Pease

I don't think there's a single word that conveys the whole pose. Hands clasped covers the positioning of the hands relative to each other, either with fingers intertwined, or with one hand covering the other. But hands can also be clasped behind the back, or in prayer, and two people can clasp hands. So "hands clasped in front" is probably as good a phrase as there is.

If you search for victorian maids in images, they don't seem to all be doing that gesture. On paintings of (hand)maidens, most of the time their hands are handling objects. Is that a specific pose or is that behavior? So I wondered specifically if maids - or women of a certain era - were taught to act in such a way or would they be generally so familiar with singing techniques as to spontaneously do a recitation handsclap in a - tenseful - way in different contexts. Consider these images:

Coronation of the Queen of England, Elizabeth II, 1953

I don't think there's any randomness here; this is an incredible show of power. Were the hand placement random it wouldn't be so twice on the same occasion. And the right hand overtaking the left comes as no surprise. This is I think a display of classic (British) etiquette. It also showcases an intuitive yet thorough understanding of the lexical, symbolic and cultural underpinnings associated with the (word) hand.

The NED provides insight: 3. In reference to action performed with the hand and hence (fig.) to action generally; thus often=agency, instrumentality[...]. - 5. As used in various ways of making a promise or oath; (spec.)[...] marriage. - 6. Hence, In oaths[...]. - 8. A person employed by any other in manual work. - 10. [...]a person[...] as the source from which something is obtained[...]+references to trust and best price. - 12. Horsemanship. - 20. A lineal measure. Usage of clean hands: freedom from wrongdoing, innocence and uprightedness of life. Of course there's come to hand, give one's hand etc. to no end. Considering the hand/arm are also heraldic symbols, and looking briefly at the countless religious references associated with cross, it's unlikely such a gesture is an attempt at crossing hands or fingers, especially not while mixing random colors.

I think it's also easy to identify that historically in the Western world the left hand was always considered suspicious or "sinister" and treated very differently from the "right" hand(see right-handed, i.e. of the right kind). Within that frame of thought if one had to be shown it should be the right hand.

The grace of repose

And the end of the 19th "Victorian" sort of etiquette. Such as holding a fork with the right hand and having the Routledge tell you how to carve(lobster would have been useful) or that [w]ashing your hands in milk and water, for 2-3 days, will make them white. There is great care for "the unity of the hands". In a document I found the following:

The nervous toying with ear-rings or brooches, or dress buttons, is another mannerism to be guarded against. The hands should learn the grace of repose. It is a great triumph of nervous control[...]

It's about acting in a composed manner, showing composure. Surely the hands take part in a graceful composition.

A. Therefore I think this is about a display of honest, serving, dextrous hands, and what composed/mannered used to mean in the Victorian era, which may seem like mannerism today.

Share
Improve this answer
edited Nov 29, 2014 at 4:41
answered Nov 28, 2014 at 21:12
user98955user98955
Add a comment  |
Highly active question. Earn 10 reputation (not counting the association bonus) in order to answer this question. The reputation requirement helps protect this question from spam and non-answer activity.

Not the answer you're looking for? Browse other questions tagged terminology gestures or ask your own question.

3
Holding your hands in a specific position