Is there a word for a fake radar reading?

Is there a word for a radar (or any other kind of detection device) reading that is known to be false?

It's called a ghost image. That link is to a scientific paper entitled:

False reading is the most common phrase. It can be applied to different kind of radars and other kind of devices as well.

If the antenna part of a radar unit is hung on the outside of the police officer's car , the beam can actually hit a side window or part of the window and a false reading occurs which will distort the actual reading for the targeted vehicle.

The RADAR system is a reliable way of measuring speed, but it is not perfect. Radar works by reflective capability. A tractor-trailer has five times the reflective capability as a standard motor vehicle. There are several factors that influence RADAR. If the operator is not familiar with these factors a false reading could be obtained.

Defending Your Ticket in Court 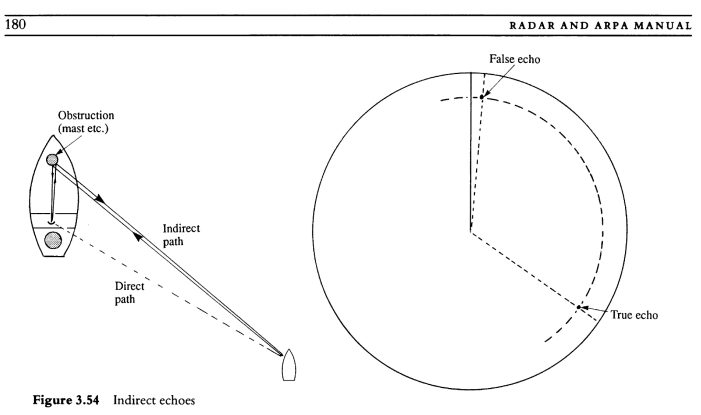 You can read further in this book:
Radar and ARPA Manual By A. G. Bole, W. O. Dineley

The term false echo is used in meteorology radars too along with anomalous propagation (AP).

That is 'clutter'. The word is sometimes used specifically to refer to the nearby wave-peaks which can be picked out by marine radar.

1946 Electronic Engin. 18 267 Sea clutter, caused by echoes from the tips of waves and broken water.

The technical term for any false detection from a radar system is called a False Alarm.

A simple definition for a false alarm is found at radartutorial.eu:

A false alarm is “an erroneous radar target detection decision caused by noise or other interfering signals exceeding the detection threshold”.

Target detecting radars make detection decisions using various algorithms, and the threshold mentioned above is the composition of criteria used to determine whether the received signal is actually that of a real target.

There are a lot of factors that can go into such an algorithm, including things like the repeatability of the returned signal (is it present on a majority of the pulses?), on the doppler characteristics (some radars only look for targets that are moving, so signals from non-moving objects are filtered out or rejected) and is it at the expected range or elevation (if the target looks like a ballistic missile coming from a nearby parking lot, there may be a good reason to filter it).

Targets that don't shouldn't pass the filtering algorithm but do are called false alarms.

The article I referred to above describes some of the basics for determining what is called the false alarm rate for a radar, which is important for determining its expected performance.

Radars have been designed for many years now to disregard non-moving targets like clutter, spurious signals (including ghosts and sidelobe returns) and local interference so that they are not "detected" or recognized as targets. Occasionally the radar makes an error in its decision making and that error is called a false alarm.

Wikipedia provides a description of the false alarm in terms of detection theory and hypothesis testing that can be summarized in this picture:

When the stimulus is not really there, but the decision erroneously says the stimulus is present, this is a false alarm. In the mathematical analysis of a decision making process like this, the algorithm takes the form of hypothesis testing, where this kind of error is called a Type 1 Error.

FALSE TARGET False targets are intentionally generated radar signals intended to fake or resemble real radar signal returns with sufficient fidelity that they overcome the radar's decision making algorithms. Faking radar signals is a small part of Radar Jamming and Deception. It is also referred to as deceptive jamming or spoofing.

2
Word for "reading without melody"
7
Word for "reading carefully"
11
Word for abbreviations that have become standard words
3
Is there a word for an example that is wrong?
4
Expression/word for reading a book quickly?
77
Word for fake religious people
38
Is there a word for a message that is intended to be intercepted by an adversary?
1
Formal word or phrase for "under the radar"
1
Single word request for "finished reading" or "completed reading"