With the help of dictionaries, I’ve assembled a list of letters that can be silent in English: 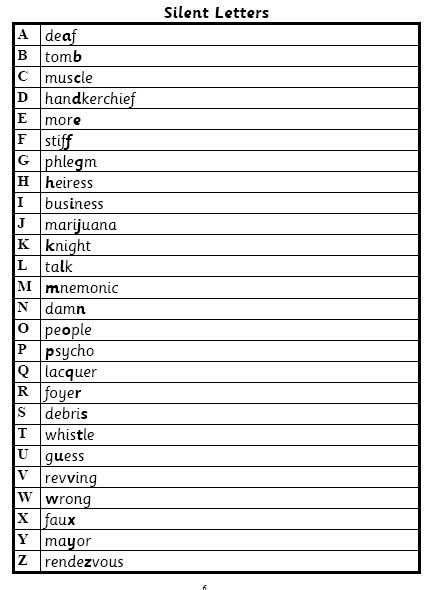 For most letters, I found more than one example, what are the other examples of a silent z (rendezvous) and silent m (mnemonic)? Also, If we can think of examples of silent Qs or Vs.

Foyer- ?, am I right about the silent 'r', though there are no words in American English. However, I read it somewhere that BrE has some silent Rs.

All letters in English are silent. Letters are visual signs, and they don't make any noise.

What you're all peeving about is the fact that

And it's true; they don't.
That's because they represent Middle English pronunciations.

Before Caxton set up his printshop in England in 1470 something, literate people speld inglish the way they spowke itt, and everyboddiz speling was diferent, juste as handewritting is nowe.

But printing always spelled the same words the same way. And so spelling got fixed before the finale of the Great Vowel Shift, which changed the place in the mouth where long (but not short) vowels were pronounced, and also totally destroyed the difference between long and short vowels in English.

So that made for lots of "silent letters". The rest are erroneous spellings (often, island), various stabs at diphthongs, and sounds that disappeared though their results didn't (all those gh spellings are remnants of the [x] allophone of Middle English /h/).

Don't think of them as silent letters. There their to distinguish things we don't dare distinguish in speech but somebody thought we'd like to know about, so we could screw them up in spelling
-- the difference between there, their, and they're, for instance.

This is a list that I, a speaker of standard southern British English, compiled some time ago:

In RP, r is not pronounced when followed by a consonant or silent e, or is word-final: lord, tire, far

Silent letter is a letter that, in a particular word, does not correspond to any sound in the word's pronunciation.

Please consider the various comments above and also these silent letters.

F/J/Q/V/Y: There are no words (I could recall) that take a silent letter.

If Etymology (the origin of words) interests you, then you’ll find learning silent letters very fascinating, as they provide so much information about the history of these words!

The original question was asking about silent "z" and silent "m"

Silent "m" occurs in initial Greek-derived mn-: "mnemonic", "Mnemosyne", but is pronounced after a prefix (amnesia).

Not the answer you're looking for? Browse other questions tagged etymology orthography pronunciation-vs-spelling phonology silent-letters or ask your own question.

6
Where did the L in talk go?
2
What is the significance of having a silent letter like “k” in a word?

23
Why does English spelling use silent letters?
5
One-letter words in English language
16
Silent “e” at the end of words
4
Is there a term for the silent letters in a word?
30
Is there an etymological explanation for the silent ‘g’ in “paradigm”?
2
Why is letter E the most common used letter?
0
Why is the L silent in “walk” but not in “bulk”?
1
Why is the P silent in “coup” and “corps”?