I need advice on the best use of the verb show.

When do you use showed? I find myself substituting has shown, even when I meant to use the preterit in my sentence.

Do you ever use "shew" and its family?

Do you ever use "shew" and its family ?

When you need the simple past tense.

Last week I showed you how to cook apple pie.

Show vs shew from the Google NGram viewer 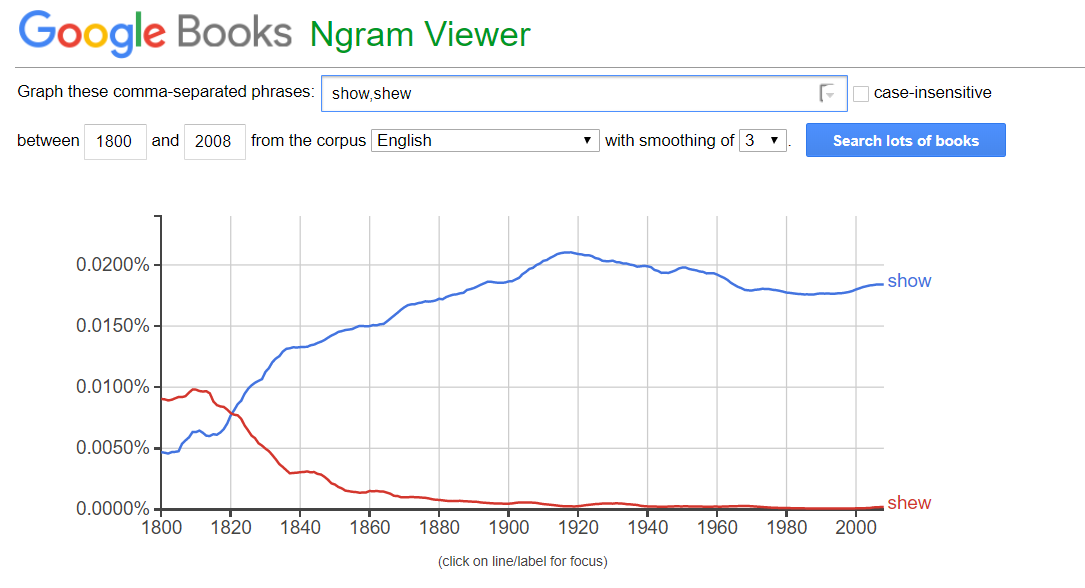 The rules of phrasal verbs apply the same for "show" as any other verb. To use "show up" using past perfect, you'd say "she has shown up" just like if you were saying "she has shown" but with "up" added afterwards.

The conjugation of the verb 'Show' is : "show -- showed -- showed / shown". [The oId & archaic spelling of 'show' is *'shew'. Its conjugation is : "shew / shewed / shewed or shewn".] The past participle "showed" is very rare. It may be used in mediocre A.E. active construction; but it should NOT be used as per standard B.E.

Active voice : I showed my camera to my friend.

Passive voice : My camera was shown (NOT, was showed) to my friend by me.

The phrasal verb "show up" means 'to arrive' : He showed up, apologising for being late'.

But the phrasal verb "show out" means 'to present oneself especially in a public and performative manner' : 'The actress always showed out with a charming and extravagant outfits.'

Not the answer you're looking for? Browse other questions tagged verbs past-participles or ask your own question.

14
"Haven't you?" or "don't you?"
2
Can the word “art” be used as a verb to mean “create art”?
1
Commas, subject and verb
5
The Term for Singing in a Very Sad Way
4
Is there a list of verbs for starting yes/no questions?
3
The verb and noun used to indicate that an error has been seen
1
"prepare" vs "do" vs "make": how to know when to use which in the "get something ready" sense