How and in what way did the Danes come to influence English?

I was looking for some insight into the farewell greeting ta on The Urban Dictionary just now, and came across this mostly excellent top-ranked answer (adapted slightly, emphasis mine):

A slang word for "thanks."

The Danish word for "thanks" is tak. In Scotland and upper England it was common to drop the at the end because of the way words were pronounced during the time of Old English and Middle English. Hence the slang word "ta" which should actually be pronounced "TA-k" but over time became "ta".

After reading that, I also remembered reading, when I was in our chat, that Frisian was the closest surviving spoken language to English, and then remembered the Wikipedia article stating that many Danish speakers are able to understand some spoken Frisian. With those facts, I hypothesized to myself that perhaps the Danes influenced both languages, before they had diverged, some very long time ago. Alas, that's all I can venture; though I know a fair bit about more modern influences on English — that is, Latin and Old French — I've haven't really seen this discussed before, which is no small wonder, as it seems that whatever influence the Danes had would have been ancient. It's also pretty strange, as compared to French, because Denmark is a bit aways from England; it's doesn't just have a narrow channel to cross, nor, if I remember correctly, doesn't share as intimately connected royal and noble lines as the French have with England.

So I guess my question is: Are the answerer's bolded words above correct? If they are, can someone offer a nice précis of how we can see this influence of the Danes, and how it came about?

The source you cite seems to confuse two different sources of Danish influence in the English Language: the Jutes and the Danes.

The confusion comes from the fact that modern Denmark and Jutland are today the same place. However it is not certain that the Jutes came from modern Jutland. Let me quote an excerpt of the book "Origin of the English Language - A social and Linguistic History" [p. 53]:

"So it was first thought that the Jutes came from what we now call Jutland; the Angles from the western side of the Jutish peninsula and the east bank of the Elbe; the Saxons from the Elbe to perhaps the mouth of the Rhine. More recent Archaeological evidence locates the Angles farther south-east and the Jutes on the coast, near the Frisian islands off the coast of Germany and the Netherlands"

As a matter of fact, the real identity of the Jutes and their place of origin cannot be reliably established just from ancient texts because they contradict each other. Venerable Bede for instance, often cited as a source lived more than 250 years after the Anglo-Saxon migrations. If you hypothesise that the Jutes migrated to Jutland after the 5th century then the Wikipedia article stating that "many Danish speakers are able to understand some spoken Frisian" makes perfect sense. After all, people migration and splitting was quite common in these times. Consider for instance the migration of Goths, splitting and then travelling to Spain, Italy and Russia or that of the Vandals: to Sicily through Spain, Morocco and Tunisia.

Furthermore, as you have rightly pointed out, the distance between the Frisian islands and England is much shorter than the distance between modern Jutland and England. The most convincing observation is that the Jutes are said to have landed in Kent... That is quite possible if they came from Friesland but less likely if they came from Jutland. The Danelaw does lie "in front" of Denmark but Kent surely doesn't.

I do not mean to underestimate the contribution of Old Norse to English; it is instead, well established. One often cites for instance many words in "sk": (sky, score, skirt, skill, scab, scale, scrap), or such important words as get, die, call, egg, raise, take. Nevertheless one has to be careful when ascribing the etymology of an English word to Danes. It could be from Danish influence or it could be of more ancient Anglo-Saxon origin.

As for ta and thank, the origin of thank is believed to be Proto Germanic (thankojan) and was already present in Anglo Saxon English before the Danish invasions. However, the Old English (þancian) and Old Norse (þakka) versions followed parallel evolution paths and met again when Danes landed in Britain. So yes "ta" looks like Old Norse indeed but it caught up because it met an already well established cognate.

It must be remembered that the Saxon king Ælfred the Great (A.D. 849-899) presided over the southwestern part of England in his time (little beyond what were then known as West Seaxe and Suth Seaxe, and that for several hundred years the Danes had the rest. Here is a map (c. 10th century) of the Danelaw (the area of Danish settlement and dominant influence). 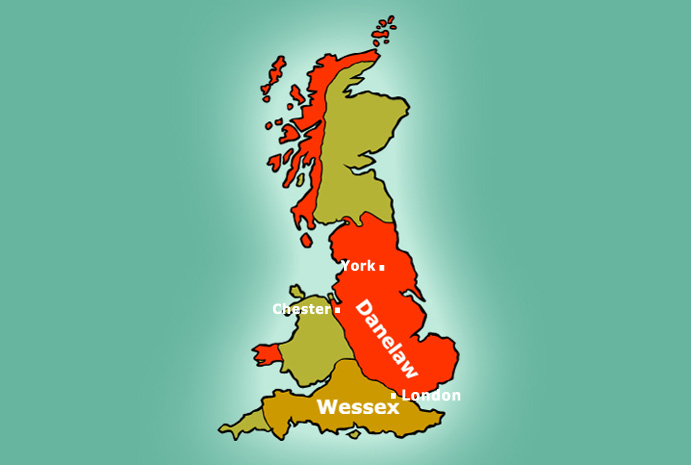 In fact, the Norman Conquest was only the second conquest of England in the 11th century. The first was begun by Svein Forkbeard, the Danish king, and was completed by his son Cnut in 1016. King Cnut (also styled "the Great") ruled all of England for nearly 20 years. It is against this backdrop that we must consider the English language to have been profoundly influenced by the Nordic tongue.

A couple more points on the influence of Old Norse on English.

The various forms of the third-person plural personal pronoun, "they/them/their" are believed to come from Old Norse þeir/þaim/þeira. I'm sure there are many other words, but this shows at what a fundamental level the language was influenced.

Also, Danish/Norse influence helped to make English simpler. It was during that period of history that the language lost some of its more difficult grammatical features - in particular declensions, the complex system of word endings used to distinguish subject from object ("who did what to whom").

Old English used a horribly complicated system with over 300 endings (5 cases × 3 genders × 2 numbers × (7 types of noun + 6 types of adjective) = 312. Plus there were additional rules for personal pronouns, and some irregular nouns that didn't follow the usual rules.

It is thought that the influence of Old Norse helped to get rid of the Old English system of declensions. Modern English (and Middle English) instead use a much simpler system of word order and prepositions.

Especially so; Northern England was very different historically and literally than the South. Until the Norman conquest everywhere north-east of roughly London-Chester was a Viking country not an Anglo-Saxon one. This is still obvious in the place names. See for example this link.

I am a Dane. I am not a linguistic expert in any way, but I came across this site and question when I tried to research why my 12-year old son is becoming so skilled in the English language without school or myself teaching him in any other way apart than how I myself was taught (I was born in 1970).

Of course most of it is about the fact that foreign-language films, including those in English, are not dubbed but subbed [that is, “subtitled” ―editor] when shown in Denmark. But another aspect is that so many words in English are so similar to the corresponding word in Danish, and therefore are easy to learn — in contradiction to those same words in Romance languages.

It is said that the English language is the easiest language to learn, and it is also said that Danish is one of the most difficult languages to learn. So maybe the question is best answered by English speakers who have had to learn Danish.

Some words I’ve heard and puzzles me in English is the word yuletide as in Christmastime. In Danish it is called juletid. And the English word gratis as in free: free is gratis in Danish.

Not the answer you're looking for? Browse other questions tagged history old-english danish or ask your own question.

13
Is the history of h-dropping in English in any way related to the silent h of French?
11
Did the "We shall fight on the beaches" speech mainly use words from Old English? If so, why?
1
How to guess the pronunciation of some inconsistencies in English?
109
How did 7 come to be an abbreviation for 'and' in Old English?
10
How did *Old* English transform into *Middle* English so quickly?
40
Did the English call a fruit “openærs” for 700 years?
96
How did English retain its non-Christian names of the week?
0
How did willa compound with cuma, to signify 'it's well you have come' and 'one who arrives at the pleasure of another'?