Since when was a double negative as an intensifier considered as non-standard and why?

In present-day English, a double negative as an intensifier is regarded as non-standard. For example I don't think that "I can't get no satisfaction" is considered standard English.

With such dexterity to incestuous sheets!

It is not, nor it cannot come to good;

But break my heart,--for I must hold my tongue!

Notice that "nor it cannot come to good" is a double negative. And Hamlet is the Prince of Denmark who is supposed to be well-educated.

Here's an excerpt from Abbot:

Many irregularities may be explained by the desire of emphasis which suggests repetition, even where repetition, as in the case of a negative, neutralizes the original phrase: ... This idiom is a very natural one, and quite common in E.E. (E. A. Abbott, A Shakespearean Grammar, Item 406, p.295) https://archive.org/details/shakespeariangra034962mbp

Since when was a double negative as an intensifier considered as non-standard and why?

The rise and fall of negative concord in English was a very long process.

Negative concord was present, but neither rare nor particularly common, in 'classical' OE. But at some time during the somewhat obscure transition from OE to ME the then OE negative particle ne was “weakened”, tending to narrow its scope in many cases from clausal to narrowly verbal negation. (Among the reasons conjectured for this are the particle's phonetic lightness and growing pressure from Scandinavian-influence northern forms.) This gave rise to an increased dependence on negative concord: a countervailing use of additional phrasal negators, particularly the new word not, which was originally a noun, a worn-down form of the noun nawiht > naught. Negative concord was ‘standard’ literary practice in the 13th and 14th centuries.

However, the phonetically heavier not almost entirely supplanted ne by the late 15th or early 16th century, and negative concord began to decline again. The process was accelerated in the 16th century with the growing literary use of non-assertive forms (e.g. any) as negative polarity items, and by Shakespeare's day negative concord was in rapid retreat. It had virtually disappeared from literary use by the Restoration.

With respect to Hamlet's use, the illustration below is of interest. It is drawn from T. Nevalainen, ‘Negative Concord as an English “Vernacular Universal”: Social history and linguistic typology’, Journal of English Linguistics 34, 2006, 257– 278, but I do not have access to this paper and I cannot vouch for its methodology or conclusions. I found it in this class handout from CUNY. It appears to show that it was the “social aspirers among the professionals” who drove the adoption of non-assertive forms, with the better sort lagging. This is hardly surprising—the Establishment, even when it is eager for literary innovation, is rarely the source of innovation itself—but it does seem to justify Shakespeare’s putting the old-fashioned use in Hamlet’s mouth. 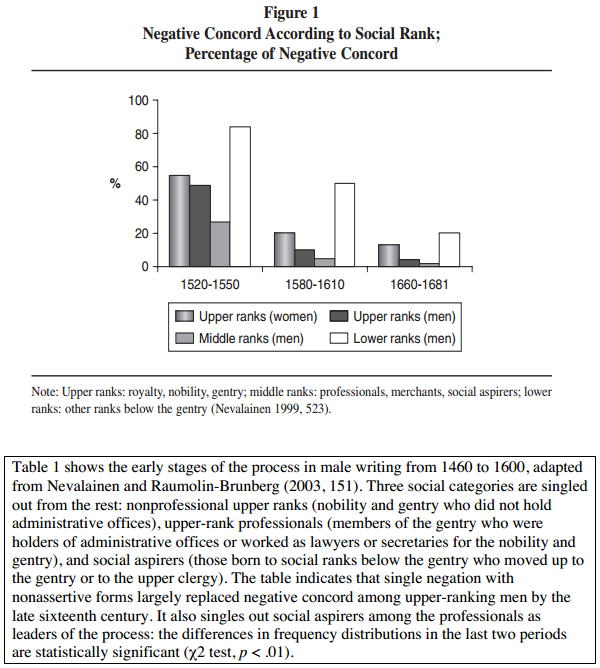 Note that negative concord maintained a significant presence in the lower orders after the Restoration. It survives there to this day.

The sentence you have cited from Hamlet does not show a double negative.

"It is not, nor it cannot come to good;" means

0
"I don't buy no drinks." Grammatically correct?
2
I don't want no robot running the empire
1
Does William Shakespeare use the double negative in the speech below to yield a different meaning, or is it just for emphasis? (Merchant of Venice)

1
"Why not" and double negatives
0
Why are "and/or" constructions in English not considered grammatically correct?
3
Double negative in "...the most dangerous threat was not not getting..."
0
Double negative as intensifier with neither
17
Why does Steven Pinker say that “can’t” + “any” is just as much of a double-negative as “can’t” + “no” is in “I can’t get no/any satisfaction”?
25
When and why did English stop pronouncing ‘hour’ with an [h] like its spelling still shows?