Is there a word for "exactly the most one can handle without being overwhelming"?

Actually "whelm" already means "to turn upside down". Overwhelm is an intensification used figuratively and means something similar to "completely turn someone's military forces, mind, or whatever, upside down".

Underwhelm does not mean that something gets turned in the other direction, but that it does not get turned at all. Etymologically underwhelm was not derived from whelm (under + whelm), but from overwhelm (under + overwhelm). Underwhelm is a quite recent neologism (Merriam-Webster: 1948; OED: 1956) from what I call "adolescent coolspeak" (the OED more scientifically calls this "jocular"). You can understand it to be the ironical neutralization of overwhelm, the undoing of the turning. Underwhelm therefore does not, as you claim, mean "less than can be handled", but rather "can be handled quite well" or, as the dictionaries put it, "fail to impress" (the audience), i.e. "leave (the mind) unturned".

Between "turn" and "not turn" there is no third option. Either you impress your audience, or you bore them.

In the context where underwhelm is used, i.e. in the context of movie reviews and audience entertainment, overwhelm is what the audience seeks and what the producers strive for: an exciting media experience, while underwhelm is the failure to entertain and must be avoided. Overwhelm in this context is the word that you look for and means the exact right amount of fun.

In other contexts, where underwhelm cannot be used, and where overwhelm has a negative meaning of "too much", the alternative has a positive connotation: your forces where not overwhelmed, you are not overwhelmed with sorrow, etc. In this context, what you look for is the calm (unaffected) and competent state.

(Over)whelm is a duality. In both cases, the too-much-is-fun and the too-much-is-bad situation, there is logically only one alternative to overwhelm, and that is "not too much", which outside of media reviews, where you can use underwhelm, does not really have one specific word to describe it, because the perfect state that is disrupted by overwhelming varies.

If you want to get away from the dichotomy of what Drew in his comment calls "to whelm or not to whelm", and name the perfect stimulation, between overstimulation and understimulation, Csíkszentmihályi (1975) calls this balance between skill and challenge "flow". And flow, in the theory of motivation, is the result of a situation that is neither overwhelming (too difficult) nor underwhelming (boring), but motivating: 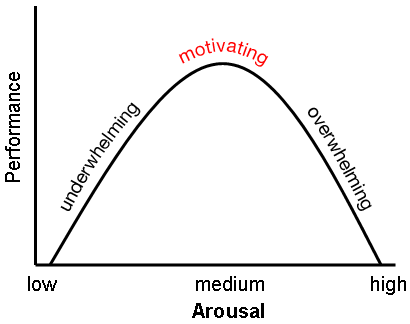 To finally answer your question, "the upper limit of what one can handle without becoming overwhelming" is

If that argument was confusing, maybe a schematic representation helps. Stimulation can be seen as a continuum from no stimulation to too much stimulation, with the perfect level somewhere in the middle:

Now, let us call "the right amoung of stimulation" RAoS, so we don't have to type that phrase every time. The sensory organs or emotions of a person receiving the RAoS, will be at full capacity:

Now, if we ask: What causes full capacity?, the answer would be: RAoS. Right?

But there is another answer to that question.

To return to the beginning of this argument, of course pleasant, inspiring and stimulating things also cause motivation, but with the general question that we are given and in the absence of a concrete case of application, motivating is the most general, all-purpose answer.

Perhaps you are looking for someone at the critical point?

10
Is there a term for a word that defeats its own purpose?
5
Is there a term for a euphemistic term being used literally?
11
What word can fulfill the most parts of speech?
2
Is there a special word for amounts between 11 and 20?
51
Is there a word similar to "reddening" for the color blue?
0
Is there one word that means the inability to remember an event?
0
Word for the act of being unwilling to forgive?
1
Word for "can become a result"
2
Word for speaking without concern for word meaning
1
One-word term for «Done with errors»