What did the master mean by: “Then thou shalt drink!”?

In The Proverbs, Epigrams, and Miscellanies of John Heywood (1562) among the many historical English proverbs which I recognized, one particular epigram stood out. Entitled “Of Catching a Fly” It isn't particularly difficult to grasp its meaning but a few expressions and one phrase had me puzzled. Here is my translation in modern English 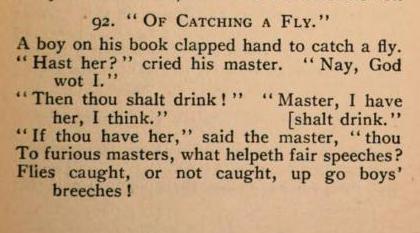 A boy on his book clapped hand to catch a fly.

Do you have it? His schoolteacher cried.

No, God knows if I have.

Then you shall drink!
Master, I think I have her.

“ If thou have her,” said the master, “ thou shalt drink ”
To furious masters, what helpeth fair speeches?

“If you have her,” said the master, “you shall drink”
To furious masters, what good comes from *graceful speeches? (eloquent?)

Flies caught, or not caught, up go boys' breeches !”

Whether flies have been caught or not, boys' buttocks go up !

breeches: I searched online for the meaning (I already knew they were a type of old fashioned trousers for boys and men) because the phrase “up goes boys' breeches” made little sense to me. I found to my surprise that the singular, breech, is a rare term for buttocks or backside.

The rest seems pretty clear, but what does the phrase, “thou shalt drink” refer to? I assume it's unpleasant because the pupil hurriedly retorts he has caught the fly, but why is having a drink a punishment? I'm guessing the schoolteacher is about to cane the boy, a typical school corporal punishment in the United Kingdom. A form of punishment which in 1987 became illegal in state schools and was finally banned in public schools in 1999. In the above Wikipedia link, there is no mention of drink being a punishment or slang.

I took this proverb to mean that a furious master will beat the pupil's hindquarters with a switch (or a cane) in any case, whether he catches the fly or not, and no matter what kind of (fancy) reply the student might give when questioned. The student has not been paying attention to the lesson but has been trying to catch flies.

I'll try to flesh this out further when I have the time (others are welcome to run with it as well), but I found this explanation of Ezekiel 23:32 wherein Matthew Poole's commentary explains that "thou shalt drink," in the context of that verse, means "thou shalt not put it by, and shift it off."

So a quick interpretation of the passage would be as follows:

A boy made to catch a fly.

"Do you have it?" asked the master.

"Then go ahead and get the fly; don't put it off," said the master.

"If you have it, what good is eloquent speech? Whether a boy catches a fly or not, out comes the rod for punishment."

I'm not entirely sure as to the justification for the punishment. I think "fair speeches" might refer to the phrase "God wot I"—that is, a fancy excuse or tacked-on phrase won't alter what has or has not been accomplished. (A further guess is that smacking after a fly isn't what a studious boy should be doing, so the master is saying that boys will be punished for slacking off whether or not they accomplish whatever trivial task distracted them and despite whatever grandiloquent excuses they might offer.)

This is only my intuition, however. There may be much better interpretations.

Here is my quite different reading, based on different glosses of wot and breeches.

The first English translations of the Old Testament appeared in the 1530's providing the first full translations of the Old and New Testaments. The very influential Geneva Bible was published in 1560, and is known as the Breeches Bible because of a translation in Genesis 7:3, where the eating of the fruit of the knowledge of good and evil led Adam and Eve to cloth themselves in breeches. I believe Knox and Calvin were involved in its production.

Actually, I imagine in another layer of allegory the fly may represent the translators of the Geneva Bible, the stent is the english monarch, and the master is good. I don't know enough of the history of the persecution and flight to the continent of the various translators to pin this down.

According to the OED, 'wot' is an archaic verb from this period meaning 'to know'. So 'God wot I' in modern English is God knows me.

See Ez 4:17, Ez 23:32 in the Geneva and possibly earlier English bibles where God is quoted as saying 'thou shalt drink' as he bestows punishment for bad behaviour. This is one reasonable sense of the 'Thou shalt drink' phrase here, and you can see the references for the extent of the punishments, i.e. drink. Basically, Jerusalem is laid very low by the hands of armies of nations she had thought to ally herself with.

There were parties for children in the 1500s when they were old enough to first wear breeches, at about 7. Up go breeches means to put them on I believe, not taken off, so I don't read the last line as an indication of the type of punishment, but perhaps it is. So a second sense of 'thou shalt drink' would be to celebrate an early coming of age. This echoes the coming of age in the Garden of Eden, and provides a meaning of furious master as the God who casts humans out of paradise for disobeying Him before they knew what was good and evil.

A major division between Protestants and Roman Catholics was over the nature of original sin, and whether it allowed for the existence of free will, and related controversies such as whether concupiscence, an ardent, often sensual desire to do things which are proscribed, is a sin itself or not.

The gist of the text seems to be that regardless of speech or act, humans outgrow their innocence and God will be furious with them. And perhaps the subtle commentary is that we will drink both our celebratory libations and the consequent punishments, whether we will it or not.

These are not fully considered views and interpretations; merely ones I hope you find helpful.

Not the answer you're looking for? Browse other questions tagged meaning british-english proverbs middle-english or ask your own question.