Word for the sentiment or behaviour of extra people putting the boot in once a momentum of social opprobrium has been reached?

Suppose someone does something a minority dislike and the majority are indifferent towards. Once the minority has struck out at the person, many of majority start striking the person out of a sense of community catharsis or joyous solidarity.

What would you call this sentiment or behaviour?

For instance, I see someone post a bad answer on a (different) stack exchange. I withhold downvoting, but then one or two people down-vote and harangue the poster, at which time I and many others start downvoting in a veritable flood; with a sense of warped pleasure that that poor poster isn't us. Isn't One of Us, at least for today.

I think it is bandwagon effect.

The bandwagon effect is a phenomenon whereby the rate of uptake of beliefs, ideas, fads and trends increases the more that they have already been adopted by others.

In other words, the bandwagon effect is characterized by the probability of individual adoption increasing with respect to the proportion who have already done so. As more people come to believe in something, others also "hop on the bandwagon" regardless of the underlying evidence. 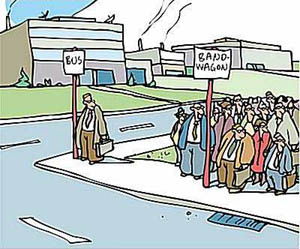 Bandwagon effect shows itself in negative situations too, of course. It is often mentioned along with your very own example about crescendo-like downvoting ceremony. [See: Google Search] [Your downvoting example is even used as bandwagon downvoting in internet jargon]

Some examples from online communities (first one is from our own meta stackexchange):

Bandwagon effect: When one user sees a post that has a few upvotes or downvotes and decides to cast his/her vote the same way as the popular opinion.

For the first few hours after a submission is created, the score is not displayed. This is intended to mitigate the bandwagon effect.

...the bandwagon effect kicks in and people will have seen the negative score before they even read the comment and the pre-judgement begins to show.

The reason I feel having it visible is wrong is because of the whole bandwagon effect it has on people. If someone sees a downvoted post, they are more likely to disagree or even ignore it because "everyone else doesn't like it so it must be wrong". The inverse is also true for visible upvotes; "everyone else likes this so it must be right".

As a bonus, some studies about the topic:

What you describe sounds like piling on. That is the practice of people joining in to attack or hurt someone, once a certain number of people has already done so. The number of people it takes for the threshold, before lots of people pile on, could be referred to as a critical mass.

The term piling on comes originally from sports.

(The term critical mass comes from the threshold amount of fissile material to initiate a sustaining chain fission reaction.)

This is often referred to as Herd mentality:

It is described in Wikipedia as:

Herd mentality, or mob mentality, describes how people are influenced by their peers to adopt certain behaviors, follow trends, and/or purchase items.

In your case, it describes how people were influenced to vote by their peers.

What you described, i.e. "at which time I and many others start downvoting in a veritable flood; with a sense of warped pleasure that that poor poster isn't us" sounds like Mobbing:

Mobbing in the context of human beings means bullying of an individual by a group in any context, such as a family, friends, peers, school, workplace, neighborhood, community, or online.

It's also called "ganging up".

According to the authors of Workplace Mobbing: Expulsion, Exclusion, and Transformation, workplace "mobbing" is not generally a familiar term—it is not well-understood in some English speaking countries. Some researchers claim that mobbing is simply another name for bullying.

6
Word for: “dislike of people that has same gender as speaker”
0
Alternative for the word “options” as in “extra purchase possibilities to go with a booking”
49
Word for software which has been killed or is no longer supported
1
What's the word for something that has a mind of its own?
1
What is a word for a topic or social discourse that has been spoken about too much?
2
What is the right word / an analogy for a “pendulum” that gains momentum with each swing?
1
Whats the word people say for when something they give you came from someone else?
0
Need a word for someone who has the need for people to be impressed by him