What is the past tense of "lightning"?

When we talk about lightning and thunder, we generally use the words like this:

But sometimes we use thunder in the past tense...

Now, how do we use the word lightning in the past tense like the word thunder? Does the verb 'lightning' have a past tense?

OED lists lightning as a verb and includes the past tense form lightninged:

1926 H. Caine in Strand Mag. Jan. 20/1 Mr. Gladstone leapt to his feet, whereupon the air of the House thundered and lightninged for a short ten minutes.

This is not some mere quotation from the entry of lighten, as you can see, it's listed explicitly as a separate entry, separate from the noun form, with a single sense. Here's it's entry profile: 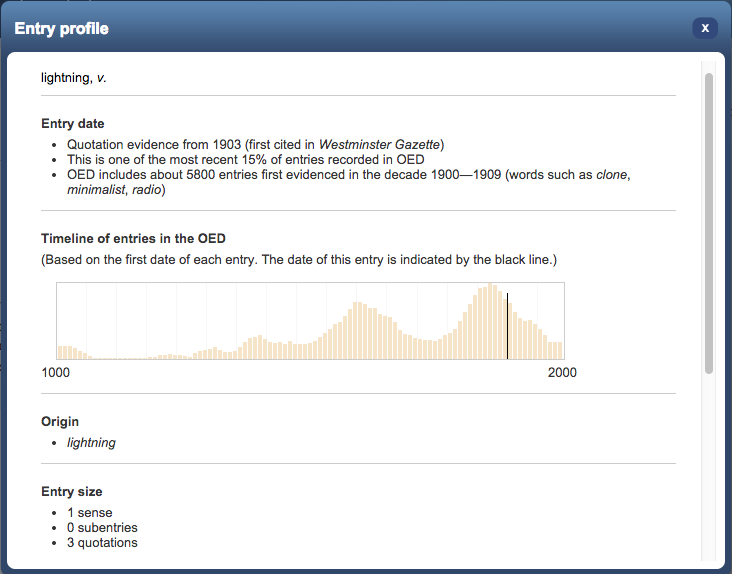 Contrary to people saying this is not a common form or inadvisable, I'm a native speaker, I use it, and can confirm that everyone around me (I'm in the US South) uses it. To me, lightened only has an inchoative meaning (that is, to become lighter) and I would never use it to refer to the electrical discharge and likely not understand it as such barring other context clues. Notice that the original citations are from England (although Edwin says it's unused in Britain these days), and the OED doesn't list it as being obsolete, literary, dialectal, rare. Curiously, for most (myself included), the present participle is invariable, although given that Urban Dictionary has several entries for it, it's possible someone uses it somewhere. Personally, if I did, since I normally pronounce -ing as [n̩], there'd be little perceptible difference between [lɑ̝ʔ.nə̆n] and [lɑ̝ʔ.nə̆n.n̩].

While I admit it may be more frequent in my dialect, it's certainly used in higher, academic registers. For example, looking at the linguistics article "What Rains?" (Bill J. Darden, Linguistic Inquiry 4.4 [1973]), the verb is used in line with other verbs in a linguistics article about a completely different topic:

Even in English there are problems that for the presumption that every sentence has a subject. In sentences such as (1), the it seems to have neither of the normal functions of pronouns:
(1) It rained (snowed, thundered, lightninged).
It is not deitic, nor does it refer to an entity named by another noun phrase.

Likewise, in another article, "Grammar and Existence: A Preface to Ontology" (from Mind, 1960, Oxford UP) we can find:

That it has just lightninged (causally) implies that it will shortly thunder. (p. 519)

In fact, you can even find a compounded past participle form of it in Judith Witt's review of two books in Modern Philology 90.2 (1992):

Yesterday was sunny and warm, then a storm struck, It thundered and lightninged, it poured, and then the sun came out again. (p. 39)

And a present simple usage since people still don't think the verb exists separately, from "Naturalism and Process" (Hegeler Institute, The Monist 64.1 [1981]):

According to Google N-Grams, lightning is the prefered verb in the phrase thunder and [lighten|lightning], though both clearly exist and are used.

Given that others seem to refute the existance of lightning[s|ed] as a verb even in spite of the clear evidence to the contrary, if you wish to use a past tense construction, your best bet is going to be to say that there was lightning avoiding the verbs entirely or use it was lightning which (I think) is acceptable spelling on both sides of the Atlantic. Besides, these days, it seems for the past few decades, most people use the "there was lightning" structure a lot more than any other form combined.

The word you are looking for is lightened.

"It thundered and lightened for hours" from Dictionary.com

Eleven more examples of lightened in use

Before it thundered and lightened, or ever the foundations of paradise were laid

On the 11th of April, 1824, it thundered and lightened considerably

@ooGloryoo me too! it thundered and lightened and poured here all night

Barely half an hour later it thundered and lightened!

The reason for this lies in the etymology. The easy-access one is Etymology Online where we find that lightning is not a verb as some are insisting, but is actually a verbal noun formed by adding the -ing suffix to lighten.

The paid access one is the good old OED that has more information. Here, we find that lightning is still listed as a noun and not a verb:

Etymology: Special use of lightening n.2; now differentiated in spelling.

1. The visible discharge of electricity between one group of clouds and another, or between the clouds and the ground. Also in particularized sense (now rare), A flash of lightning. like lightning, with the swiftness of lightning. Also in phr. †in less than, †to last no longer than a lightning .

Note that the etymology is the same a lightening. So... we take a look at what OED has to say about lightening:

a. The shedding or shining of light; suffusion with light, lighting up; fig. enlightenment, illumination.

Here we see that lightening is again a noun, formed by adding the suffix -ing to the verb lighten.

In simple terms, Etymology Online and the Oxford English Dictionary both tell us that lightning is the -ing form of lighten. Adding an -ed suffix to a word that already has an -ing suffix is obvious nonsense.

Staying with OED, if we search it for lightninged, it has no entry. It returns only two quotations from early 20th century gazettes:

1926 H. Caine in Strand Mag. Jan. 20/1 Mr. Gladstone leapt to his feet, whereupon the air of the House thundered and lightninged for a short ten minutes.

This confirms the Ngram result that lightninged is not in widespread use.

Maybe this is dialectal because i couldn't find it anywhere but growing up I always heard It's lightninging for the present progressive tense and It lightninged for the past.

In reading the above comments, I can't figure out how people come to their conclusions. The word 'lightening' and 'lightning' are two completely different words. You can use the root word 'lighten', but there is no root word for 'lightning'. That IS the word. Merriam Webster definitely has different definitions for each of the words.

Not the answer you're looking for? Browse other questions tagged grammaticality verbs past-tense or ask your own question.

16
What is the correct present continuous form of "thunder" and "lightning"?

12
How can I change the tense of a hyphenated verb?
1
Past or present to explain an active state in a past sentence
0
Tricky Past Perfect sentences
3
Using Past-tense or Present-tense for verbs
6
Changing usage of past-perfect constructions in American and British usage
0
Verb tense confusion - how to correctly use past perfect in a past tense narrative