Are there figurative or idiomatic English expressions to mean hindering a person in achieving work / attempt?

When I said “Don’t pull my legs,” in English as a literal translation of Japanese idiom, “足を引っ張る-ashi o hipparu - pull one’s leg” meaning “trip a person up with a mistake” to my English enthusiast friend who pointed out my misspoken words in English Speaking Society, she retorted me that “Pull one’s leg” in English has totally different meaning from Japanese “pull one’s leg.” It means to play a joke on a person.”

I consulted a digital English Japanese dictionary on the spot. She was right.

“足を引っ張る- pull one’s leg” is very popular Japanese idiom that is used when somebody is nitpicking your error or misstatement. And I think it came from an analogy of pulling somebody down who’s trying to climb up the ladder of success by his / her legs.

Are there English idioms or figurative expressions equivalent to Japanese “Ashi o hipparu –pull somebody down by his / her legs from the ladder of success / achieving goal, by exposing or making most of his / her mistakes / fault / shortcomings?

Note: There is also "(someone's) goose is cooked" version. Apparently, it is more common.

spike someone's guns: To frustrate a person's efforts or designs; to undercut, to render helpless.

There are also other similar idioms that you can use depending on the context:

Note: You also mentioned the idiom trip someone up in your question which is partially what you are asking. But it doesn't necessarily indicate that you are hindering someone's success.

[with object] (trip someone up) Detect or expose someone in a mistake or inconsistency:

the man was determined to trip him up on his economics

Note 2: If you want to use a career related phrase, you can consider ruin someone's career.

Also, this Ngram result might give an idea how common these phrases are. (I didn't include "stand in someone's way" because it has other broader senses) 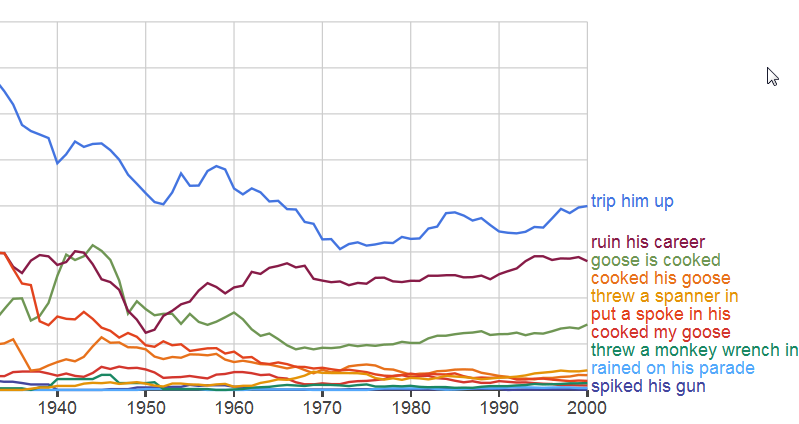 As a lighter hearted version of the Japanese ashi o hipparu, "used when somebody is nitpicking your error or misstatement" may I suggest the flowing idiom bring somebody down a peg or two

This is used in those instances when a braggart or someone too big for their boots needs a reminder that they are not as perfect or talented as they think. It shouldn't involve public humiliation (although I wouldn't exclude it categorically) but it should wound or prick the offender's pride.

The definition that The Phrase Finder gives is

To 'take (or pull, or bring) down a peg (or two)' is to lower someone's high opinion of themselves.

Etymonline dates the phrase as far back as the 1580s

Another related idiom is to knock somebody off his/her pedestal

Cambridge Dictionaries Online
to show people that someone is not as perfect as they seem to be:

Here is a Google Ngram chart illustrating how frequent the following expressions are: cooked his goose, spiked his gun, took him down a peg, bring him down a peg, off his pedestal in the English corpus from 1900 to 2000. Click on the link to see a larger version and visit the results listed at the bottom of the page. Failing that, see the comments below.

To "keep someone back" is to keep them from advancing in life.

Yoichi, your headline seems different from the question

BUT NOTE, in fact it is less-used literally that way:

You most commonly hear "DON'T pull my leg!!" which is equivalent to saying "You must be joking" or "don't be silly".

(issue 2) you give a number of different senses for the JAPANESE saying:

a) “trip a person up with a mistake”

b) "hindering a person in achieving work"

(a) is just an accident. I can't really think of an idiom for that. yo'd just say "whoops, sorry I was clumsy"

(b) is "sabotage". ie you deliberately spoil someone's efforts. the only idiom I can think of there is "spike their guns". that is rather "old-fashioned".

(there is an idiom "don't rain on my parade" which is similar but not exactly that.)

(There's an idiom "albatross..." or "an albatross around your neck" which is fulled explained here -- meaning a psychological burden.)

(A somewhat related idiom or concept is "tall poppy syndrome" - when a group tries to pull-down a high achiever. it's wiki day )

In the end the only really current phrase I can think of, that relates to this is "don't bring me down". (ie, the person being "leg-pulled" would exclaim that to the leg-puller.)

Here's the definitive reference on that from 1979:

So, you might hear "that guy at the office - he is always trying to bring me down."

At this point, I do not know exactly what your Japanese idiom "ashi o hipparu" actually implies. (Later - I notice the clarification in the comments, thanks.)

To interfere with; hinder.

Not the answer you're looking for? Browse other questions tagged idioms phrase-requests or ask your own question.