Is IOU an abbreviation, an acronym, or an initialism?

IOU stands for I owe you and we pronounce each letter separately. But how do we classify that construction"?

It can't be an acronym because we don't pronounce IOU as one word, whereas we do with NATO and RAM.

It can't be an initialism because if it was, it should be written as IOY (I Owe You)

Other examples that spring to mind is CU for see you and YRU for why are you, where initialism would dictate that the proper forms be SY and WAY.

How do linguists define this structure? Is there a more specific term than abbreviation?

It could be characterized as a rebus

a riddle or puzzle made up of letters, pictures, or symbols whose names sound like the parts or syllables of a word or phrase [Merriam-Webster]

While a rebus often contains images, letters being used to represent syllables is common. 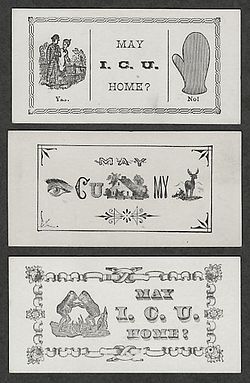 In particular, the Encyclopaedia Britannica states

Literary rebuses use letters, numbers, musical notes, or specially placed words to make sentences. Complex rebuses combine pictures and letters. Rebuses may convey direct meanings, especially to inform or instruct illiterate people; or they may deliberately conceal meanings, to inform only the initiated or to puzzle and amuse.

A familiar English rebus is the debtor’s “IOU,” for “I owe you.”

If you wanted to be more precise in defining it, you could say alphabetic rebus.

I think it is a phonetic abbreviation in the sense that IOU represents the (phonetics) sound of “I Owe You”, not its proper initials, similar to CU for “see you”. (From The American Heritage® Dictionary of the English Language)

A gramogram or grammagram or letteral word is a letter or group of letters which can be pronounced to form one or more words, as in "CU" for "See you". They are a subset of rebuses, and are commonly used as abbreviations.

Initialism: an abbreviation consisting of the first letter or letters of words in a phrase, syllables or components of a word, or a combination of words and syllables and pronounced by spelling out the letters one by one rather than as a solid word. - AHDEL

There is also alphabetism (Farlex Trivia Dictionary): The expression of spoken sounds by an alphabet; the representation of the sounds of speech in consistent graphic form.

Glottopedia defines alphabetisms as follows: an abbreviation that takes the first letter of each word of the base expression (like an acronym), and is pronounced by spelling out each letter.

But MW defines it as the use of letters as symbols; the representation of speech sounds by vowel and consonantal rather than syllabic signs. (IOU seems to fit that bill.)

Mindmap has subctegories of acronyms which are interesting to consider, including bacronym: refers to a word which seems like an acronym, but actually isn't, and states the difference between an acronym and an initialism is that an acronym forms a new word, while an initalism does not; you say "U.K." is an intialism for United Kindom: the periods are a dead-giveaway that's it's an intialism (but it's not an authoritative source).

Not the answer you're looking for? Browse other questions tagged orthography abbreviations acronyms initialisms clipping or ask your own question.

2
What is it called when single letters are used as words in a sentence?
0
"UID" (unique identifier) - half abbreviation, half initialism. What it is?
2
What is the English term for a word meaning a shortened/contracted version of itself?
3
Making acronyms/initialisms from hyphenated words
2
What kind of abbreviations are "Bee Gees", "Eminem", etc?
0
Is there a term for a shorthand word formed by pronunciation?
-2
Is the word "acronym", in fact, clearly defined?

1
How can I tell when an abbreviation is an acronym?
6
Does pronouncing an initialism make it an acronym?
7
Can "sitcom" be considered an "acronym"? A Syllabic Acronym? Or a Hybrid Acronym?
1
A word for an acronym that doesn't stand for anything
6
Articles with initialisms: 'the' or no 'the', can both be correct?
1
The curious case of "UChi" and its pronunciation
3
How to make an initialism out of a word/phrase with a number?