How did 'adumbrate' evolve to mean 'represent in outline'?

What's an intuitive derivation behind ODO's definition 1 that helps to remember its meaning?

1. adumbrate = [with object] Represent in outline:

Etymonline for adumbration: 1530s, from Latin adumbrationem (nominative adumbratio) "a sketch in shadow, sketch, outline," noun of action from past participle stem of adumbrare "to cast a shadow, overshadow, represent (a thing) in outline," from ad- "to" (see ad-) + umbrare "to cast in shadow," from PIE *andho- "blind, dark" (see umbrage).

My confusion arises from opposition between the clarity of an outline and haziness of a shadow. ODO's definitions 2 and 3 seem fitter, because they directly involve the idea of 'shadow'.

Shadows can be (indeed, usually are) crisp:

they are basically "accurate, but 'colourless / line drawings' of an object" 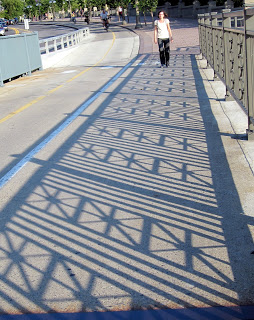 It's funny that the high-tech analogy we'd use today would probably be something like "give me the mesh version!" (like, in a 3D game or movie, just the "mesh", the actual form, of the character, rather than all the rendering, colouring, etc etc.)

Just to get the picture. Forget shadow – think silhouette. That is an outline of the object. So is a shadow, and an eclipse.