“Freedom is slavery” and “Ignorance is strength” - What kind of rhetorical strategy is this?

What kind of rhetorical strategy (or fallacy?) is it when someone uses words with opposite meanings and combines them in what seems to be a contradiction?

In that context they were used chiefly as slogans to back up the totalitarian philosophy.

Orwell's post-1945 writings (Animal Farm and 1984), are powerful allegories on the totalitarianism of the then recent decades. There was general scepticism concerning the possible shape of the political future. His slogans (of which All animals are equal, but some are more equal than others is perhaps the most famous) satirised those of the great dictators, not only the Soviet ones but those of the Third Reich, such as Arbeit macht frei ('work makes you free'.) written above the entrance gates of places like Auschwitz.

This is the Art-Deco, 1930s built Senate House, the administrative HQ of the University of London, in Bloomsbury.

I can never enter the building without sensing the sinister presence of Big Brother. 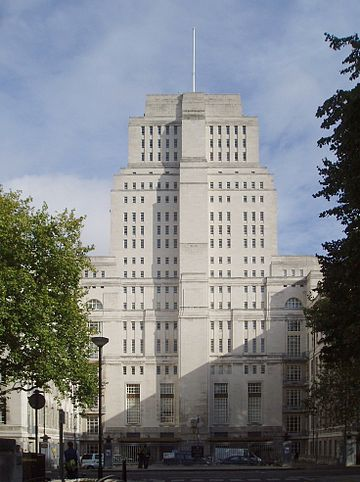 So the name of the rhetorical strategy I would suggest is (and I confess I am no rhetorician) satirical allegory.

It seems to be an example of the big lie technique - a lie so "colossal" that no one would believe that someone "could have the impudence to distort the truth so infamously.". It also edges on the famous quote [mis]attributed to Joseph Goebbels: If you repeat a lie often enough, people will believe it, and you will even come to believe it yourself..

The exaggeration and boldness of these obviously untrue statements highlight how strong the influence of the Party and how complete the lack of any resistance at that point was. Some claims found in North-Korean propaganda of the modern day, e.g. the semi-miraculous stories surrounding the birth and childhood of the country's leaders, are actually not far from Orwell's wildest phantasies.

The closest thing I can think of is the equivocation fallacy, where the meaning of a word or phrase changes as it is used in different places within an argument. But I don't believe the examples you cited are contradictions; they are actually very perceptive. Take "freedom is slavery"; freedom actually is a kind of slavery, in many ways.

One is that the unrestricted "freedoms" we take for granted actually enables exploitation. For example, "free markets" aren't free. Most sectors of the economy are dominated by a small number of corporations, headed by executives that earn hundreds of times as much as their underlings, who they hold captive by the threat of "outsourcing" and poverty. In a similar way, "freedom of speech" isn't free; it allows a small number of media companies to drown out competing discourse and smear dissenting voices as "radical". In general, unrestricted freedom is a tool of repression that allows elites to become vastly more powerful than ordinary people.

Freedom also entraps people in guilt and doubt. As soon as they are free to make decisions, they are responsible for their consequences, and have to agonize over different choices and tradeoffs. When people are free to make choices and don't measure up to what they want to be, or what society expects them to be, they can also be blamed for making those choices.

It would have been possible, for example, to say BIG BROTHER IS UNGOOD. But this statement, which to an orthodox ear merely conveyed a self-evident absurdity, could not have been sustained by reasoned argument, because the necessary words were not available.

I think self-evident absurdity is the term you are looking for.

Not the answer you're looking for? Browse other questions tagged rhetoric figures-of-speech or ask your own question.

0
What is the literary device that describes phrases like “faithfully unfaithful”?
3
What is the name for this type of phrase? 'seriously hilarious'