“Meandered about” or “meandered around”?

Consider a person who slowly wanders through a large room. Would such a person "meander about" or "meander around" the room?

Since it is customary to write "walked around," I am tempted to choose the latter option, but it may convey a sense of literally circling the room instead of moving about within it.

It is worth noting that the verb meander is formed from a noun, meander, from the name of the Meandros River in Asia Minor.

The design known as the Greek Key is called Μαίανδρος (Meandros) in Greek. 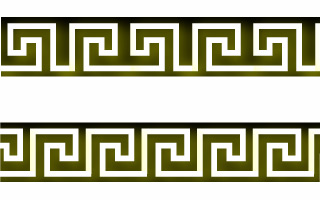 The environmental protection dept of my state says that I should build my house beyond 75 ft from the river. (For a resource critical river the minimum clearance is 200 ft.) It also stipulates that I can maintain a "meandering path" at the river.

The code enforcement officer clarified that meandering means not moving in a straight path, but varying between left and right as one walks along the river. Opposite my house on the river is a little island, too small to have sufficient clearance from the river to build a house. The owner of the island could have a meandering path around that little island along the banks of the river.

Then imagine the school hall and a student meandering around the hall by the edges of the traversable areas of the hall.

Then imagine another student meandering about the hall randomly.

Neither choice is correct. 'Meander' already contains the notion of 'wandering', so 'meander in' is the best choice.

6
The meaning of “Have been around”
4
Does “walk back” have a meaning of ‘deny’ or 'keep distance from somebody / something.' as an idiom?
1
“get one's head around” vs “get one's arms around”
0
What is the meaning: splash about and splash around?
3
Terminology for turning an idiom's meaning around
0
Expression about searches
1
Idiom about forgetting about someone/something