Etymology of a "pegged CPU"

There's a slightly obscure, slang meaning in tech circles of the word "pegged" as it relates to a computer's CPU. When it is fully utilised for a duration (at least several seconds), you can say that "the CPU is pegged".

Does anyone know the history or etymology of this usage of "pegged"?

Many analog gauges such as speedometers have a maximum marking which is technically not as high as you might be able to make the reading actually go. To prevent the indicator needle from going too far beyond that marking and possibly getting bent or otherwise damaged when it hits the casing, a small peg is placed at or slightly beyond the maximum marking. Thus, when you achieve the highest speed the gauge will show, you have "pegged the needle".

(Hitting the peg is not damaging in the way that hitting the casing would be because the peg is placed much closer to the base of the needle than the tip, so there is less torque being exerted, and the torque is usually on a thicker part of the needle.)

Here is an image of a gauge, with the peg circled in green. On this one you don't have to worry about needle damage, since the gauge is circular, but you wouldn't want to have it measuring a pressure of about 100 psi and only showing a reading of about 20 psi because it had wrapped around. 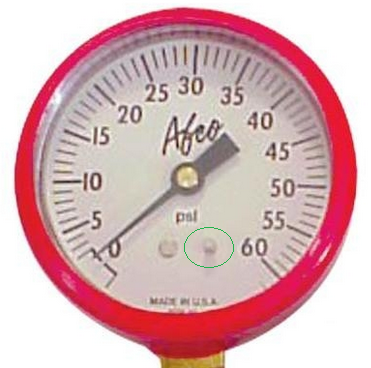 (Unfortunately the only other reference I can find on short notice is Urban Dictionary (sense 6).)

I have seen an actual pegged meter in the EE Lab at the University of Wisconsin. When the meter is hit with a sudden extreme over voltage, the needle hits the peg hard enough that the needle wraps around the peg.

Why is there a peg on the face of the meter? Probably because the meter isn't accurate above the peg point.

There are a few reasons for a Peg to by placed on the face of an analog meter. 1) The devise was designed to measure a certain range accurately. A peg prevents rotation beyond the limit. 2) Some of these devices have a limit to how far the pointer can rotate before it would jam or damage the device. 3) Many analog meters have a spring connected to the pointer under the 'face'. a) Often this spring is designed to bring the pointer back to zero...and a peg may be placed there as well. Stretching the spring would render the device inaccurate. b) In some meters, the springs are calibrated for the device, with precise resistance. To prevent over-tightening (winding) or loosening (unwinding) of the spring, a peg is placed on the the face to stop the pointer from breaking or stretching the spring, which would either break the meter, or make it inaccurate. The point is, if something is 'pegged', it is maxed out, full throttle, needle to the pin, peddle to the metal, or Pegged out!

Peg in the sense of restricted or constrained, 19th C:

Peg in the sense of a fixed price:

Peg in the sense of toiling labouriously for a long period:

All of these show that being stuck on the maximum level has had analogous uses for some time. The first two are by analogy of pegs used to fasten something, while the last is more obscure.

Tachometers and similar dial-based measures are from around the same time, though I don't know when they first had pegs to block overrun, but it certainly has led to people talking of dials being pegged in the twentieth century so it's there as a source too. Since at the time talking about a car or engine being pegged could both be referring to this or also in the earlier senses I give above, chances are it's actually a combination of both that led to it being used. That two different people might understand the word in the same way, albeit by different routes, would only make it more likely to become current.

Hellion's answer is probably right. But my first guess was that the meaning was more along the lines of "the CPU isn't really doing that much useful work, but its usage rate is being arbitrarily reported as" 100% - akin to a pegged exchange rate. (I hear the phrase "pegged at 100%" as "prevented from dropping below 100%" rather than "prevented from exceeding 100%"...)

It would be interesting to have actual evidence either way.

The original meaning of the word peg is a small stake driven to the ground or onto a wall to hold something down, or an item used as mark.

The word is of Dutch and Germanic origin.

peg (n.) mid-15c., from Middle Dutch pegge "peg," a common Low German word (Low German pigge "peg," German Pegel "gauge rod, watermark," Middle Dutch pegel "little knob used as a mark," Dutch peil "gauge, watermark, standard"), of uncertain origin; perhaps from PIE *bak- "staff used as support" (see bacillus). To be a square peg in a round hole "be inappropriate for one's situation" is attested from 1836; to take someone down a peg is from 1580s, but the original literal sense is uncertain (most of the likely candidates are not attested until centuries later). Peg leg "wooden leg" attested from 1765.

Therefore, to ask the question

What is the origin of "peg down your expenditure"

would be akin to asking the difficult to answer question

What is the origin of "driving me crazy".

English is full of idiomatic usage, like any language.

The world of computer science itself has frequently borrowed and adapted such idiomatic usage.

Not the answer you're looking for? Browse other questions tagged etymology terminology slang technical or ask your own question.

3
'never peg the needle on your spending meter'

8
What is the origin of "pan" as a slang term for "face"?
10
Why is a black eye called a "shiner"?
10
origin of "5 seconds flat"
4
Etymology of "scramble" (in the context of military jets)
6
Does "This blows!" (it's bad) derive from "This sucks!"?
23
Etymology of "div"
12
Did the slang term "The Bomb" meaning "Very Cool" come from the American Jazz scene?
28
The Etymology of “husband’s tea”
11
What's the etymology of the military slang word "jippo" meaning gravy?