Why aren’t all grains called “grains”?

In most languages, the word used for a single caryopsis seed is a good equivalent of grain — it is not only the translation for this kind of seeds, but also the translation for other meanings of the word, such as a grain of sand. In English, this is used for grain of rice and other cereals, and even for botanical non-grains like amaranth. But then suddenly, other similar seeds are called by other words whose primary meaning is much less suited than that of grain. The examples I have in my head are kernel of maize and wheat berry.

Why this strange mixing of words? A grain is well aligned with maize and wheat not only in its meaning as a caryopsis seed, but also the other meanings like grain of salt exhibit some similarity, as this is a single very small discrete dry piece of something encountered as a large mass, which has fluid-like dynamics as a whole (you can pour salt, and you can even have phase separation with two different sizes of grains). Many other languages follow this logic.

A kernel as I understand it is something which is at the middle of a thing, somehow giving it definition. If you want a look at it, you have to extract it from its outer layers. Also, there is definitely only one of it, just like a human has many bones, but only one skeleton. This is true to some extent for both “normal” plant kernels (like peach kernels) and the new meaning of an OS kernel. I think that the mathematical meanings of kernel follow this metaphor, like the kernel of a matrix. But maize — which should logically have grains — has kernels, which are unlike all the other objects I have heard being called kernels.

A berry is a word I like, too. While I am aware that botanically, the fruits we call berries belong to different categories of fruit, they have very similar culinary properties. They are always juicy, taste best when raw, combine a sweet and a sour taste, are small, not starchy at all, and make good jams. The color is also mostly somewhere between red and blue. But they don't have a shape in common — compare the classically heart-shaped strawberry, the round blueberry, and the agglomeration called a raspberry. And then we have wheat, which differs from true berries in all points I listed — and somebody calls its grains wheat berries.

Edit: I was probably too mired in descriptions to state the question clearly. While there probably isn’t an all-encompassing reason for all existing cases (but if there is one, I’ll be glad to hear it), I’d like to hear the reasons for the two specific cases I listed, as in kernel of maize and wheat berry. Why was an exception made for exactly these two, and why was the specific word chosen for them?

Interesting question. I have three or so answers; I feel like my answer to kernel of corn is a bit weaker than that of wheat berry, but I guess you can be the judge of that.

The modern appearance of what we Americans know as corn (maize) is deceiving as to its history. As you may or may not know, maize is not a natural plant, and could not survive in the wild by itself -- it was originally domesticated by pre-Columbian Americans over the period of a 1000 or so years from its natural ancestor teosinte. It cannot reproduce in the wild, primarily because it has no good vector of reproduction; plants, being sessile creatures, and being intensely competitive for space, often have to adopt "natural" vectors to transport their seeds from their birthplace far and wide so their progeny have the best chance to survive. Most fruits, sugary and pleasant smelling, have adopted animals as their vector to transport their seeds; teosinte, and other grains of the grass family, adapted to drier, more arid locales, adopted wind as their method of seed dispersal.

Now, the first thing one has to do when domesticating a plant to perform human bidding is to isolate it from its wild brethren, so that they don't transmit their unwanted genes into the domesticate. Or, said another way, the pro-Columbian Americans who domesticated maize had to eliminate the dispersive abilities of teosinte, in order to select for bigger seeds that give maize is nutritive value. That in turn, meant they had to reduce or eliminate the superstructures of the teosinte seed that allowed it to better disperse and survive. I.e., domestication entailed the reduction of the protective seed coat that enveloped the fruit, to offer it less protection from the elements; and the strengthening of the rachis, normally brittle, that attaches the individual fruits attached to the cob. Well, OK, you say -- why does all this matter? The below image will make the point clearer. 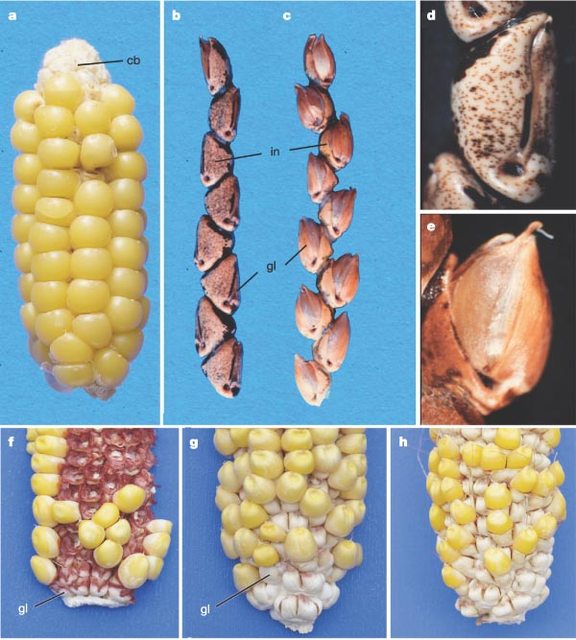 Figure A is "modern" corn. Figure B is completely wild teosinte, and Figure C is teosinte with a maize gene introgressed into it. Figures G and H are maize with various teosinte genes introgressed into them. Do they make the kernel nature of maize clearer?

What I'm trying to show by including the above image is that during the time when western Europeans would have been introduced to maize, maize looked intermediate from what it looks like in Figure A and what it once looked like as wild teosinte in Figure B. Understandbly, the pre-Columbian Americans didn't understand genetics, didn't have modern breeding practices, and didn't have the techniques of The Green Revolution to perfect their staple. Humans have since engineered modern maize to be basically "all seed" and "no protection", but in the time of the pre-Columbian Americans, the seedcoat of fruit would have been much more apparent, and the rachis would have been thicker, like that of figure B's. The kernel nature of maize at the time would have been much more apparent.

Being a member of the grass family, and adapted to arid environments, teosinte (and hence maize) seeds harden quickly once liberated from the stalk so as not give up excess moisture. The first teosinte seeds pre-Columbian Americans experimented with would scarcely have been edible. As a result, some archaeologists and anthropologists think, and have demonstrated in the lab, that the first Americans who set about domesticating teosinte originally popped its seeds to extract their nutritive value. If popcorn, and the inevitable hardened seeds associated with its making, were served to the first Westerners to experience maize, the kernel nature of the staple would also have immediately suggested itself.

Phew! On to your second question.

According to Merriam-Webster's Collegiate Dictionary, p. 1424, a wheat berry is an "unprocessed whole kernel of wheat", and as a term it has been attested since 1848.

At first glance, viewed solely botanically, the name wheat berry is kind of puzzling, for the reasons you mention. But the problem is solved when one realizes that ordinary berries and wheat berries serve the same functional role in two immediately recognizable activities: regular berries dye clothes for the tailor, and wheat berries dye bread for the miller, when ground into flour as middlings. I quote from The Technics of Flour Milling: A Handbook for Millers (1904):

In dealing with wheats it is usually the custom to look at them from a point of view characteristic of some property which the sample under observation is mored noted for. For instance, English varieties are relied upon for colour and flavour more than strength, and in like manner many kinds of Russian samles for strength, without special regard to their qualities which they may or may not possess to any extent....the point to be here noted is this — that the two principal essentials are strength and colour...

In fact, this "berry"-like nature of grains was noted long before wheat berry came into its own. From The Encyclopedia Britannica, Volume 12:

The word "grains" was early used, also in French, of the small seed-like insects supposedly formerly to be of the berries of trees, from which a scarlet dye was extracted (see COCHINEAL and KERMES). From the Fr. en graine, literally in dye, comes the French verb engrainer, Eng. "engrain" or "ingrain", meaning to dye any fast colour.

In other words, the "berry"-like nature of some grains is where we get our verb ingrain -- meaning to impart some essential quality internally, like which does dye -- from! So in fact the name makes perfect sense.

The concise answer is “historical accident”, which is generally how languages develop, not rationally. Researching the etymology and historical usage of some of these words might bring to light the specifics of those accidents.

The word corn for example was once used for all grains (or at least other grains like wheat, rye, and oats). It was also used much like the word grain for other things (like your grain of sand usage), like salt (a trace of this usage remains in corned-beef, named for the corns of salt used) and also peppercorns.

I’d be willing to bet that Uticensis’s answer about corn is post-facto rationalization and not really how the usage occurred. Note that kernel is derived from the same root as corn, and like corn has at times been just another synonym for grain.

I would speculate that wheat “berry” was a bit of 19th-century marketing to sell people on eating whole grains (which was promoted by health movements of the time).

The answer to this lies in the category of "counting nouns." English, like many other languages, has specific rules governing associated nouns for enumerating objects. For example:

Whether based on shape or container, convention rules the standard counting noun. In the case of grain, objects that are roughly in the shape and size of units of sand up to units of rice are described as "grains" (rice, wheat, barley) and larger amalgamate and containing seeds are "kernels," and so forth.

Generally, these must be learned on a case-by-case basis although with experience you can usually make an educated guess.

Not the answer you're looking for? Browse other questions tagged etymology expressions terminology plant-physiology or ask your own question.

6
Origin of "Take this question with a grain of salt"?
9
Is there an expression for creating something from start to finish (e.g. grain to bread)
1
"Bury vs. Berry" The Proper Pronunciation Edition
5
Why is ginger ale called an "ale"?
2
Why are 'quarts' called 'quarts'?