What is a good translation of “crâne de piaf” as a nickname?

I'm looking for a translation of "Crâne de piaf", in English, in the context of a nickname given to some fictional character.

Also, take note that I am native from France. What I'm looking for, precisely, is an english nickname equivalent of "crâne de piaf".

A little more context is probably welcome: the character I'm thinking about was a very highly intelligent guy, an inventor, a physician, etc. But, at some point he progressively lose his humanity, by becoming something close to an undead. His intelligence is progressively reduced to that of a typical undead in fantasy books/stories.

One day, as he progressively becomes undead, his skull becoming more apparent (but not completely), he visits a little girl he used to know before the beginning of his transformation. And she do not recognize her. Instead, she calls him "crâne de piaf".

Much later, he will become a threat for all living being in the region and take this name - because he do not recall his real name.

What would be a good english equivalent for this name ?

The only "not intelligent" + "skull" that I can think of is numbskull:

a dull-witted or stupid person; dolt. Since 1710-20, originally spelled numskull.

The word numbskull or numskull was derived from the Middle English words nome + scolle. The first recorded usage of the term was in the early 18th century. The actual origin of the word is unknown. Numskull or numbskull is defined as a dim-witted person, imbecile, dolt or moron. The archaic definition is a reference to the actual physical head of a person that is lacking intelligence.

here in John Arbuthnot’s satirical pamphlet of 1712, The Law is a Bottomless Pit: “Have you no more manners than to rail at Hocus, that has saved that clod-pated, numskull’d ninnyhammer of yours from ruin, and all his family?”

Birdbrain of course. (which is both related to sparrow and skull)

Slang A person regarded as silly or stupid.

A depiction of "crâne de piaf": 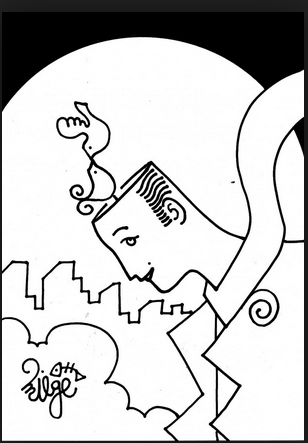 Pinhead. But this can also refer to someone with microcephaly.

Both "Crâne de piaf" and "pinhead" make use of the idea (whether necessarily true or not) that a small head implies little intelligence.

Whilst numbskull would have been my chosen answer had not @medica got there first, another possibility is scatterbrain. It has a rather different meaning to numbskull. whilst the first means dim-witted, scatterbrain suggests someone disorganised and lacking in concentration.

A dickhead on the other hand is 'a stupid, irritating, or ridiculous man'

Not the answer you're looking for? Browse other questions tagged translation french nicknames or ask your own question.