Word for "the entire back part of the body"?

How do we refer to the entire "back part" of the body?

In biology and medicine, the words that describe the sides of a body are posterior, anterior, dorsal and ventral [image source]:

So, technically, the back side of a human would be called the dorsal side. However, in humans, because posterior also means "back", you can also refer to the posterior side to mean back side: 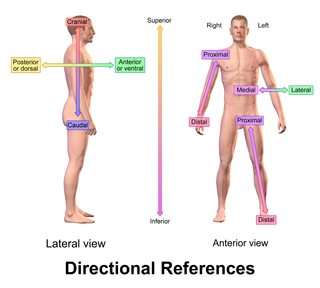 As explained in wikipedia:

In human anatomical usage, anterior refers to the "front" of the individual, and is synonymous with ventral, other than in the head. Similarly, posterior, refers to the "back" of the subject, and is synonymous with dorsal, other than in the head (see Table 3). When referring to the body as a whole the terms "dorsal" and "ventral" are used infrequently in human anatomy. However, they are applied commonly in referring to limb position.

This is because the primate anus is actually on the dorsal side but this is not something that applies to all species. In fact, I can't think of any non-primates with a dorsal anus.

So, in general anatomy, to refer to the back side, you would use dorsal but for humans you can use posterior. Note that the word posterior by itself is a polite way to refer to the buttocks (from dictionary.com):

the hinder parts or rump of the body; buttocks

Therefore, if you want to use posterior to refer to the entire rear side of a human body, qualify it by writing something like the posterior side and not simply the posterior.

Another option which can be used in normal conversation/writing is rear (from the online Merriam-Webster):

1 : the back part of something: as

b : the part of something located opposite its front

Note that, again, I hurt my rear will be understood to mean I hurt my buttocks so you should qualify it:

The rear side of the body.

The rear of the body.

anterior
2. Located on or near the front of the body in higher animals.

posterior
2. Relating to the caudal end of the body in quadrupeds or the dorsal side in humans and other primates.

The other words are ventral (the belly side) and dorsal (the spine side).

[Citations from The Free Dictionary Online]

Backside. To avoid confusion one might say their entire backside, as almost every word that denotes the 'rear' of something has been turned into a slang term for the buttocks. Even Merriam-Webster's formal definition includes posterior as: (n) the part of the body above the legs that is used for sitting; the hinder parts of the body; specifically: buttocks.

Photo: lol his backside pedaling us around (tripadvisor.com)

: the back of something, (informal) the buttocks -collinsdictionary.com

1
What is the opposite of frontal?
4
Technical Names for Body Halves – Upper and Lower

6
Word to describe putting a body part in a place thus not allowing fresh air in...?
1
Word and etymology for "small of one's back"
3
What is a word for using an attribute of a thing to refer to the whole thing?
5
Is there a term that covers body parts, tools, entities and more?
10
What's that robber's thing called?
2
One elegant word for "body-part-specific" exercises?
2
What's the word for horse-headed human? (Opposite of a centaur)
1
Word to describe the movement of a galloping horse's head
2
Area of the body between legs and genitals?