How did 7 come to be an abbreviation for 'and' in Old English?

According to A History of the English Language: Revised Edition by Elly van Gelderen, p.53, in Old English the numeral 7 was used as an abbreviation for the word and:

Abbreviations are frequently used, e.g. 7 stands for and …

The same book includes various Old English passages with examples of these 7's. The Peterborough version of the Anglo-Saxon Chronicle is reproduced on pages 83-84 alongside a Modern English translation, which the author has helpfully uploaded to their website:

The author includes an image of this text on p.84, to which I've added some crudely drawn red arrows showing the locations of the putative 7's: 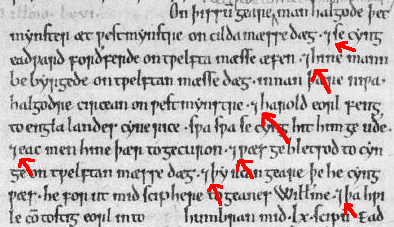 In the Modern English translation given by the author (by Benjamin Thorpe?), the 7's seem to correspond to and:

I'm curious about these 7's! I don't see any obvious relationship between the numeral 7 (or the word seofon) and the word and, and the book unfortunately doesn't elaborate.

Do we know how this convention came about? If so, how? Was it really the numeral 7 or just a similar-looking symbol?

The Tironian et and the modern ampersand had different origins, with the Tironian et having been invented as one of ~13,000 symbols/shorthand by Cicero's scribe, Tiro. It persisted until it succumbed to a linguistic witch hunt during the middle ages, when suspicion was cast upon it for appearing to be a rune or secret cipher. (This detail has been rightly contested, as the Tyronian et does appear in printed books.)

The "et -> &" (ampersand) had no such shady character associations and continues to today. In fact, it allowed for some ornamental experimentation on the part of scribes and typemakers.

The Tironian et died everywhere except for in Ireland, where it still lives in the wild.

(Also in Unicode: "⁊", though some OSes or browsers may not display it.)

It is not used as a period, but as and, which is often how sentences were related them to a previous sentence in early narrative. You can see the periods (or "points")ending your sentences before the and. There was, however, a dearth of punctuation in many manuscripts. Notable exceptions were apostrophes, "C" for chapter, and "¶" used to mark paragraph divisions.

Modern punctuation, designed to clarify syntactic structures rather than to indicate breathings, is largely a Renaissance invention, developing during the first generations of the printing press, and codified in the eighteenth century (about the same time that capitalization and spelling became fixed in more or less their current form). Among the earliest works showing "modern" punctuation is Francis Bacon's Essays. An interesting early discussion of the nature of modern punctuation can be found in Ben Jonson's English Grammar (composed ca. 1617, printed posthumously in 1640). Eighteenth- and nineteenth-century punctuation practice varies considerably, but tends to be "heavy"; current "light" punctuation is largely the invention of H. G. and F. G. Fowler, The King's English. - Manuscript Studies, Medieval and Early Modern IV.vii. Paleography: Punctuation

In your example, there are end points (though not at baseline).

Even though it looks like a seven, it's actually a shorthand character called a "Tironian et"

Tironian nota for "et" (this frequently looks like a small number "7" or, later, a "z" or a "z" inside a circle; cf. the ampersand: &): Tiro was a member of Cicero's household who developed one of the first shorthand alphabets (called "Tironian notes"; the system involved about 13,000 separate symbols)...

The Arabic/Indian numerals are most unlikely to have been known in England in the 12th century, so you can rule out the derivation of this symbol from the number 7. By the way, the Peterborough Chronicle is not in Old English, but Early Middle English.

35
What is the origin of the exclamation mark?
19
Did the Tironian "et" ("⁊") have any impact on the ampersand being shift + 7 on English keyboards?
-2
& What is the story behind the Ampersand?