"I've gotten better-looking as I get older" When did "gotten" re-enter the BrEng vernacular?

This summer I went to Ireland, to be more precise Dublin. Overall good weather and good fun. Anyway, while I was staying in Dublin I'd buy the local newspaper and one tabloid headline caught my eye. 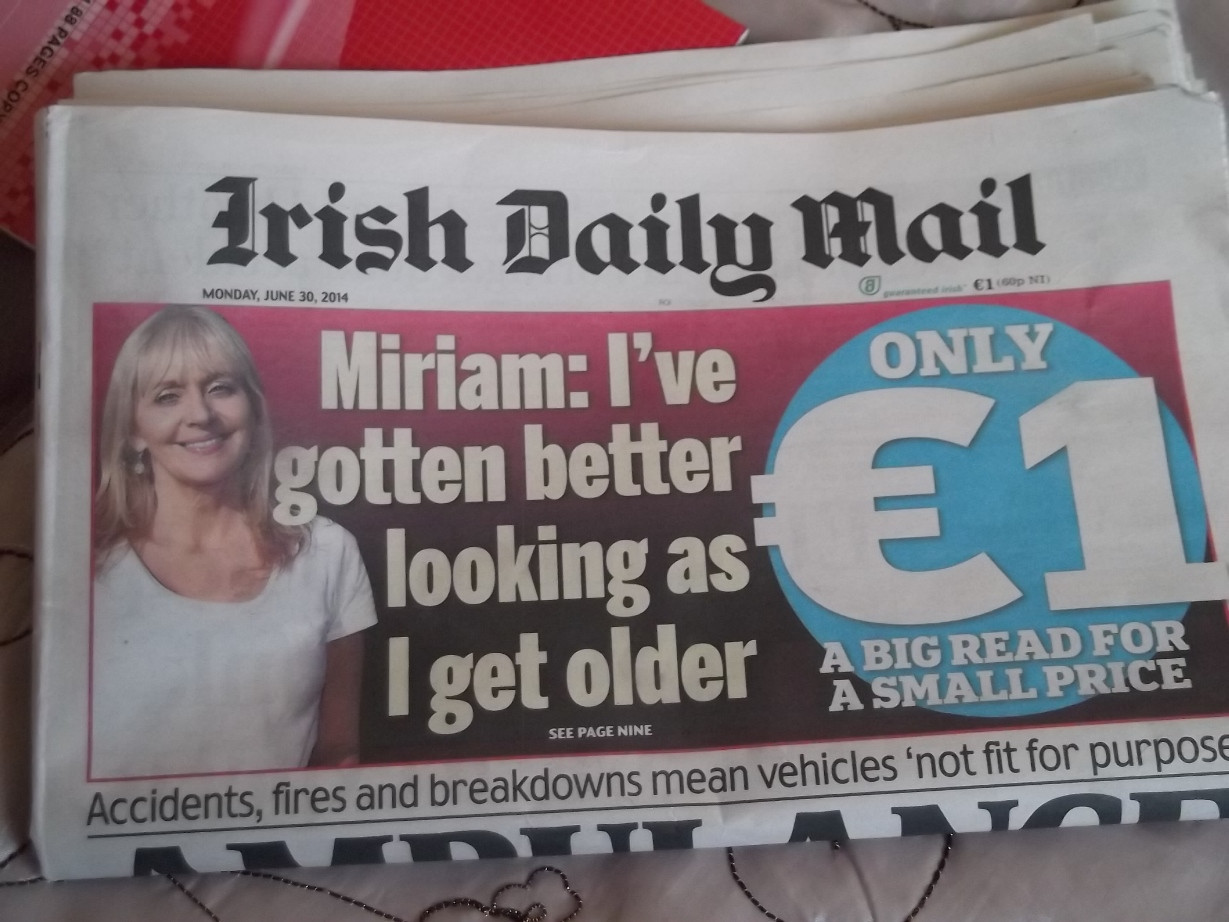 Now I've thought long and hard before posting this question because I don't want to know or hear that sentence is correct if it's spoken by a native speaker. Tell me it's dialectal, tell me it's peculiar to Irish (Is Miriam an Irish speaker? I don't know any more because I've thrown out the rag), tell me that it's American English "slang" which has caught on in the UK and in Ireland. But more than anything else, please tell me if that statement is grammatical.

If it had been me, I would have said:

or at a stretch

I'm better-looking as I get older

I prefer the hyphen in better-looking, am I mistaken? Is this punctuation symbol superfluous? Isn't gotten AmEng? In BrEng the conjugation of the verb get is get, got, got but wiktionary tells me that gotten is archaic British English. I can't pinpoint why that headline bothers me so much, but it does. Can someone explain if this sentence is grammatical/ungrammatical and why?

Some users have commented the dissonance of different tenses used in the statement. The present perfect I've gotten, with the present simple I get older.

Perhaps the present perfect continuous I've been getting older would be more appropriate because it expresses an action that began in the past but is still in progress. Whereas the present perfect I've gotten better-looking might be "perfect" for describing an action that began in the past whose results are felt in the present. All of which leads me to conclude that the following sentence is more grammatically acceptable

I've got better-looking as I've been getting older.

On EL&U today I saw this question pop up: Differences between "I have got" and "I have gotten" The highest voted answer says

In general, "have got" is the present perfect form of "to get" in UK English, while "have gotten" is the US English version.

Gotten is probably the most distinctive of all the AmE/BrE grammatical differences, but British people who try to use it often get it wrong.

It is not simply an alternative for have got. Gotten is used in such contexts as

It appears to me the headline in The Irish Daily Mail clearly conflicts with both these claims.

EDIT THREE
As correctly pointed out in @fdb's answer "I do not know why you think that Ireland is part of Britain." I made a serious mistake in my second edit and title, Ireland has been a republic since 1922. The six Northern counties in the north east of Ireland who chose to remain in the United Kingdom of Great Britain and Northern Ireland are British.

But because I am no longer resident in the United Kingdom, I was surprised by the Irish headline. As a child I don't think I ever said gotten but I was conscious of it being American and to me it was "slang". If gotten is currently used in Ireland, an island which is only 496 Km from England, and American English is omnipresent, it seems likely that "gotten" should be part of the BrEng vernacular. If that is the case...

When did "gotten" re-enter the BrEng vernacular?

There are several possible problems, but most of them are matters of style rather than grammar.

Get rather than become could be considered unimaginative or ugly, but I suspect those who think it so are haunted by the ghost of an English teacher inculcating rules rather than commonsense: personally I get older every day, and would never say become older.

As I get older cannot be justified in that position - grammatically. The sub-editor who composed the strapline may have been in a hurry, or it may be a deliberate mistake. Do not forget that headlines are not, in most cases, required to do anything other than grab your attention -if the journalist knew that his error had caused a discussion like this (and possibly somebody taking the trouble to try and find the original story), he would consider it a job well done.

Better-looking would normally be hyphenated, but again that is subject to journalistic requirements; space is at a premium in headlines, and the omission does no harm.

Gotten for got is the interesting part. Gotten is certainly archaic, and several dictionaries call it "especially U.S."; but it's not wrong. The best reason why it is used here is the rhythm; the three trochees of gotten better-looking sound better and are more memorable than I get or I've got, and certainly better than the dreadful (but grammatically correct) I have got. Whether that was a deliberate decision by the writer I know not. If Miriam is an actor, it may well be a verbatim quote; nobody knows better the value of memorable wording.

This post on the difference between the grammar of got and gotten in American English dates
from about 1995 or so. It's one of the most popular things on my website; it gets 8 kilohits a month.

In relation to your question:

Is Miriam an Irish speaker?

The Miriam in question is Miriam O'Callaghan, a current affairs and chat show presenter on TV and radio. She may be able to speak Irish but she doesn't speak it on on TV or radio and she is definitely not a native Irish speaker.

please tell me if that statement is grammatical.

This has been more than adequately covered in previous answers, and you've alluded to these answers in your edits to the question, but if I may just offer an additional observation (you did ask for personal opinions), I think the two parts of the sentence should agree, either:

I've got better-looking as I've got older

As an Irish person living in Ireland, in my experience usage of gotten is pretty common here. It would not be unusual to hear a person say something like "I've gotten..."

In relation to the specific example from the Daily Mail, I agree with @TimLymington's answer. The most likely explanation for this usage is that the sub-editor was in a hurry or stuck for space.

If Miriam O'Callaghan had only had the presence of mind to be quoted as saying "I've grown better-looking with age", a tremendous number of electrons would not have had to suffer a futile and inglorious death.

As of 2003, gotten was not approved for general British literary use by the Oxford University Press. Here is the relevant entry in The Oxford Dictionary for Writers and Editors, a book that constitutes roughly half of The Oxford Style Manual (2003):

gotten past part. of get; use got except in the common expression 'ill-gotten gain', and in US

I should note that in the United States, the plural form "ill-gotten gains" is somewhat more common than the singular form—though the same may also be true in the UK.

In U.S. English, of course, we say "The cotton's gotten rotten" without batting an eye.

As for "better looking," it doesn't take a hyphen in normal U.S. English publishing style nor (I believe) in normal British English publishing style when it follows the verb. You'd have to recast the headline as "Better-Looking Miriam Boasts of Age-Related Pulchritude" or something like that to justify a hyphen under the guidelines laid down by most major style guides.

Update: With regard to got vs. gotten, this answer is limited to citing Oxford University Press's style preference as of 2003. I don't know what, if any, influence OUP's recommendations have in the Republic of Ireland, and I don't have access to any home-grown Irish English style guides for further consultation. The original question asked whether gotten was now acceptable in British English usage; hence the focus of my answer. If it seems irrelevant now, I will happily delete it; it was never more than a minor observation anyway.

Gotten was in use since America was colonized by the English and well before that in fact. The term fell out of use for the British over the centuries while the colonies continued to use it. So, while gotten is no longer common in BrEng, it's still perfectly valid as it's of British origin.

From the third part of King Henry VI by Shakespeare:

Oxford, how haps it, in this smooth discourse,

You told not how Henry the Sixth hath lost

All that which Henry Fifth had gotten?

Methinks these peers of France should smile at that.

But for the rest, you tell a pedigree

Of threescore and two years; a silly time

To make prescription for a kingdom's worth.

I do not know why you think that Ireland is part of Britain. The Irish Daily Mail does not reflect British English. The answer to your "when..." question is: "Never". As to your other comments: compound adjectives like "better looking" are written with a hyphen if they are used as attributes, but without if they are used as predicates. So in this case "better-looking" would be wrong.

Not the answer you're looking for? Browse other questions tagged etymology grammaticality perfect-aspect transatlantic-differences got-gotten or ask your own question.

63
Difference between "I have got" and "I have gotten"
2
Is 'gotten' a proper/legitimate word?
2
The North American use of "gotten" in the Passive Perfect Tenses

3
Perfect vs Perfect Continuous
7
Just as there are a few nicknames for the U.S. ("Uncle Sam", "Columbia", "Yankee Land"), are there nicknames for England, or the U.K. for that matter?
2
Is "have/has got" a perfect for BrE, but not AmE?
7
Where did we get the "fours" in "on all fours"?
2
How to distinguish and use the present perfect for the recent past?