What is the name of the symbol used to depict 'eat and drink'?

This is the symbol I am talking about, usually used in Google Maps

Those are generally called icons, or just symbols— as in "international symbol" or sometimes ISO symbols

(Note that, in fact, Google do not, I think, use ISO symbols; they have a building or two full of skilled illustrators to draw their own, superior, "symbols" or "icons".)

In most cases there's no particular name for any one symbol. For example, there are different symbols representing different types of hazards. See Wikipedia's Hazard symbol

For what it's worth, the Unicode value is: 1F374 or 1F37D
and is referred to as simply Fork and Knife. 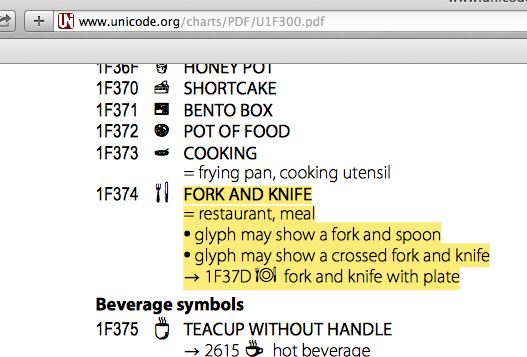 Regarding the difference between icon and symbol. The term icon is very much used with apps on Samsung and Apple telephones, and is very often used in describing "button-like-things" on flat-screen software generally. So I'd be inclined to use the word symbol.

5
What is the name of this system of proof correction marks?
6
Can a person's name be used to represent a group of people?
4
What are different kinds of shops based on the size, structure and location?
5
What does "Can it!" mean, as used by Alex Chadwick?
0
"to help other people to choose" vs. "to help other people choose" - is the former correct?
2
A word meaning something familiar but which you can't put the right name to?
1
Is ride-hailing the same as hail and ride?
3
What is the term for a symbol wherein a part of a whole represents the whole?
0
Living in a neighborhood between a suburb and "the woods"