Word for someone that doesn't like to pause while talking

I come across this quite a bit and it manifests itself in different ways.

The situation I encounter the most is from people who don't seem to want to be interrupted, they need to finish getting their train of thought out at all costs before you butt in. Normally these people will fill gaps while they think with very long a loud varying versions of "Errrr", "Ermmmmmm", "Ahhh"... or repeat the next word they think they are going to say until their brain catches up.

I find it very hard to speak to these kinds of people in normal chit-chat situations, because they can sometimes talk for very long periods and cover a million and one things. I find my self having to memorise my replies as they waffle...

So, back to my question, is there a word this or this kind of person? Also although not really what this site is for, any tips on dealing with them :-)

Someone who simply blathers on and on without letting anyone else get a word in edgewise is said to "monopolize the conversation".

I believe the word you're looking for is "motormouth". According to the Cambridge online dictionary:

a person who talks quickly and continuously, often without considering what they are saying

Similarly, the entry for Motormouth on TVTropes provides the following definition and accompanying image:

A character who speaks if not constantly then often so quickly that it's hard to make out individual words and with the appearance of not having to stop for breath which sometimes makes it sound as though the audio track has been set to Fast Forward... 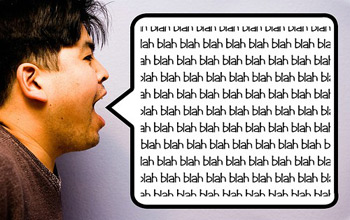 From personal experience: when I was growing up in the 80s US, the best-known motormouth was the guy who sold "micromachines" (very small model cars). I just looked him up on Wikipedia, and his name is, indeed, "Motormouth" John Moschitta.

As for "how to deal with them"? You should thank us for the high-bandwidth connection :)

You may also want to think about:

From urbandictionary.com: A rude person that interrupts people and speaks over them if they don't concede to being interrupted. They generally have a disregard for anything others are talking about. They are known to be loud, obnoxious, and generally inconsiderate of normal social-speaking etiquette.

Also, they will often increase their volume in order to ensure others can't interrupt.

Another option is garrulous:

Given to excessive and often trivial or rambling talk; tiresomely talkative.The Free Dictionary

Not the answer you're looking for? Browse other questions tagged single-word-requests phrase-requests pejorative-language or ask your own question.

8
What is a communication breakdown caused by two cultures/societies trying to adapt one another's mores called?
16
Expression for someone who doesn't like to eat
10
Word identification - unfriendly smile while talking
4
Word for "someone who doesn't want you to succeed"
1
Word or phrase for someone who annoys you as soon as they walk in and start talking
1
Expression/word for talking about a seemingly different subject for a while?
46
Is there a similar English phrase for this Tamil proverb - "Lavish outside home yet starving inside of it"?