Adjectives are the prototypical modifiers of Noun Phrases. Generally speaking we kind of need a specific reason to use a Noun to modify another Noun when an adjective is available. There are many such reasons, but a common one is when there is simply no adjectival alternative - in other words when it simply doesn't exist. Because there is no reason not to use the adjective Chinese when modifying nouns, we do! We should note that by and large there's no difference between modifying the Noun citizen or any other Noun used in formal English:

When the name of the country is a Noun which has no readily accepted Adjective as a counterpart, then, as Jlovegren says, we use that Noun as a Modifier in the Noun Phrase when we need to modify another Noun:

When it comes to countries whose names are already compounds, then it depends on the head word in the Noun Phrase that constitutes the name. If that head word has no Adjective counterpart we will use the name as a Noun modifier. In the United Arab Emirates for example, Emirates is the head Noun in the Noun Phrase. We have no Adjective for Emirates (Emiratian or anything like that), so we have to use the whole name as a Noun modifier. The same goes for the United States. There is no Adjective for States. So we have:

This can be contrasted with, for example South Korea. Korea is the head of the Noun Phrase here. We have an adjective relating to Korea, namely Korean, so the following is perfectly fine:

Similarly we have an adjective corresponding to Britain in Great Britain, so we can talk, for example, of:

This won't work of course if the head noun is just a generic word like Republic. In fact it won't work if there is any phrasal genitive, X of Y construction such as we often find with Republic. Consider:

Instead, when such compounds are used we find:

Very often we have more than one name for a country. Often one is longer and more formal than the other. If there is an adjective for the shorter name we will use that as a modifier accordingly:

However if we use the compound name, then as described above it will depend on the head Noun in the Noun Phrase. So in instances where the head Noun has no adjectival counterpart we will find examples such as:

Similarly, countries primarily known by their abbreviations will also have the abbreviations used as modifiers in Noun Phrases, because there are no adjectives (or at least well-known ones) relating to the names of letters! So we have the British government, but also:

This goes for abbreviations in general, so we commonly find phrases like:

Why can't you say China citizen?

By analogy with U.S. citizen, you think you can say China citizen, but Chinese citizen blocks it. U.S. citizen is different either because it predates American citizen or it means something different. e.g., it's shorthand for the legal term "citizen of the United States" (see below).

Also, United States doesn't have a corresponding preposed adjectival demonym, but China does. My hypothesis is that countries where there is no such form, or you don't know it, you treat like "US citizen": Vanuatu citizen, UAE citizen, Papua New Guinea citizen. English speakers, do these sound better than "China citizen"?

If you know the preoposed adjectival form, then it blocks the N-N compound: Czech, Russian, Soviet, etc.

Why can "U.S." act to modify a following noun?

But English can productively form N-N compounds, so when someone says "U.S. citizen", a native speaker can make a good guess about what it means, even if he/she hasn't heard it before. E.g., a freshly-coined, highly embedded series of N-N compounds such as dog food factory management regulations will be understood by most English speakers.

I think this is shorthand for "Citizen of the United States" invented by U.S. lawmakers. The 14th amendment to the U.S. constitution refers to "Citizens of the United States". The U.S. Code (1918 U.S. Compiled Statutes) gives the following definition for U.S. Citizens as of 1918:

The phrase "citizen of the United States" is used throughout the title on citizenship. e.g.,

Whenever any of the chiefs, warriors, or heads of families of the tribes mentioned in section twenty three hundred and ten, having filed with the clerk of the district court of the United States a declaration of his intention to become a citizen of the United States, and to dissolve all relations with any Indian tribe, two years previous thereto... (25 USC 3950)

This phrase still appears in the modern-day editions of the U.S. Code: i.e.,

The following shall be nationals and citizens of the United States at birth... (8 USC 1401)

But the wording "United States Citizen" can also be found in modern editions:

...and has in writing irrevocably released the child for emigration and adoption; who has been adopted abroad by a United States citizen and spouse jointly... 8 USC 1101 (2000 ed.)

as well as earlier versions:

That it shall be the duty of immigration officials to record the following information...Name, age, and sex; ... whether able to read or write; nationality; country of birth; country of which citizen or subject; race; last permanent residence in the United States; intended future permanent residence; and time and port of last arrival in the United States; and if a United States citizen, whether native born or naturalized. (32 Barnes' Federal Code 3711 ; 1919)

Interestingly, the same passage of the 1919 version of the code (sec. 3664) uses the phrase "Chinese subject" rather than Chinese citizen:

What about "American Citizen"? This word made its way into Title 25 due to a law passed March 2, 1907 (34 Stat. 1229), which uses both terms with no apparent distinction in meaning: 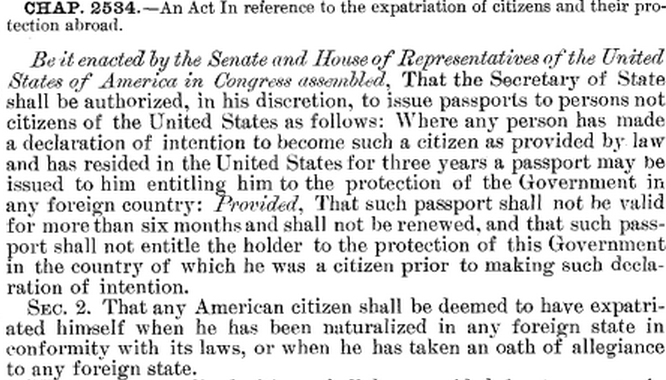 This is very good question. We do in fact say “a United States citizen”, “a UK national”, “the PRC government”, but we do not say *an America citizen, *a Britain national, *the China government. There seems to be an unwritten law that says you can form compounds from multi-word country names (or from abbreviations of the same), but not from single-word country names.

We can't say "China citizen", not simply because we already have "Chinese citizen", or simply because "China" is not a multi-word country name (or the abbreviation thereof). In order to better understand the real reason for this, let's take a look at these examples:

Therefore, it can be inferred that the word "U.S." or "United States" in (1) is somehow deprived of the definite article, i.e., its definiteness, to be able to function as a modifier of "citizen". In other words, there might be some unwritten rule--or a rule I don't know of--that a noun or a noun phrase must not be definite in order to act as a modifier of another noun.

Unlike "U.S." or "United States", on the other hand, the word "China" is a proper noun and thus inherently carries definiteness. So a proper noun such as "China" cannot act as a modifier of "citizen" as shown in ungrammatical (2).

The same obtains with other proper nouns as in:

*He is an America citizen.

*He is a Korea citizen.

*He is a Japan citizen.

The name of the country is the United States of America. So the adjective would be American. But American is ambiguous as it can refer to the whole double continent and an American may be from South, Central or North America. That's why one uses U.S. as a substitute to avoid ambiguity. This problem concerns mainly the USA.

We do say "Chinese citizen". So this is really a question about why "United States" can be used as an adjective.

Not the answer you're looking for? Browse other questions tagged grammar adjectives attributive-nouns ethnonyms or ask your own question.

20
Why do we say “Japan earthquake” and not “Japanese earthquake”?
6
Is it common to use the borrowed noun-adjective form for borrowed French phrases?
21
Americans can eat Chinese, but Chinese can't eat Americans?
3
Grammar questions regarding an excerpt from The Giver
0
‘Responsible’ as a noun
1
Can one get away with using the root "surl" from the adjective "surly" in a sentence?
3
That secondary adjectival form for two-nation matters
3
What "of" should I replace with Saxon genitives? Avoiding too many "of"
1
Is “U.S.” in “U.S.-China trade” a noun or adjective?