What is the meaning of "sticks" as a measurement unit?

I have stumbled upon this sign at the Heraklion airport, Crete, Greece: 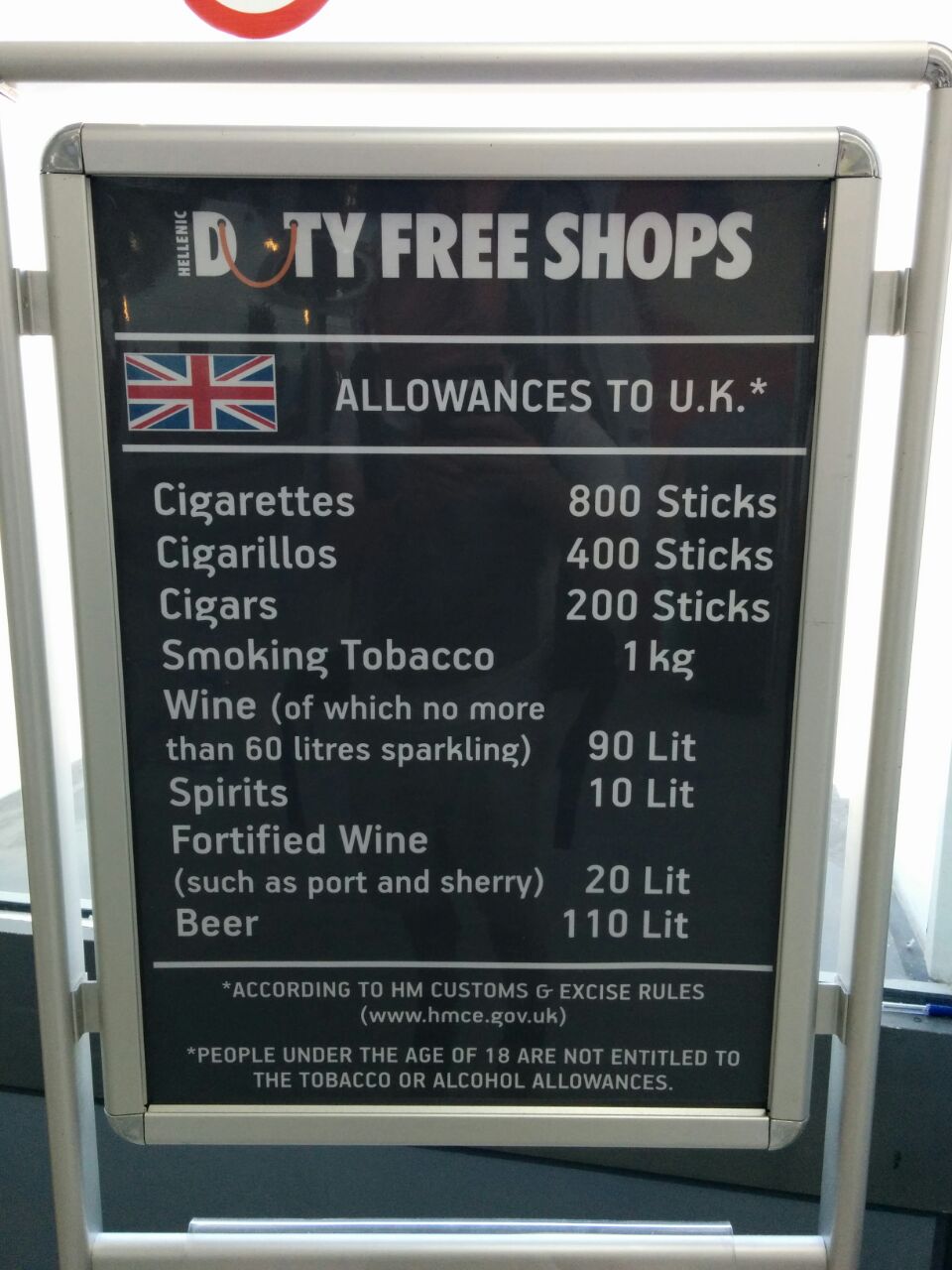 I am a little confused about the meaning of "sticks". Is it a metaphor for one stick-shaped unit like a cigar or cigarette, or is it a weight or volume unit?

Yes, sticks refers to the stick-shaped objects and is used as a hypernym for cigarette, cigarillo and cigar for clarity.

As a unit of measurement it is a bit imprecise, as not all cigars (and even cigarettes) contain the same amount of tobacco. However, it has the advantage of being very easy to implement and to use. Especially in the context of customs and excise duties, this kind of imprecise but easy-to-use measurement is very useful, as you do not need a scale (or worse, lab analysis) to check if someone is carrying too much tobacco or alcohol.

The use of sticks like this I have usually seen in this context. It makes a table like on your picture easier to read, but in plain text I have seen the rules explained more clearly:

The fact that you are (probably) not allowed 800 cigarettes and 200 cigars is not clear from the picture, but my guess is that the rule is still the same... when coming form outside Europe. Inside the EU these restriction are now no more than guidelines, of course, rendering the and/or distinction academic.

As for the choice of the word stick, although the stick-shape of a cigarette is obviously the basis for that, I have heard it used in several countries (at least Greece and India) to refer to individual tobacco-items as opposed to the pack measure. In these (and many other) countries, cigarettes are not only sold by the pack, but often individually. In the Netherlands, “two BrandX” will get you 38 cigarettes, but in India I found it necessary to specify whether I wanted 2 packs or 2 sticks. The hypernym is very handy in places where there is not much semantic distinction between cigars, cigarettes and possibly other tobacco products.

As for references of the word stick being used for cigarettes, there is of course the meaning of marijuana cigarette or the pejorative cancer stick.

It seems the simple meaning of cigarette, although I have seen it at (some) airports, is not common, except in Indian English, where a quick search reveals many examples of the use:

This Budget is likely to make tobacco products even more costlier with health ministry proposing hike in tax on cigarettes by Rs 3.5 per stick. (from Times of India)
If the Health Ministry has its way, you will soon be paying Rs.3 more/per stick of your favourite brand of cigarette. (from The Hindu)

Note that in Indian press, bidis are mentioned alongside cigarettes, and they are also counted in sticks.

PubMed also has an instance of stick as cigarette:

Tobacco contents and length of single stick of different brands of cigarette and bidi were also measured.

I guess in general referencing to a cigarette as a stick simply falls under definition 5 as Merriam-Webster gives it:

something prepared (as by cutting, molding, or rolling) in a relatively long and slender often cylindrical form

I think they refer to single units of product. (800 cigarettes, 200 cigars)

"Is it a metaphor for one stick-shaped unit like a cigar or cigarette?"

It's a curiosity that, as far as I know, there is no superset word for "cigarette or cigar" in English.

If you really wanted to replace "sticks" with a single word (for some reason), probably "pieces". If you wanted to extremely anally distinguish between cigarettes and packets of cigarettes, you'd say "Cigarettes: 800 individual cigarettes" and so on.

Footnote! thanks to oerkelens, we have the remarkable fact that apparently this is the more-normal term in India.

Again just TBC if a person from (let's say) Britain or the USA, who speaks and only speaks English, was passing that sign, in Greece, and looking at it: the person would simply find it to be an incorrect word usage (perhaps humorous). It's a "poor-machine-translation-moment".

Not the answer you're looking for? Browse other questions tagged measuring-units or ask your own question.

1
Unit of measurement for services
0
What do I call physical quantities if they are not physical?
1
Unit prefix of zeroth power
6
Why isn't the yard used as a base unit for measuring heights?
0
Should I capitalize the abbreviation for a unit of measurement?
1
Term for a “unit-ed” (versus “unitless”) quantity