Term for "Improvement During Isolation"

I'm looking for a term (ideally, word) to describe an event or its main participant. In military, athletic, or heroic stories a person may be set apart from others to improve. This question was inspired by reading Orson Scott Cards's Ender's Game. The summary from Wikipedia says:

[Colonel Hyrum] Graff... offers [Andrew "Ender" Wiggin] a place in the Battle School, situated in Earth's orbit, where Graff quickly isolates Ender from the other cadets, but encourages him to continue training despite frustration...

The solitude I want to describe also has its place in philosophical and spiritual works. In philosophy, there is Henry David Thoreau's retreat to Walden Pond, about which he says:

I went to the woods because I wished to live deliberately, to front only the essential facts of life, and see if I could not learn what it had to teach, and not, when I came to die, discover that I had not lived.

And the Christian Messiah spent 40 days and nights in the Judaean desert, where he was tempted.

This seclusion may not be total, allowing for a trainer or emotional support. Examples include:

The isolation need not be voluntary. The IMDb synopsis of 2002's film The Count of Monte Cristo says of prisoners Dantes and Abbe Faria:

Dantes befriends a fellow prisoner named Abbe Faria (Harris), who is a great scholar and who, very gradually, transforms the unworldly Dantes into a wise, learned and cultivated man.

I would like an emphasis on isolation; there may not be an opportunity to do other things for a while. The work to improve during the seclusion is trying (or rigorous) and sustained over a period of time. I can't remember if Daniel in The Karate Kid, for example, spent the summer with Mr. Miyagi, which I would consider isolation, or visited him after school, which is less so.

And I consider Bruce Wayne's training under Henri Ducard at the League of Shadows headquarters in Batman Begins to be isolation, even though there are many other people there. Because those other characters are peripheral, the effort to improve Bruce seems as focused as Eliza Doolittle's in My Fair Lady or Alejandro's in The Mask of Zorro.

The best words I know, metamorphosis and transformation, by themselves emphasize the change (or improvement) but not the isolation. An analogy can be made with metamorphosis and a caterpillar turning into a butterfly, but until it's made my audience may not know that that's what I'm getting at.

Other terms I can think of are too general or too specific: Back-to-basics and meditation, for example, are about specific types of self-improvement that can be done during solitude; others are synonyms for solitude, which itself can be isolation for any number of reasons, like

Is there a term, preferably word, that more concisely expresses "isolation for the sake of (self-)improvement"?

One word you might consider for this is purdah.

The practice in certain Muslim and Hindu societies of screening women from men or strangers, especially by means of a curtain:
he never required them to observe purdah
she was supposed to be in purdah upstairs

A state of seclusion or secrecy:
the supermarket’s own self-imposed purdah on the GM issue
expect the lawyers to re-emerge from their temporary purdah when the legislation is published

While the word was originally to do with the religious segregation of the sexes, it's been expanded in Western culture to include any seclusion, usually temporary, and usually while working on something (like what to do about genetically-modified food in the above example). In the UK, the Chancellor of the Exchequer traditionally goes into purdah before the annual Budget statement, when he effectively locks himself away to do the number-crunching.

In a religious context, consider:

Anchorite: "someone who, for religious reasons, withdraws from secular society so as to be able to lead an intensely prayer-oriented, ascetic, and—circumstances permitting—Eucharist-focused life" (http://en.wikipedia.org/wiki/Anchorite)

Asceticism can be considered. It involves positive solitude and self-improvement practices. It is usually a religious discipline but not necessarily, it is also a life-style.

Asceticism describes a lifestyle characterized by abstinence from worldly pleasures, often for the purpose of pursuing spiritual goals.

There are two types of asceticism, relative and ultimate, and each of these having mundane and spiritual varieties: 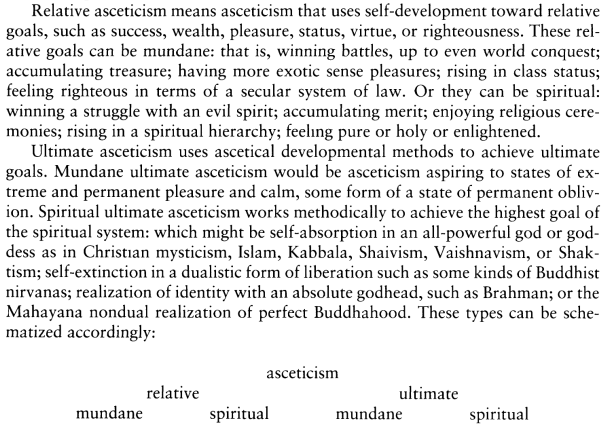 Also, solitude is often used in positive sense as opposed to loneliness and isolation. But to be more specific, you can consider the phrase positive solitude which is self-explanatory. Wikipedia mentions the positive psychological effects of solitude as below:

Another proven benefit to time given in solitude is the development of self. When a person spends time in solitude from others, they may experience changes to their self-concept. This can also help a person to form or discover their identity without any outside distractions. Solitude also provides time for contemplation, growth in personal spirituality, and self-examination.

In the Ender's Game example, it wouldn't work too well, because Ender is still in the same setting, just isolated from other people. However, you could say that Rocky was on a "training sabbatical" with his trainer and brother-in-law.

In recent times, "sabbatical" has come to mean any extended absence in the career of an individual in order to achieve something. In the modern sense, one takes sabbatical typically to fulfill some goal, e.g., writing a book or travelling extensively for research.

How about the modern term "me-time"?

18
Term for Only "Unbelieved Warner"
2
What's a more common term for "penny jumping"?
3
Single word for a "like brothers" relationship
0
Term for a trainer who conducts training by outer standard programs
19
Word or phrase for tasking an expert with jobs that a novice could do
2
Term for an anti-theft/anti-loss feature seen on pens
2
Word(s) for "Workflow Optimizer"