What does “having the mad dumps” mean in this context?

one judge actually sat in judgment on his own case where the wife was accused, among other things, of having the mad dumps, silently, for three days

This is taken from a piece voicing disapproval against the ease with which divorce could be granted in late 19th century US.

In this context, "having the mad dumps" means "farted incessantly" for three days (and "... silently" means they were silent but deadly).

Chasing references from your "Annual Session of the Baptist Congress" to "The Canada Law Journal: A Magazine of Jurisprudence, Volume 3", to its citation, "Thirty-eight State Laws of Marriage and Divorce in the United States (in 1882)", to the ultimate citation "American Law Review, Vol. II. p. 189", they all treat this case as extraordinary, and in some way, singular.

But the review of the case is very light, and of the salient details reported, only two things stand out: that the plaintiff was also the judge presiding over his own divorce case, and the phrase "mad dumps", retained and emphasized in every reference to this case.

Certainly a judge presiding over his own divorce case is singular and extraordinary, but that fact alone is insufficient; for one thing, the Annual Session of the Baptist Congress is decrying the ease with which a divorce can be procured for frivolous reasons, and the only fact it cites in this case is the "mad dumps".

Second, the July 24th edition of the Brooklyn Daily Eagle reported on this case in its miscellaneous items column, and didn't even mention the husband was also the judge, only that he was divorcing his wife for having the mad dumps, which it describes (being a tongue-in-cheek column) as harrowing: 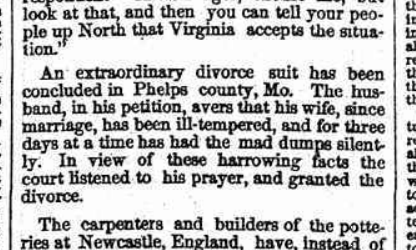 What makes it all the funnier is the interval during which the case was tried was ostensibly reserved for criminal, not civil, cases: the judge/husband's implication being his wife's behavior was criminal.

"But what's the connection between dumps and farts", you ask, in all innocence?

Looking through old compendiums of slang, it turns out the senses of "down in the dumps" (i.e. depressed), "taking a dump" (defecating), and "having the dumps" (flatulent) are all related in an interesting way.

The connection to flatulence and defecation from the original and most common meaning "to unload" is self-evident, but the connection to depression is not so obvious. The common thread is that someone who is suffering from stomach discomfort is often ill-tempered, cranky, or unhappy.

From Cassell's Dictionary of Slang, for example:

Thus, when you wanted to describe someone as unhappy, you might figuratively say he was in "the dumps" (that is, acting as though he had a stomach ache).