What is a group of cars on the road called?

For rental agencies and companies, the cars owned would be a fleet. Several cars escorting a VIP would be a motorcade.

However, what if I want to say:

Is there a good collective noun that would apply to this situation? Or would it be a matter of choosing a general term, like group, cluster, block etc.

Since there appears to be no exact technical term for a bunch of independent cars traveling together on a thoroughfare, you will have to go with broader terminology. I would prefer to say group of cars (which is what you started with) or even just cars as Oldcat proposed. Since there isn't a specialized term for it, many variations of this will be understood just as well.

I dislike being the lone driver in an empty stretch of highway, so I may end up speeding to get from the cars behind me to the cars in front.

A common word as a collective noun is line (as in a line of cars). With this word, you can also specifically mean the cars on your lane but it can be used for the row of cars on all lanes. Though, it might mean a production line of cars also in a business context.

Based on your example, I searched "line of cars behind" and "line of cars in front" in Google Books and there are a lot of hits. Some example usages from the results:

About this time someone noticed that a couple of huge semi trucks had become entangled in the line of cars behind us.

The drivers in the long line of cars behind them, tried very hard not to get lost on their way to the resort.

There was a line of cars in front of him, inching slowly forward.

I also found a blog site which addresses the same question and tries to answer in detail. Traffic also comes to the mind of author but he explains why it cannot be a collective noun for cars as below and he also comes up with a lot of suggestions as a collective noun:

I thought perhaps “traffic” might be the appropriate collective noun. But in his book Traffic: Why We Drive the Way We Do, Tom Vanderbilt explains that the word “traffic” originally referred to trade and the movement of goods, and was a positive word. Then it came to also refer to the people who were moving goods. And as “traffic” meant people moving things to trade, it all came to mean people moving vehicles in pursuit of commerce. Which is pretty much what it means today, since the worst traffic jams occur as millions of people try to get to work. In any event, “traffic” means cars and people, so it cannot be the right collective noun for cars.

Finally, it is worth to mention mayhem but it is not commonly used as a collective noun and it also has a sense of traffic mayhem which is a more commonly used phrase.

The book "A Compendium of Collective Nouns: From an Armory of Aardvarks to a Zeal of Zebras" (By Woop Studios, Jay Sacher) mentions mayhem along with fleet and stack as a collective noun for cars. As you said, fleet is mainly used in business context and stack is mainly used for the cars that are piled up on top of each other in a junkyard. 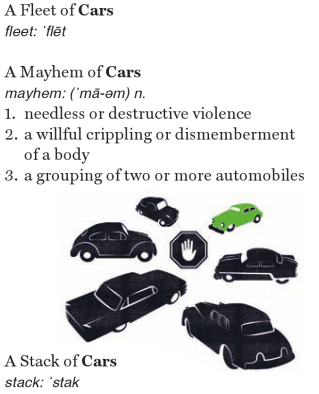 With the cheapest gasoline in the world and no traffic laws or speed limits, the Nigerian highways are a mayhem of cars overtaking each other to the left and right.

[Camping with the Prince and Other Tales of Science in Africa By Thomas A. Bass - 1990]

To drivers who have endured the mayhem of cars, motorbikes, barrows and container trucks that clog the alternative route, the new road looks like an obvious moneyspinner.

In traffic engineering and driver's ed, I've heard a group of cars referred to as a "platoon".

I've called them clots for decades, as they jam up the traffic arteries. I am not alone in such usage. Also, Urban dictionary:

thus everyone slows down, won't go ahead, and a "clot" of cars is created by the cop.

They make for dangerous driving, as clot dynamics are subject to the behavior of the worst driver in the clot.

I prefer clump as it implies something a little more arbitrary and organic than cluster.

A quick search of traffic modelling discussions found this paper which confirms my use of clump.

"Traffic wave" would seem to be more a matter of behavior of the entire stream of traffic, and a feature or result of interruptions in the flow.

If you look at the uses of the word in medicine (from Wikipedia), a bolus of medication is a clump of liquid that occurs upon initial injection.

So, a clump of cars moving along the highway could be called a "traffic bolus". Or at least that is my story and I am sticking to it.

Convoy is also suitable, though it’s more often used for a stream of associated military vehicles. It can be applied to non-military traffic as well.

A procession of cars.

A group of persons, vehicles, or objects moving along in an orderly, formal manner.

Surprisingly no one yet has suggested jam. Jam is an assembly of traffickers from which one would wish to escape only to run into the back of yet another.

See also Peloton (bicycles) which gives draft (racecars) as in he is in the lead draft of cars and platoon (http://en.wikipedia.org/wiki/Platoon) which appears to be a hybrid of draft, which might explain one's desire to move from pack to pack to improve mileage and safety.

There is a word in use for this common phenomenon, but it's hardly universal:

I'm sitting in traffic or cruising along in an endless pocket of cars doing little more than 55mph.

This is a coined expression, which was inspired by the Italian term, flusso, often used in conjunction with traffic, and we talk about the flow of traffic too.

I dislike being the lone driver in an empty stretch of highway, so I may end up speeding to get from the flux of cars behind me to the flux in front.

Alternatively, continuing with the theme of water...

I dislike being the lone driver in an empty stretch of highway, so I may end up speeding to get from the tide of cars behind me to the tide in front.

Usually,cars on roads travel in rows or line, the collective noun used for vehicles in a row or line is, a fleet of. Therefore, I think we can use a fleet of cars.

For me any group of cars on the road is TRAFFIC.

Gradually, using well timed Lane changes and some aggressive tailgating, I worked my way to the front of the pack of too slow cars. I finally broke free of them, only within minutes to find myself feeling naked and alone on the road. So I sped up even more to catch up with yet another pack of cars moving along, well, just too damned slowly. So I started all over again.

RobRob
9
3
Add a comment  |
Highly active question. Earn 10 reputation (not counting the association bonus) in order to answer this question. The reputation requirement helps protect this question from spam and non-answer activity.