“He does more than (is) necessary.”

Can someone diagram the sentences

Also, there seems to be a secondary clause in the sentences (or at least in 2): what's the name of that kind of clause?

I don't expect this is a final answer, but it may propel some of the grammarians/linguists here to fix it. Just learning what I could from the internet, I attempted to emulate the trees I found, abusing the labels & other conventions, I'm sure. But I think the essence of the question is illustrated: where does that pesky "is" come from? My instinct is that it is deep in the grammar, as my totally non-conventional diagram suggests. 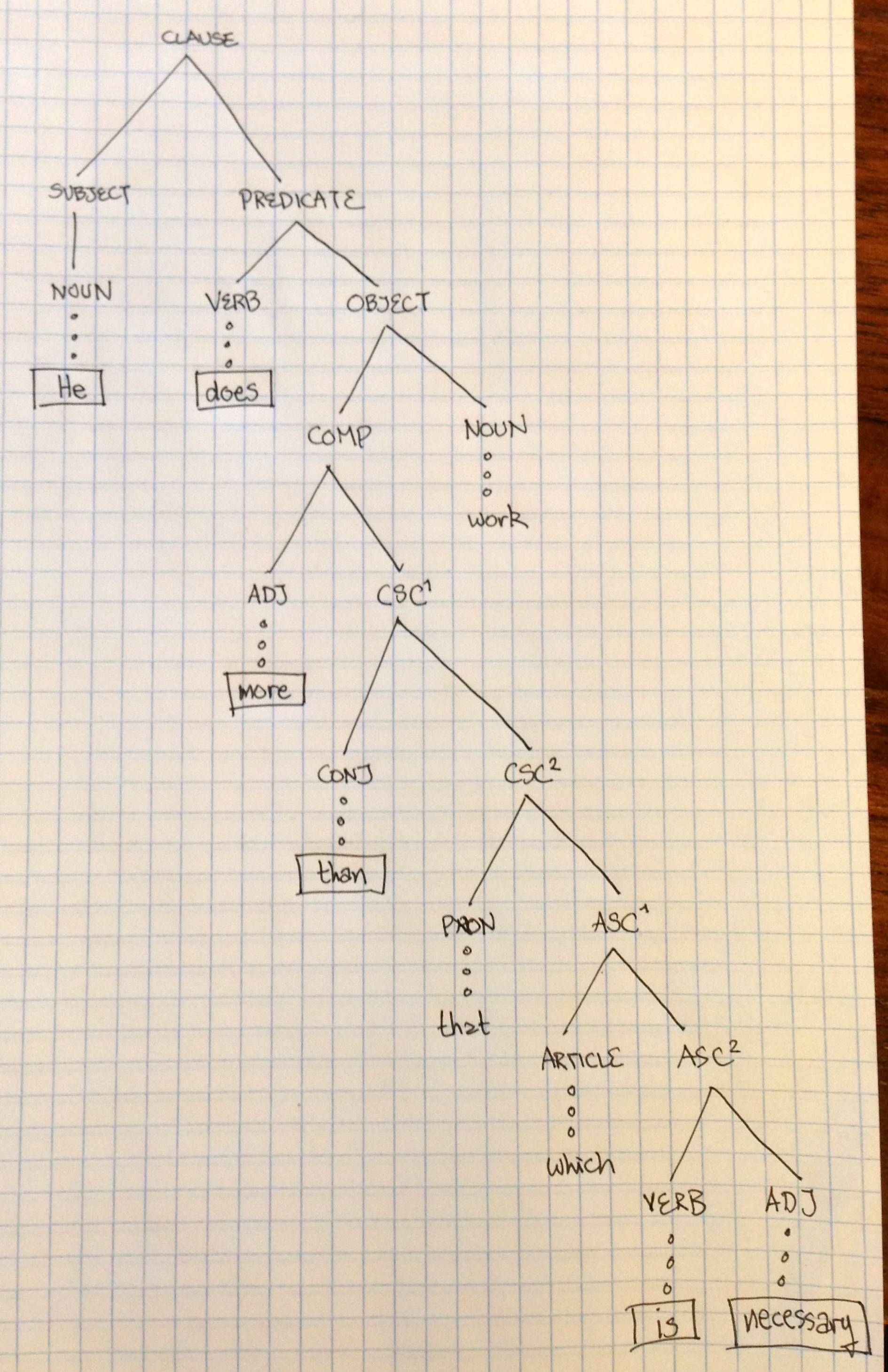 About the clause question, they are both Subordinate Comparative Clauses. You know it because it is introduced by the nexus "more ... than or more than".

EDIT: The Clause is the smallest unit that has a "complete sense" (it carries a complete and logic meaning).

The simple clause (usually, they are not mandatory but this can change according to how a certain language works and is structured) consists of a subject and a predicate (i.e. verb):

Then you have the "complex" clauses (not sure how they are called in English), which have a Main clause and one or more subordinate clauses.

Dogs that are being bothered bark.

The bold part is the subordinate, it extends the meaning of the main clause, in this case it's not mandatory, the main clause (Dogs bark) can stay by itself, but in other cases subordinates are mandatory (the asterisk indicates something wrong):

It may be imperfect but more or less this is a general explanation about clauses.

I haven't really used this form before, but I think possibly:

(Sentence: He does more than necessary)

(Sentence: He does more than is necessary)

(V: does)(AdvP: more than is necessary)

In the first sentence, 'he does more than necessary', it can be interpreted as he does more work than necessary work(Imply the word 'work'). So in this case it need not contain a subordinate clause. So the total sentence is the principal clause.

Not the answer you're looking for? Browse other questions tagged syntax or ask your own question.

0
A question on this common sentence structure
3
Necessary relative followed by to-infinitive … conflict of level
1
“Prefer to” or “Prefer than”?
1
how to continue a sentence after a line breaking example
5
Why is there no definite article in this sentence?
10
“Don't mind what she does tomorrow” but not “Don't know what she does tomorrow” Why?
0
Verb form after “when” referring to the future
0
What is the scope of the quantifier “some”?
11
How does the “reverse syntax” in Middle English work?