Why does “smashing” mean “very good”?

Smashing is a BrE slang which means "very good" or "impressive". Most folks might know this already, due to its use as a catch phrase by various BrE characters in media.

However, from the usual meaning of the word smash (which means breaking with violence), it's not obvious how it could come to mean "very good". Did this meaning come from a specific context, perhaps military, or sports?

According to Etymonlime the term smashing has undergone the change in meaning like other terms such as: fabulous ( see below).

A smash in tennis:

"Smashing" is a bastardized version of the Irish phrase "Is maith sin," which means "that's good." It's pronounced "iss MAH shin" or "iss MY shin," depending on where in Ireland you are. The Brits appropriated it ;)

Source: I speak Irish. If you want "independent verification," you can pick up any beginner's book for learning Irish - Buntús Cainte is one that comes to mind. Or, you can simply believe the several different commenters here who have pointed to its Irish meaning and origin (except for the person claiming that "ag smashalach" is a thing - methinks this was an Irishman taking the piss for a bit of craic, haha). The person who says it's Scottish is probably correct as well - there's a fair amount of crossover between these two branches of the language, only the pronunciations tend to be different.

would this suffice as evidence. there are several words borrowed from celtic languages to modern day english, not all of these will be in the dictionary. Likewise I'm not sure you could find "evidence" of these phrases originating in gaelic speaking areas - like scotland and ireland. There was also large population movements from rural areas of scotland to other parts of the UK, northern US and austrailasia, so if this expression crops up in oz, NZ and canada I think this would add weight to this argument

I'll just go ahead and post an answer (same as Mari's) since I want to express it slightly differently.

(Point 1B) Regarding the timing of "smash records" in the entertainment industry, I'm going to go ahead and guess since the 1920s[1]

(Lucky guess by me!)

(Point 3) PURELY IN MY OPINION - I'VE ALWAYS JUST ASSUMED THIS, the general use of "smashing" (synonym of "good") comes from this use of "smash" in the entertainment industry.

[1] my authority on that statement is that: I have read Julie Andrews autobiography, Home.

I believe the actual stem is an anglicised version of the Irish term 'ag smashalach' which means the same general thing and exists in Irish literature from the 1300s. That is an incorrect spelling of the Irish term as I haven't actually studied the language in 5 years.

's math sin is a Scottish gaelic phrase that means "Great!". It literally means "that is good" and is pronounced shih-mah-sheen. It is possible that smashing comes from this phrase.

The slang smash means a great success and was first used in the world of entertainment.

If a musical, play, or film is a smash, it means it is hugely successful. Whenever a show or movie rakes in more money than its leading predecessor we hear the claim: breaks box office record. In this instance break, which is synonymous with smash, has positive connotations.

Later in the world of rock'n'roll and pop we hear of songs hitting the charts and being called smash hits. So it's not difficult to see how a smash (hit) could eventually evolve into the adjective smashing [= great] or vice versa.

smash noun: someone or something that is very successful or popular
- the sound made when something hits a surface very violently
- a hard downward hit in tennis or other games

Origin of SMASH
perhaps blend of smack and mash
First Known Use: 1725

Etymonline states clearly that smashing meaning "pleasing, sensational" is from 1911. While smash meaning "great success" is from 1923

I don't believe smashing derives from the famous tennis shot. In tennis a smash is a ball hit with such force, speed and power that can leave the opponent "defeated", inasmuch as the player fails to return the shot. Smash is onomatopoeic, it describes the sound of the ball hitting the ground, metaphorically it "shatters" the court. From the website, The History of Tennis—The Origins of Tennis, we learn

The 1919 edition of the Oxford English Dictionary [link] has no record of smashing meaning sensational, wonderful or excellent. Instead its authors defines it as being a verbal substantive (vbl.sb) formed on the meaning of the verb smash

Smash v.1 [Probably imitative: Norw. dial. smaska to crush, slaa i smask to knock to smash (Ross).]
2. To break (anything) in pieces violently; to dash to pieces; to crush, shatter, or shiver.
3. To dash or fling (anything) with noise and violence; to batter; to cause to strike hard.

The noun smash is described as being dialect or colloquial: A hard or heavy blow

There's no mention of it meaning a success. However, the OED 1919 edition has some information on the noun smasher

Is 1858 long enough ago to claim an earliest usage of "smashing"?

Just when you thought "smashing" in the sense described wasn't used before 1911, The Coopers' Journal Volume 21 (September 1905) (page 241 of the scan) shows an advert with the slogan "A Smashing Trade", and the text

I don't think anybody is doing a smashing trade in slack barrel stock at present, but I think I am getting my share and maybe a little more. 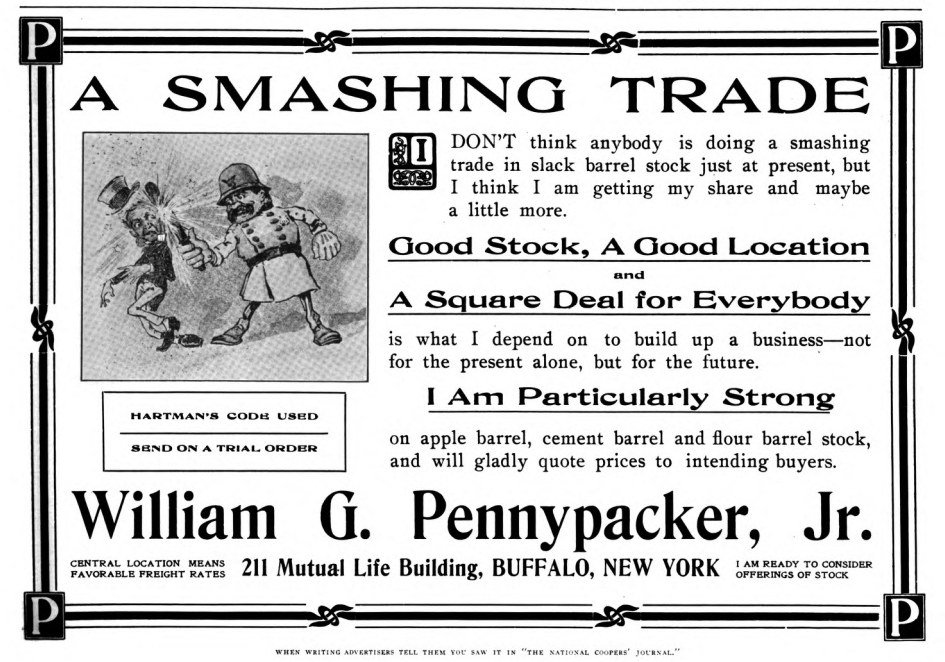 And in 1901, volume one of Gail Hamilton's Life in Letters was published,including (on page 154) the following extract:

On closer inspection, it turns out that that passage comes from a letter written on Feb 15th, 1858. I am not yet entirely certain whether the book is a compilation of genuine letters, or a work of fiction. Can anyone advise? Either way, we have 1901 or 1858.

Both these extracts seem to go against the suggestion that "smashing" is a purely BrE word. I would assume that it has simply fallen further out of favour in the USA, while we Britons continue to cling on to some older, and perhaps more quaint, superlatives.

It came from the gaelic irish, which is said is mash sin or pronounced in english iss mash shin which in old irish means very good, great, or something of great significance etc. Originated from irish immigrants to the UK and has transformed into smashing.

Not the answer you're looking for? Browse other questions tagged etymology british-english slang or ask your own question.