So I saw a post on a funny pictures site... 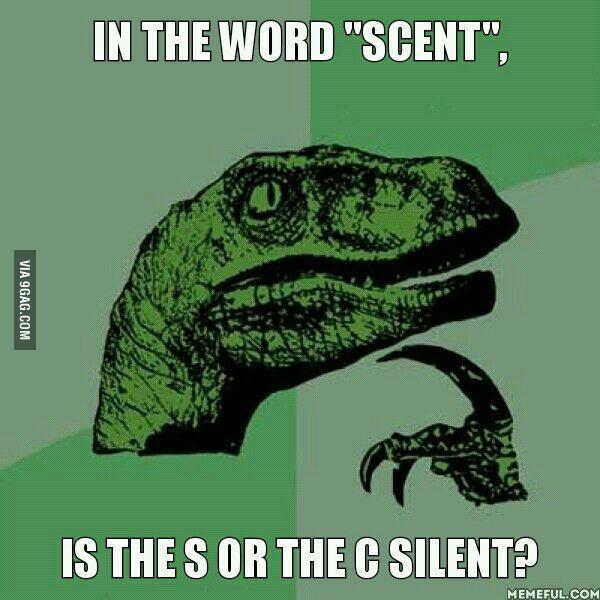 In particular, how does the pronunciation of "scent" differ from "cent" and "sent"?

Small audio references would help me in particular.

User dawnhunter of Reddit writes in the /r/Showerthoughts/ thread called In the word "scent", is it the S or the C that is silent?:

Here's what a google search brings up:

late Middle English (denoting the sense of smell): from Old French sentir ‘perceive, smell,’ from Latin sentire . The addition of -c- (in the 17th century) is unexplained.

So the c is silent and also shouldn't really be there.

The 'c' was probably added because that was the style at the time.

Originally a hunting term. The -c- appeared 17c., perhaps by influence of ascent, descent, etc., or by influence of science. This was a tendency in early Modern English, also in scythe and for a time threatening to make scite and scituate.

Stating this entry at etymonline.com as the source

Speakers of the Queen's English have no trouble with this; if neither letter in "scent"were silent, it would be pronounced like the beginning of "sceptic". Actually, the C is silent, making the word (to all but Professor Higgins-level phoneticians) identical to "sent". Coincidentally, there is a funny little foreign coin, cent, that is pronounced the same way.

(I understand the question may be harder for those across the Atlantic; that is just one of the many disavantages of having left the British Empire all those years ago.)

The "s" and the "c" together make a softer "s" sound. Compared to the words "sent" and "cent", the word "scent" sounds more like "sscent."

Similar to the words "ascent" and "assent", where assent has a harder and faster sound.

Neither letter is silent. Both make the same sound /s/ And when two identical sounds are put together in the same word English, they are almost always said as if they were one sound. So we say [s] instead of [ss].

The fact that the C was added later is irrelevant, as it was likely added because it would not change the pronunciation of the word.

Analyzing a letter as being silent is more of a last resort thing, what you do when no other rule of English orthography will work.

Not the answer you're looking for? Browse other questions tagged pronunciation silent-letters or ask your own question.

4
How did English come to use a writing system which makes spelling it so hard?

8
Is the -re "supposed" to be silent in the pronunciation of "macabre"?
27
Silent "w" in words starting with "wr-"
12
How do "you" pronounce eczema?
17
Silent "e" at the end of words
31
Is there an etymological explanation for the silent ‘g’ in “paradigm”?
1
Why is the L silent in "walk" but not in "bulk"?
1
Does the suffix -ify have any inherent characteristics of making letters pronounced which would otherwise be silent?