Idiom for "just because you give something a different name, it doesn't change what it is"

I'm looking for a way to idiomatically express the sentiment that just because you give something a different name, or precede it with a disclaimer, it doesn't change what it is, e.g.:

A rose by any other name would smell as sweet. [Shakespeare]

(What matters is what something is, not what it is called. [Phrase Finder] )

Possibly inappropriate for an attempted cover-up.

If the focus is on the attempt to disguise what's about to follow,

to [attempt to] make something bad seem less unpleasant The government have cut income tax to sweeten the pill of a tough budget.

"You can put lipstick on a pig, but it's still a pig."

Seems perfect for your requirements but perhaps a little too colloquial.

Do you like Shakespeare? If so, how about "A rose by any other name would smell as sweet", or, shorter these days, "A rose is a rose is a rose." 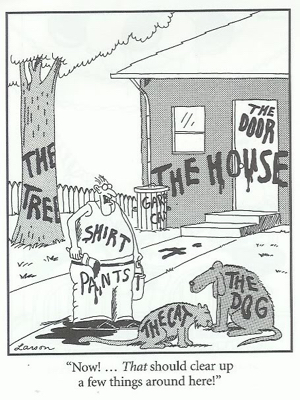 Abraham Lincoln (apocryphally) was fond of asking "How many legs does a horse have, if you call its tail a leg?"

His answer: "Four. Calling a tail a leg doesn't make it one."

Call a spade a spade.

It has the advantage of being a direct command.

'Spade' is a more specific word for the digging implement most people own, which often called by the less specific word 'shovel' by those unaccustomed to digging (and thus of higher class). It is also very occasionally used to mean 'Black'.

It disparages political correctness, choosing longer words over shorter ones, and speaking class-consciously.

My dear sainted grandmother was very fond of the expression "You can't polish a turd" which is a somewhat vulgar variant of @Okoning's "lipstick on a pig".

Idiomatically, someone who claims that 'they aren't racist but...' could well be accused of "turd polishing..."

My favorite: "A distinction without a difference."

"To-may-to, to-mah-to." (In English the word "tomato" can be pronounced either way, it's the same vegetable fruit berry.)

I'd suggest "terminological inexactitude", but now that I look it up, I find that my idea of its origin was not quite right. Winston Churchill coined it, but I thought he was referring to someone's use of the phrase "protected workers" to describe people who were, plainly, slaves. Used that way it's a beautiful euphemism for a euphemism (you're not calling them slaves, and I'm not calling you a liar). But now I find that he was actually arguing the other way, saying that it's wrong to use "slavery" referring to people who have voluntarily entered a temporary state of paid servitude. (As often happens with quotes, I like the false legend better than the true history.)

There are other expressions and quotations suited to particular kinds of self-contradiction or false disclaimer, e.g. "With all due respect, mind your own damned business.", "The honourable gentleman is a scurvy cur."

While you are looking for an idiom, the examples you give seem to be a mild form of apophasis, a form of irony

a rhetorical device wherein the speaker or writer brings up a subject by either denying it, or denying that it should be brought up [Wikipedia]

I come to bury Caesar, not to praise him.

Your examples are disingenuous denials.

I see a couple of people mentioned Shakespeare, but if you want to quote Shakespeare you should say "What's in a name? A rose by any other word would smell as sweet." If you say "by any other name" you're quoting one of his folio editor's mistakes.

There are a number of animals that have been used for these sort of metaphors that are in in some cases idioms. The oldest is derived from the Bible (changing one's skin/spots/stripes). There are a number of expressions related to pigs tracing back to the 16th century, but picking up variety in the 1900s American rural communities and recently adopted by a number of politicians. There is a famous expression related to ducks which began with the anti-communist fever in the post-war 1940s (despite a typical misleading reference from Wikopedia). Finally there are animals which the smell of indicates detecting deception or falsehood, like smelling a rat or fish.

2) "the tiger cannot change its stripes"

3) "a zebra cannot change its stripes"

3) "A hog in a silk waistcoat is still a hog" (Charles H. Spurgeon in his 1887 compendium of proverbs, The Salt-Cellars)

5) "Never try to teach a pig to sing - it wastes your time and annoys the pig." (Robert A. Heinlein's 1973 novel Time Enough for Love)

10) "Just weighing a pig doesn't fatten it" (Barrack Obama 2009, which he said he heard in Illinois rural communities)

Sources include: Slate and PiFactoryBlog

"when I see a bird that quacks like a duck, walks like a duck, has feathers and webbed feet and associates with ducks—I’m certainly going to assumer that he IS a duck." (Emil Mazey 1946)

"Two other cases the witness mentioned, in the first of which he alleged that the judge, in reference to an insufficiency of evidence said, 'I smell a rat; I don't believe the defendant or her witness.'"

Don't spit on my cupcakes and call it frosting!

Your spit is not icing, and I won't let you convince me it is!

In all three situations, the appropriate response is to draw attention to their disingenuous labeling: Don't spit on my cupcakes and call it frosting! Right here in 2011, AlexG offered an excellent explanation of that idiom in its various iterations, showing that it satisfies this query perfectly. In summary:

The nuance of the expression is that something bad is being presented as something good, and the speaker is aware of this.

Various images have employed this of this formula for an entire generation:

Senator: The war's over. Our side won the war. Now we must busy ourselves winning the peace...

Fletcher: There's another old saying, Senator: Don't piss down my back and tell me it's raining.

It's not sweet rain; it's vile piss! Applying Fletcher's sentiment to the OP's examples:

The are multiple iterations of the image.
Don't piss/pee on/down/in . my:

and tell me it's raining."

Don't spit in my face and tell me it's raining.

Conclusion:
It's not sweet; it's disgusting! In view of the OP's particular examples, I believe the image of sweetness would work best.

But you can decide what works best for you.

This is procatalepsis, the refuting of anticipated objections, according to Brigham Young's excellent Silva Rhetoricae.

In the examples given by the OP, the refutations are quite crude — really just ad lapidem — but I think this rhetorical figure fits the bill.

The one I have heard that I use in the right company only is:

You can't make chicken salad out of chicken shit.

No matter what you say xyz is still true...

xyz is still true, no matter what you say

Not the answer you're looking for? Browse other questions tagged idioms phrase-requests idiom-requests or ask your own question.

1
"A rose by any other name would smell as sweet" but with a more negative connotation
67
What is it called when someone says something like: "I'm not a racist, but..."
43
What is meant by "don't piss on my boots and tell me it's raining"?

22
What is a term for someone who doesn't know what they haven't experienced?
2
Name for someone who believes that sciences is more than just descriptive
0
Term for subconsciously assuming something to be true just because it is noted down somewhere
2
Word or phrase: To convince others to do wrong
1
Another phrase for "jumping on the bandwagon"
0
Idiom or Synonym for Someone who looks/feels like you could trust them, like they are someone reliable?
6
Word or phrase for a person who does something because a loved one asks, not because it's necessarily correct
1
Term for thinking you can't do something?