Is there a word for a combination of utopia and dystopia?

There are a number of works that depict an ostensibly utopian society which has elements of or is arguably a dystopia (such as Huxley's Brave New World or what Orwell's Nineteen Eighty-Four's Airstrip One alleges itself to be). Is there a term for this?

Here the distinction between a dystopia and a negative utopia is significant. George Orwell's 1984, for example, imagines a culture in which pleasure is withheld; in Brave New World, pleasure is imposed. Since Orwell writes about mass culture from an internal perspective, the reader views it as invasive, exploitative and dispiriting. Orwell does not generally show the reader pleasurable effects of the mass culture he denounces. Huxley's "negative utopia" takes more representational risks by beckoning its reader to imagine the allure of what is also ultimately a repressive mechanism of social control.

The Problem with Pleasure: Modernism and Its Discontents By Laura Frost

This genre can also be considered as a sub-genre of speculative fiction which is an umbrella term encompassing the more fantastical fiction genres. For example, Margaret Atwood, the author of The Handmaid's Tale, prefers to use the term speculative fiction for her novel and considers this term as a fiction about things that really could happen. 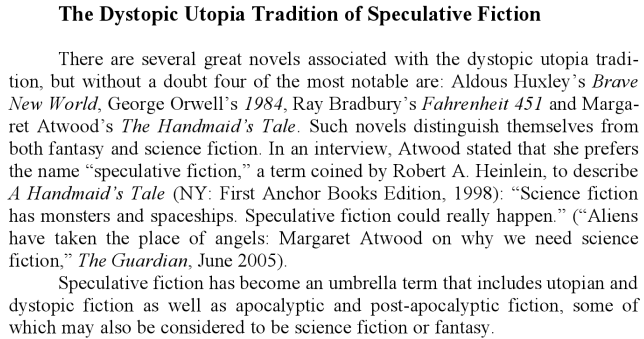 What I mean to say is, that was the point in More's smart-ass, sarcastic, book.

When you use Utopia, you use it as a negative.

It's just like saying "dreamland" -- "maybe in dreamland," "oh that will work, in dreamland."

Not the answer you're looking for? Browse other questions tagged word-choice single-word-requests terminology or ask your own question.

7
What is considered a dystopia?
5
Synonyms for “content” in publishing
2
A word or phrase for a non-military attack on a country's home soil
0
Term for both utopias and dystopias?
4
A word to describe a concept between 'utopia' and 'dystopia'
7
Is there a specific word for a cross-language mondegreen?
5
Is there a word for “weaponized political correctness”?