Which way of writing the word: "Email" or "e-mail" is correct? Both variants seem to be in wide use. If both ones are okay, maybe there is a difference in contexts they have been used (one is more formal than the other)?

Both e-mail and email are in standard use at this point, although e-mail retains a vast majority of usage in edited, published writing according to my research using the Corpus of Contemporary American English (COCA).

Here are the current results counts in COCA for various categories of English:

Obviously the “spoken” totals don’t represent any kind of actual usage but rather the policies of the organizations that transcribed the spoken data, so I also included a total that excludes the spoken examples. So, in (edited, published) fiction, magazines, newspapers, and academic writing we find that the traditional e-mail outnumbers incidences of email by more than 8.5 to 1. COCA includes data starting from 1990.

Now that we have established that e-mail retains the position of preferred usage by a very large margin, let’s look at trends over time. These numbers are in incidences per million words (rather than total incidences):

This is a graphical representation showing the data over time: 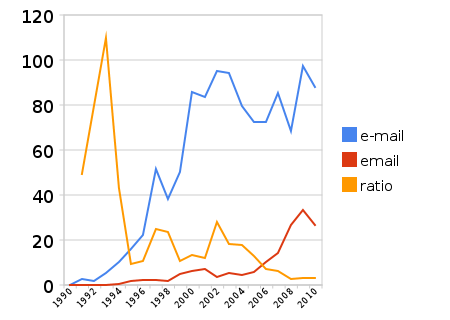 What does all this tell us? We see a word whose spelling is in transition. It is not clear whether email will eventually reach and surpass e-mail. For the time being, e-mail has retained its position as the preferred usage by a factor of three to one over the past few years. The numbers can change very quickly and email may win out in five years, or it may stay a minority usage for a long time. Only time will tell. In the meantime, you are in good company if you use e-mail. That’s what I use.

I created a Google N-gram which compares instances of e-mail with email in the Google Books corpus between 1988 and 2008, and it does seem that e-mail hit a peak around 2004, and has been in decline since, though it remains significantly more common than email.

Curiously, when you look in the country-specific corpora, you find that the gap is wider in American English and narrower in British English:

Both are correct and common. I'd recommend the shorter and simpler email.

There seems to be a tendency to drop hyphen as a newly coined word becomes more and more commonplace:

That is what I've read earlier somewhere, and looking around I now found at least this quote by Donald Knuth to support the claim:

Newly coined nonce words of English are often spelled with a hyphen, but the hyphen disappears when the words become widely used. For example, people used to write "non-zero" and "soft-ware" instead of "nonzero" and "software"; the same trend has occurred for hundreds of other words. Thus it's high time for everybody to stop using the archaic spelling "e-mail". Think of how many keystrokes you will save in your lifetime if you stop now! The form "email" has been well established in England for several years, so I am amazed to see Americans being overly conservative in this regard.

Even if you ignore that, overwhelming evidence seems to suggest that "email" is the form that everyone is likely to eventually settle upon (so you might just as well go with that now):

That said, if you deliberately want to sound ultra-formal or ceremonial, go with "electronic mail". :-)

Google, Yahoo and Apple use "email". USAToday, CNN and the New York Times use "e-mail".

According to wikipedia: There are several spelling variations that occasionally prove cause for surprisingly vehement disagreement.

Our tech magazine switched from e-mail to email (and from e-book to ebook) within the past year, over the vigorous opposition of the copy editors.

The copy editors' position was that e-mail preserves the special status of the "e" as the sole surviving remnant of an entire word (electronic), as do the spellings A-bomb ("A" for atomic), B-boy ("B" for break), C-section ("C" for cesarean), f-stop ("f" for focal), g-force ("g" for gravity), H-bomb ("H" for hydrogen). M-day ("M" for mobilization), n-type ("n" for negative), P-wave ("P" for pressure), R-value ("R" for resistance), and T-bill ("T" for Treasury). The only arguable exception to this pattern that I'm aware of (aside from the disputed email and ebook) is Xmas ("X" [standing in for chi] for Christ)--and that example has problems of its own, starting with the fact that it's a shortened form of a word that is already closed up).

The copy editors further argued that the vast majority of the 55 "e-" words that had shown up at least once in articles for our magazine over the previous ten years benefited from hyphenation as a way to clarify to readers that the words bore the sense "electronic." Here are some of those terms: e-banking, e-based, e-billing, e-book, e-card, e-census, e-commerce, e-crime, e-customers, e-dating, e-education, e-entertainment, e-filing, e-finance, e-government, e-health, e-ink, e-learning, e-lending, e-magazine [sometimes e-zine], e-money, e-music, e-newspaper, e-payments, e-privacy, e-reader, e-recycling [sometimes e-cycling], e-retailer [sometimes e-tailer], e-schools, e-services, e-shoppers, e-tax, e-ticketing, e-travel, e-voting, e-wallet, e-waste, e-work. As a matter of consistency, the copy editors argued, we should handle all "e-for-electronic" constructions the same way--and realistically that would mean hyphenating all of them, since no one was advocating for ebased, eeducation, eink, eretailer, or ewaste.

The countervailing argument was that spelling e-mail with a hyphen made us look old-fashioned, and that maintaining a broadly consistent approach to punctuation was overrated.

Here's a radical idea: Maybe all of these words of the G-man ("G" for government) type aren't "compound words" as we normally understand that term. Maybe instead they're a special class of contractions, with three distinguishing characteristics:

One point in favor of interpreting these words as contractions is that in their spelled-out form they are neither hyphenated nor closed up: cesarean section, electronic mail, hydrogen bomb. The same characteristic applies to he will, is not, and we had. One very strong argument against doing so is that, as Mr. Scott says, "It's never been done." In any event, contractions tend not to lose their identifying punctuation, which puts them on a very different footing from the nonce words (such as "soft-ware" and "bee-keeper") that other answerers have mentioned.

The New Oxford American Dictionary reports that the word is e-mail, but also email.

Wiktionary has a voice for e-mail where it's reported email as alternative spelling, and the following note:

The spellings e-mail and email are both in common use. The use of email is now more widespread, likely due to one less character and thus making it easier to write or type, and is becoming a standardized usage for most businesses and Internet users. In general, the hyphenated form is more likely to be considered proper by those who follow strict grammatical rules; however, as a recently coined word, it remains an unsettled matter at this point.

A note on email versus e-mail

Newly coined nonce words of English are often spelled with a hyphen, but the hyphen disappears when the words become widely used. For example, people used to write non-zero and soft-ware instead of nonzero and software; the same trend has occurred for hundreds of other words.

Thus it's high time for everybody to stop using the archaic spelling e-mail. Think of how many keystrokes you will save in your lifetime if you stop now! The form email has been well established in England for several years, so I am amazed to see Americans being overly conservative in this regard.

(Of course, email has been a familiar word in France, Germany, and the Netherlands much longer than in England --- but for an entirely different reason.)

Using "email" is fine and probably more common in English, but do be aware that many languages that borrow from English only use "e-mail" because "email" is already a different word in Dutch, French, etc.

Email (with no hyphen). See Thousands of hyphens perish as English marches on:

About 16,000 words have succumbed to pressures of the Internet age and lost their hyphens in a new edition of the Shorter Oxford English Dictionary.

Bumble-bee is now bumblebee, ice-cream is ice cream and pot-belly is pot belly.

Researchers examined a corpus of more than 2 billion words, consisting of full sentences that appeared in newspapers, books, Web sites and blogs from 2000 onwards. For the most part, the dictionary dropped hyphens from compound nouns, which were unified in a single word (e.g. pigeonhole) or split into two (e.g. test tube).

For personal use, both forms are perfectly acceptable. However, in professional use, check with your company to see if they have a style guide and what it says for email. My company specifies email as the "proper" use.

E-mail is short for "electronic mail." Usually for words of this form -- a compound word in which the first word is shortened to a single letter -- the hyphen remains. Compare, for example, U-boat.

I also think keeping the hyphen makes more sense given the pronunciation of the word: EE-mail, not em-AIL.

E-mail is still considered standard English in formal writing, but give it a few years, and email will probably take over.

I would go with email, e-mail is obsolete now from what I've seen. As J.R. points out in a comment, consistency is the key.

If you wanted to be absolutely sure, you could look at the recipient's website or business card and use the same version they do.

The entry in the OED is for email. My Internet company was involved in getting the OED online and I got to know the OED's Chief Editor. In 1997 I pleaded with him to change the entry to e-mail, because it's a shortened form of "electronic mail".

He said that the OED entry reflected what people used now which, back in 1997, had moved to email.

AP Style is now email, with no hyphen. They made the announcement in March 2011.

Time for a Google Fight!!! Okay, it would appear, surprisingly enough... that e-mail took round 1!!!

Yes, this issue is far from resolved, but I would go with e-mail if you're writing anything that will end up in print. In addition, everywhere in Outlook (an e-mail client) the word shows up as e-mail.

For now... "e-mail" appears to be the correct spelling.

Not the answer you're looking for? Browse other questions tagged word-choice orthography hyphenation email or ask your own question.

0
Is it acceptable to write "mini-steps" or should it be "mini steps? Can it be "mini-mangoes" or must it be "mini mangoes"?
0
In a formal document, may the hyphen be omitted from "e-mail"?
12
Is “laser-focused” a new word?
2
Should " we studied it both on- and off-site" have both hyphens?
2
"Testbed" or "test bed"?
1
ebike or e-bike? Which one is correct?
0
When to use under and over as prefixes rather than adverbs with past participles

16
When ending an email, should I use "Yours faithfully" or "Best regards"?
2
Is it "out of question" or "out of the question"?
4
"However" vs. "but" — which is more formal?
4
Difference of "I am just an ABC" vs "I am but a XYZ"
25
Timestep, time step, time-step: Which variant to use?
3
How does one formally address and email when the gender of the recipient is unknown?
0
'We communicated a few weeks ago' in an Email