Worshippers of the rising sun

I heard the expression in the title once around 10 years ago, when my English teacher defined it to mean "people who worship wealth, success, and the like". I haven't heard anyone else use it anywhere else. And I can't find this anywhere on the Web today.

I wonder if my memory of the expression is wrong or I was taught wrongly. Can you throw more light on this expression and its usage, if any?

Using Ngram I did find several instances of this phrase used in such a way. Here is one example:

But Louis XIV. still lives, recovers from his lengthened swoon and inquires for Madame de Maintenon, for whom a courier is instantly despatched. The news, the unwelcome news, swiftly reaches the Palais Royal. Immediately the worshippers of the rising sun fly back to pay homage to the setting luminary; whom, in their precipitancy, when but obscured by a passing cloud, they believed already sunk below the horizon.

It seemed to be used most often in a political context to refer, I think, to those eager to seek favor from any new person in power.

Originally, Worshippers of the Rising Sun appears to refer to a Hindu sect and there may be a story there that led to this use of the phrase. I'll keep working on it. Great question.

I found a definition that confirms my guess, but still no background:

Meaning: To be with the successful.

Idiom: To worship the rising sun

Meaning: To respect a man who is coming in power

This reference is from an Indian higher education website, however, so I still suspect there is a story behind the phrase involving Hinduism.

As @Alain points out in his comment, my example reference above is not the best because Louis XIV came to be known as "The Sun King." See @Tragicomic's answer for uses of the phrase in other contexts.

As a native Hindi speaker, and looking at the possible context where the OP might have heard this, this might be a literal translation of a Hindi proverb

The world worships the rising sun, not the setting one.

which uses the same idiom for a person on the ascendancy, albeit in a cynical context.

"To worship the rising sun" seems to mean that people surround and support those whose fortunes are on the way up.

And the people being fickle, and ever ready to worship the rising sun, clapped their hands and cried, 'Twala is king! Now we know that Twala is king!'

This makes the meaning pretty clear, calling the people fickle for switching their loyalties over to "the rising sun".

Here's another from a deliciously quaint gazette way back in 1824: The Telescope

Where are they, when the taint of worldly dishonour has fallen on our heads, and shame, whether deserved or not, has pointed us out for mockery? They have gone to worship the rising sun, and left, perhaps, their former benefactor to pine in gloomy solitude over their ingratitude . . ."

And an excerpt from an article in the New York Times in 1885:

However, the disposition of the party to worship the rising sun is shown in the fact that on Thursday the Democrats in the Senate declined to vote for the resolution saying that the appointment of Mr. McDonald in the Cabinet would be satisfactory to the Indiana Democracy.

The usage of this idiom seems to be mostly outdated, except in Indian English.

Mithras was worshiped as a primary deity during the Roman Republic and much of the Roman Empire, particularly in Byzantium.

There are possibly Hindu and Vedic origins for Mithras as a sun god as well. From an unspecified Vedic hymn 1

...he [Mithras] is invoked with Ormazd, or Ahuramazda, the god of the sky, and is clearly a divinity of light, the protector of truth and the enemy of error and falsehood.

This is a more specific reference 2

In Vedic hymns (Rigveda, III, 59), he [Mithras] is frequently mentioned and is nearly always coupled with Varuna, but beyond the bare occurrence of his name, little is known of him.

The Avesta was more specific than the Vedas, probably because the role of Mithras was more significant in the former. The Avesta is a religious text that is also associated with the rise of Zoroastrianism in Persia. It featured Ormazd as a major deity 1

His worship spread with the empire of the Persians... their belief that the legitimate sovereign reigned by the grace of Ormazd, whose favour was made manifest by the sending of the Hvareno, a celestial aureole of fire, resulted in the doctrine that the Sun was the giver of the Hvareno. Mithras, identified with Sol Invictus at Rome, thus became the giver of authority and victory to the Imperial House... the Sun was the most important of deities; and it was the Sun with whom Mithras was identified.

Mithras probably originated in India. The belief spread, and expanded in scope, to nearby Persia. It continued westward over a period of many centuries, eventually making its way to ancient Rome, and lands that were part of the Roman Empire. This included Germany, and of course Britain. The religion declined in adherents very quickly as of 300 A.D. The historical record has remained intact though e.g. sculptures of Mithras as a sun deity survive through the present day in Rome, on the Capitoline Hill.

This was my rationale for conjecturing that Mithraism could be an antecedent for the expression "worshipers of the rising sun", and maybe for the association with worldly success.

It's possible your English teacher was confusing "sun" with "son": a "rising son" is a young man who is on his way up in the world.

"Rising sun" on the other hand, refers to morning, and is usually used to refer to Japan (日本 nippon meaning "sun origin") whose term for "rising sun" is kyokujitsu (旭日) and who, during World War II, used the following image, kyokujitsu-ki (旭日旗 ) as their battle standard. 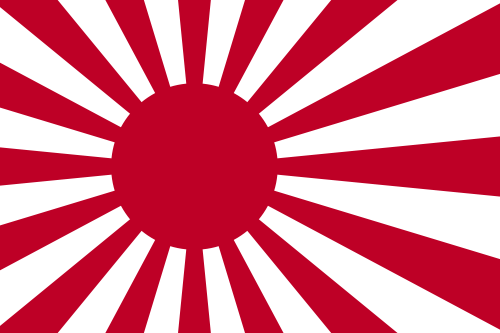 FWIW, heliolatry, and rarely, heliotheism or solarism, are words used to describe the religion, belief, and/or practice of Sun worship. It then follows that a heliolater would be a sun-worshipper. A rising-sun-worshipper would presumably also be included :)

3
Sun shining up a dog’s arse?
1
What is the meaning of the sentence, "we should not roam about in the hot sun"?
4
What is the origin of "the lay of the land?"
20
What is the origin of the idiom 'all the rage'?
3
Is "I like!" a recent idiom? What is its origin?
0
What's the origin of the phrase "fresh off the back"?
0
Rising out of its own momentum
1
How (in-)formal is it to say to "become/get hooked on/by something"? Are there differences in meaning?
1
Idiom "not shot in the head" to indicate a lack of enthusiasm?