Why does the word “tortilla” refer to three distinct types of edibles?

The crisps[BrEn]/chips[AmEn] that are made of corn (and probably not deep-fried) are called tortilla:

The wraps with that special taste, are called tortila:

And then, the omelet-like meal is called tortilla! 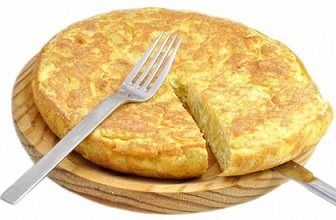 I can understand that the first usage is probably derived from the second, since I saw something saying that frying the wraps, you can make the chips; but the third usage is not related to these two at all.

What's the commonality among these three that has made the English use the same word for all of them? Or is it just a random confusion/carelessness after borrowing the edible + the name from Mexican and Spanish in different periods of time?

I think on one level it's fairly simple: because the Spanish word for all three is the same, too. The Diccionario de la lengua española gives the omelette sense first, with no particular localisation (although it is often called tortilla española and originates from Spain); then the wrap sense, which is localised to Central America, Mexico, Puerto Rico and the Dominican Republic. Tortilla chips (as they are usually called even in British English, in my experience) are just fried corn tortilla wraps, as you say.

The DRAE doesn't give etymologies, but tortilla is diminutive of torta, which generally refers to a round flatbread but also has various other local meanings. It seems that roundness and flat(ish)ness may be all that they have in common.

Getting back to English, I would say that following @Peter Shor's comment, most Brits would also call these tortilla chips, tortillas (or tortilla wraps) and Spanish omelettes, respectively.

In Spanish, the suffixs "illo, illa, ito or ita" mean "small". The word TORTA in Spanish comes from old latin meaning a round bread, cake or pie (sweet or savory), so omeletes are also considered tortas o tortillas. When the Spanish established themselves in America (1500) they called the flat bread "small torta"=tortilla. In Spanish, ALL OVER, tortilla does not mean only the Amerindian flat bread. An egg omelette is called Tortilla de huevos, a spinach omelette is Tortilla de espinaca; a rice cake is Tortita de arroz, etc. Look at these videos from a Mexican cook and a Peruvian cook, two very different countries: Mexico, egg omelette: https://www.youtube.com/watch?v=DNdm2xdhk9w

Enjoy! And now you know that torta, tortilla is NOT only the Amerindian flat bread.

Mine is a distinctly provincial response since I have never traveled to continental Europe. However, I have spent much of my life in the southwest United States. I have never seen the omelet you have pictured for the third usage called a 'tortilla' in the USA. I found it strange to see it so called in your example. A tortilla (at least in my humble experience) is a flat savory bread made with wheat or corn flour and used for myriad dishes including being cut into triangles and fried or baked to make 'chips.'

Not the answer you're looking for? Browse other questions tagged word-choice etymology ambiguity or ask your own question.

6
Why does “sophomore” refer to a second-year student?
7
Why does an ellipsis have three dots?
3
To which 'court' does 'courtyard' refer?
4
Why does caliber refer to a dimension?
15
Where does “A Very British… ” come from?
7
Etymology of the word *plane* as used in *airplane/aeroplane*
2
Dirt in the edibles
4
Does the word “that” refer to “features” or “windows 9x”?