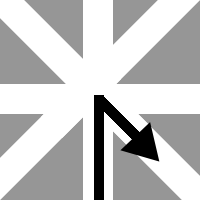 Please see the image. When giving directions, how should I describe what the arrow indicates on the road? My ideas are

I'm not sure if they make sense.

As a curiosity, for the "standard" answer to such questions:

you have to look at the sentence formulas currently read by the two major GPS (sat-nav) makers, TomTom and Garmin.

There is no reason you would do anything other than what the two major platforms do, as a matter of safety and consistency.

It's an interesting curiosity that that is sort of the "new OED", for such issues :)

The OP has said it's not a roundabout, then indeed I think both platforms say [actually I don't remember; but you should use that as your guide].

For whatever software you are working on you should strongly consider the current Garmin/TomTom formulas.

If there is a roundabout in the middle of that crazy intersection, then "Take the first exit" will cover it. Otherwise, "Turn hard right".

Not the answer you're looking for? Browse other questions tagged expressions word-usage direction or ask your own question.

1
Why a u-turn instead of an "n-turn"?
0
"Turn slightly right" or "Turn slight right"
4
Is there a term for the inability to find a word which is then substituted with a "funnier" word?
1
Tennis: when score is even they say: thirty (ou) or five games (ou)
0
Why is text thought to be moving forward to our left while we write to our right?
1
A company's most important person in a specific task
0
What's a word/phrase that can describe going from a detailed perspective to a more general one?