"Personified" in an OED definition

While writing an answer to this question, I looked up the word ennui in the full version of the Oxford English Dictionary. (I'd give you a link, but I access the OED through my local library's proxy service, so it wouldn't work for you; if you have access, go to oed.com and search for "ennui" as a noun). Three senses are given. The first and third senses are normal dictionary definitions with the customary example sentences, but the second, in its entirety, is:

What does this mean? I'm not asking about the word per se—yes, I know what personification is—I'm wondering why the word appears alone here, without elaboration or examples or a clue as to how it pertains to the rest of the entry.

A possible clue: Sense c ("A cause of ennui") is accompanied by four example sentences, the first two of which contain personifications of ennui:

Have these two examples simply been attributed to the wrong sense, or is something else going on here? Does anyone have access to the print version to check?

I presume the intent is to express that ennui means the same thing, "a cause of ennui", in both the sense of Personification and in the concrete sense.

As I was stumbling about in old 'poetry' I found this - Ennui Personified and other forms.

It's a poem by William Hayley Esq. A Charm for Ennui. A Matrimonial Ballad.

Snippet taken from The New Foundling Hospital for Wit: Being a Collection of Fugitive Pieces, in Prose and Verse, Not in Any Other Collection. With Several Pieces Never Before Published, Volumes 1-2, published in 1786, page 266. 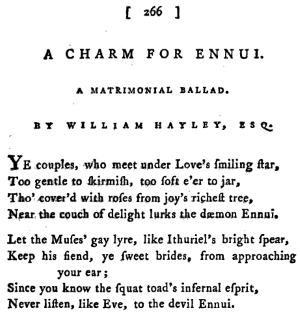 And here is the OED1 printed version - OED1 and OED online are word for word the same. 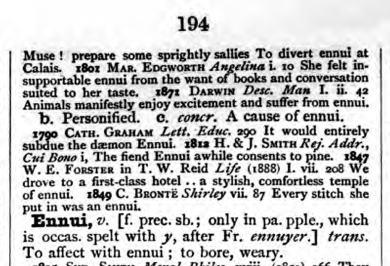 Not the answer you're looking for? Browse other questions tagged dictionaries or ask your own question.

6
Word for not caring at all about anything

2
What would "in modern colourless use" mean in a dictionary definition?
2
What does the abbreviation 'compl.' mean in the Oxford English Dictionary (OED)
3
In the OED, one definition has three explanations separated by a semicolon and two use 'with' in italics: what does it mean?
2
Is this the right definition of literal?