Where did the term “garage band” originate from?

Apart from the video game, the term has been in use amongst musicians for years - where did it come from, documented listings?

As Robusto comments, it's probably just an obvious turn of phrase that could easily have been "re-coined" repeatedly.

As Google NGrams shows, the term had no real currency until the 1980's, but that certainly doesn't mean such bands didn't exist (see this site).

Personally I think that it's quite possible many parents of wannabe rockers (esp. perhaps West Coast Americans) may have used it to describe what their kids get up to on the weekend, even back in the 50's. But it didn't really gain traction until the post-punk era, when the type of music associated with it started to become commercially significant.

The first documented reference I found with the modern meaning is from 1975's Stereo Review, Volume 34:

(There's a possible listing of a band called Tom and Jerry Smith's Garage Band in a 1971 JEMF quarterly, but this can't readily be confirmed, nor whether it's related to practising in a garage. There was also a Smith's Garage Fiddle Band, also known as Smith's Garage Band, who recorded in 1928 but we can't easily link this to the modern usage.)

How about the related garage rock? A 1978 Billboard announces the opening of the Paradise Garage Rock 'N' Roll Club: 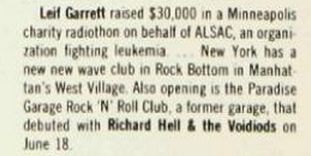 The earliest examples of the term "garage band" that I could find are from two articles printed in Rolling Stone magazine in 1971:

"On the former the group is content to faithfully recite the original arrangement, which act, in these dark days of Blood, Sweat & Tears, Keith Emerson, and every last punk teenage garage band having its Own Original Approach, is awfully refreshing."

"It can't quite be called bad, since it's pretty clear that the Dead have progressed so far beyond your average garage band that there's no danger of them ever slipping back, but it still can provide a bit of a letdown for those who have come to expect only great things from the grate."

(The second reference is particularly interesting, as it's written by Lenny Kaye, who would produce the 1972 compilation album, Nuggets, which is typically cited as the album that kicked off the garage rock revival. By the late 1970s, the term "garage rock" would come to refer to this particular brand of 60s rock and roll, although the Nuggets album does not use the term at all--confusingly referring to the bands featured in the album as "punk rock". Of course, punk rock would eventually come to refer to an entirely new, still burgeoning genre of rock music.)

We're a garage band/ We come from garageland.

Though not the first published reference of the term garage band, it is a significant example of the popularization of the term.

The inspiration of the song as recounted by Joe Strummer[1]:

...After our second gig a critic in New Musical Express wrote that we should be returned to the garage and locked in with a motor running so that we died. "Garageland" is about that. I was trying to say that this is where we come from and we know it, and we're not going to get out of our depth. Even though we've signed with C.B.S. we aren’t going to float off into the atmosphere like the Pink Floyd or anything.