I was walking through the square, and I came upon a group of people all lying on the ground. Each had a printout on their chest with a political message, and nobody was moving. 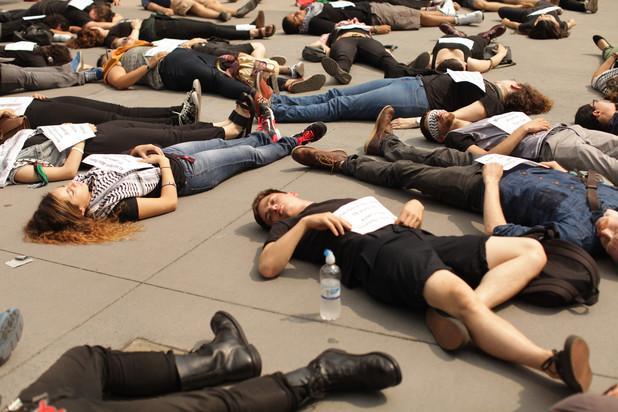 What word or phrase could best be used to describe a group of people who lie down in a public place in order to send a political message?

Answered very nicely by Kristina Lopez in a comment:

This looks like a "lie-in" protest demonstration - sometimes also called a "die-in". The protestors lie down in an area, representing dead people, sometimes having signs or banners on their bodies, as your picture appears to show. en.wikipedia.org/wiki/Die-in

From Oxford Dictionaries the following definitions of satyagrahi and satyagraha :

A person who practises the policy of satyagraha: ‘as a satyagrahi, suffering in the path of freedom and justice was part of his creed’

[mass noun] A policy of passive political resistance, especially that advocated by Mahatma Gandhi against British rule in India.

If you are looking for the commonly used contemporary terminology, it seems to me that your inquiry has been answered. So I feel you may be searching for a new phrase that is a nuanced descriptive of a "lie-in" or "die-in" (as suggested in your title, "describing a group of people...")

One could riff on the old by creating something new:

to try to overcome; struggle against or contend with

The demonstrators are vying to overcome some perceived injustice, vying in a struggle for a voice, vying as an act of contention against powers whose eyes and ears are closed to their needs or opinions or rights. They are vying with the words affixed to their very bodies, with their bodies affixed to the very ground, as an expression of the power that a dead body holds ubiquitously, as a spector which must be seen, acknowledged, respected, and responded to. So that their voices may be seen, acknowledged, respected and responded to.

Not the answer you're looking for? Browse other questions tagged single-word-requests expressions or ask your own question.

3
Word for a public place where people frequently come in contact with one another
2
Describing a group consisting of groups of people
2
Word to describe a crowd fallen to the ground?
2
A more general version of "projecting"
12
The term for the person/group a political party aligns themselves with to appear concerned about the general public
0
Word/phrase that represents "unknowingly Arguing against something/explaining something based on false statement X given"
0
Looking for 2 words or phrases to describe this situation
4
Seeking a word with specific connotations of excessive, unashamed hypocrisy
1
What is a word for altering the public perception/interpretation of a word or concept?